Xu Jiayin and Ma Huateng join forces: Evergrande Motor is approaching 480 billion, what is it like to join hands with Tencent? 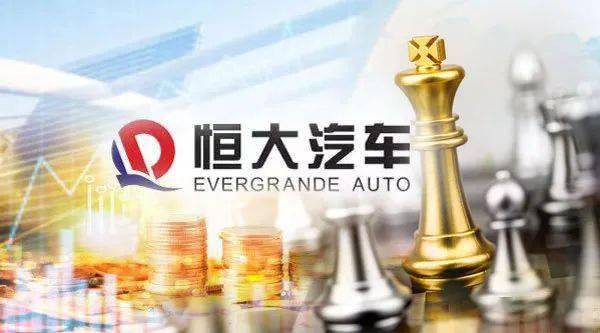 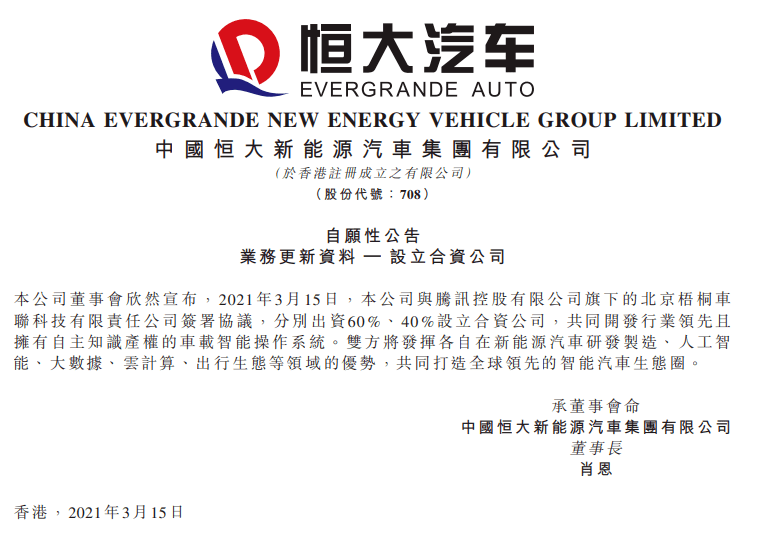 On March 15, Evergrande Auto’s stock price rose 5.21% to HK$53.5. The latest market value of Evergrande is close to HK$480 billion, crushing traditional car companies, second only to BYD, Wei Come to the car, approaching the sum of SAIC and Great Wall Motor. 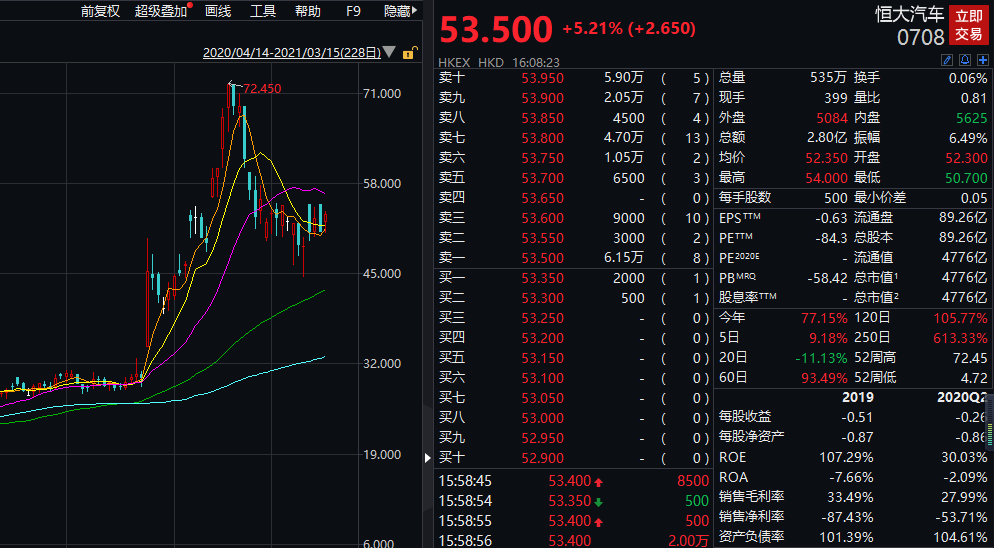 It is worth noting that since June 12, 2020, although one car has not been sold, the Shares have risen 672%. At present, the market value of Evergrande Auto is 2.4 times that of the real estate company China Evergrande.

It is understood that this is not the first time Evergrande and Tencent have joined forces in the field of new energy vehicles. In September last year, Evergrande Automobile announced that it would raise HK$4 billion, and Tencent became one of its major shareholders. At present, Evergrande has carried out in-depth cooperation with Tencent on the development of an in-vehicle intelligent operating system. The establishment of the joint venture company will jointly develop the Hengchi intelligent operating system and create the world's leading intelligent car ecosystem.

Since the second half of 2020, Evergrande's car-building activities have continued, causing the stock price to soar many times.

On August 3, 2020, Evergrande Auto released 6 models at the same time, namely Hengchi 1, Hengchi 2, Hengchi 3, Hengchi 4, Hengchi 5 and Hengchi 6, 6 The models cover all model levels from A to D, as well as a full range of subdivided models such as sedans, SUVs, MPVs, and crossovers.

On September 18, 2020, Evergrande Automobile announced that the company plans to issue RMB shares and list on the Shanghai Stock Exchange Science and Technology Innovation Board to allot and issue no more than 1.556 billion shares.

On September 15, 2020, Evergrande Automobile announced that it would raise nearly HK$4 billion through placement of new shares to support the development of its new energy vehicle business. The list of investors includes Tencent, Didi Chuxing, Sequoia Capital, Yunfeng Fund and other Internet giants and top investment institutions.

On the evening of January 24, 2021, Evergrande Automobile issued an announcement,Private placement of 952 million new shares to 6 investors, attracting a total of 26 billion Hong Kong dollars, which is also one of the largest equity financing in the new energy vehicle industry. On the second day after the announcement, Evergrande’s share price soared 51.67%, and its market value soared to nearly HK$400 billion.

On the evening of February 3, 2021, Evergrande Automobile announced that the winter calibration test of Hengchi Automobile will be officially launched at the Yakeshi Test Base of China Automobile Research Institute on the same day, and Xu Jiayin will personally supervise the battle. On the second day, Evergrande’s stock price rose 13%.

China Evergrande has encountered a wave of crisis

In 2020, China Evergrande, a listed real estate company under Xu Jiayin, has encountered a wave of crisis and once faced a situation of "double killing of stocks and debts".

On September 24, 2020, related documents about Evergrande were released from the Internet. That night, China Evergrande's official website urgently issued a relevant statement saying that recently, rumors about the reorganization of our company have been circulating on the Internet. Relevant documents and screenshots are fabricated out of thin air and are purely slanderous, causing serious damage to our company's goodwill. The company strongly condemned and reported the case to the public security organs.

On the evening of September 25, 2020, China Evergrande announced on the Hong Kong Stock Exchange that as of September 24, 2020, the company's interest-bearing liabilities had decreased by about 53.4 billion yuan compared with the end of March 2020, and the financing Costs decreased by 2.24 percentage points, and 43.5 billion yuan of loans due after September 25, 2020 were repaid in advance, and various debt reductions achieved positive and significant results.

On January 18 this year, China Evergrande announced that it will use its own funds to repay the principal and interest of HK$18.352 billion of convertible bonds due in 2023 in advance. From September last year to January 18 this year, Evergrande used its own funds to repay its debts in advance four times, with a cumulative debt repayment of over 47.7 billion Hong Kong dollars.

Analysts pointed out that at the beginning of the new year, Evergrande once again repaid its debts in advance, which reflects the company's financial strength and firm determination to reduce debts, and lays the foundation for achieving the goal of "reducing interest-bearing debts by 150 billion this year".

Since 2020, the sales of new energy vehicles have soared, and the market value of related companies has also soared.

In the whole year of 2020, the overall sales volume of China's auto market fell by 2% year-on-year, but the sales of new energy vehicles rose against the trend, with a sales volume of 1.367 million units, an increase of 10.9% year-on-year, and the auto market accounted for about 5.4%. According to the requirements of the national "New Energy Vehicle Industry Development Plan (2021-2035)" document, the sales of new energy vehicles will reach 20% of the total vehicle sales in 2025, which is nearly 4 times the current level, and there is huge room for imagination.

Since the second half of 2020, the monthly sales of new energy vehicles have been increasing month-on-month and hit a record high. The latest data released by the China Association of Automobile Manufacturers shows that in February 2021, the production and sales of new energy vehicles were 124,000 and 110,000 respectively, an increase of 7.2 times and 5.8 times year-on-year, respectively. This data has refreshed the production and sales history of the month for 8 consecutive months. record.

With the surge in sales, the stocks of new energy vehicle companies are also sought after by the market in 2020, performing an epic market. CICC the new energy vehicle sector index (including NIO, Tesla, BYD A ) increased by 801% for the year.

The huge wealth-making effect has made Internet giants "coveted". They have dropped a number of blockbusters in the automotive field, and they have made a high-profile statement that they are eyeing the big fat new energy vehicle. . Up to now, Baidu and Ali have directly entered the automotive industry as vehicle manufacturers, while Tencent has not directly "built cars", it chooses to cooperate with car companies at the ecological level such as the Internet of Vehicles. In this regard, Tencent's strategy seems to be somewhat similar to Huawei's.

On December 25, 2020, Zhiji Automobile, jointly built by SAIC, Zhangjiang Hi-Tech and Alibaba Group, was registered in Pudong New Area. The registered capital of Zhiji Automobile is 10 billion yuan. Among them, SAIC Group invested 5.4 billion yuan, holding 54% of the equity; Zhangjiang Hi-Tech and Alibaba each invested 1.8 billion yuan, respectively holding 18% of the equity. On January 13, 2021, Zhiji Auto's first SUV model and sedan model were officially unveiled. The new car will be officially launched and delivered in 2022, and the currently planned models are all pure electric vehicles.

On January 11, 2021, Baidu officially announced the establishment of a smart car company to enter the automotive industry as a vehicle manufacturer, and selected Geely Holding Group as the new company's strategic partner. On March 2, 2021, Jidu Automobile Co., Ltd., a smart car company jointly established by Baidu and Geely, was officially announced. According to Tianyancha data, in this new joint venture, Baidu holds 55% and Geely holds 45%.

The BATs who once said that they would not build cars, now only Tencent has not directly ended up "building cars". Analysts believe that Tencent has not yet set foot in vehicle manufacturing, but this does not mean that it will not build its own vehicles in the future. This has many similarities with Baidu and Alibaba, but at a slower pace.

In addition to the above-mentioned Internet giants, the rumors that the technology giant Apple is building a car has also been rumored recently. Earlier, some media reported that as the research and development result of the self-driving car project "Titan Project", Apple in the United States will launch the long-awaited electric car "AppleCar" in September this year.

It is reported that Apple is working hard to find a partner to build the much-anticipated Apple car. According to Citi analysts, Apple has accumulated a large number of automotive-related patents that could bring innovative technologies to upcoming automotive products.

Akio Toyoda, president of Toyota Motor Corporation, recently issued a "warning" to Apple about Apple's production of cars. "The auto industry welcomes new entrants, but after building a car, I want them to be ready to deal with customers and customers for about 40 years," Toyoda told a news conference at the Japan Automobile Manufacturers Association. Various changes." Toyoda said that the automotive business is not just about having the technology to make cars.

Recently, Volkswagen and BMWHigh-level executives have also expressed their views on Apple's car-making. Volkswagen CEO Herbert Diess said in mid-February that Apple's move into the auto industry was a logical move, combining its expertise in software, batteries and design with vast resources. "But nonetheless, we're not afraid, the auto industry is different from the tech industry, and Apple won't take over it overnight."

BMW CFO Nicolas Peter noted that he wasn't concerned about Apple Cars threaten. Nicolas Peter joked, "I slept well every day, competition is a wonderful thing, it helps motivate us, BMW is in a very strong position, and hopefully we can continue to be the industry leader."

Millions of users are watching

A major breakout! India to ban cryptocurrencies with up to 10 years in prison? Bitcoin plunged to $2,000 in an instant, and the world's most bullish asset is going to cool?

A-share sandstorm! "Guangmao" suddenly fell to the limit, core assets evaporated 800 billion, and the stock market became an oasis again? This indicator jumped in early trading, and a liquidity crisis is coming?

Buy, buy, buy! The first foreign-controlled securities company makes a big move, and its shareholding ratio will rise to 67%

A big reversal! The U.S. Department of Defense’s ban on Xiaomi was stopped by the court, and MSCI stated that it will not exclude Xiaomi for the time being! Xiaomi's response: requesting the court to rule that the decree is invalid

Too unexpected! Hu Xiaoming, CEO of Ant Group, announced his resignation after only 15 months in office! He is a veteran of Alipay who created the Alipay small loan and big data loan model.

Broker China is a new media under Securities Times, an authoritative media in the securities market. Reprinting is prohibited, otherwise, corresponding legal responsibilities will be pursued. 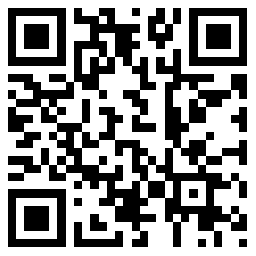