Tencent made 200 million a day in 2017, and its stock price rose 115%! Big banks continue to see high stock prices

Tencent, which earned 226 million a day in the fourth quarter, saw its share price increase by 115% in 2017

The performance is still very bright. However, in the past two days, Ping An of China and Geely Automobile have successively released bright financial reports, but the stock price has fallen. What will happen to Tencent tomorrow?

According to media statistics, in the past three years, 15 financial reports have been released, and 13 stocks have risen sharply. In 2017, Tencent rose by 115%, and its share price rose from HK$189 to HK$406.

Having said that, let’s take a look at Tencent’s 2017 performance first. What are the highlights of the performance? In addition, there are a lot of good things in today's performance briefing.

What are the highlights of Tencent's performance in 2017?

Let's take a look at some data first :

Although Tencent did not mention it It is popular in the circle of friends, but said that the launch of mini-games at the end of last year has further boosted the popularity of mini-programs. As of January 2018, Tencent has launched 580,000 mini-programs with more than 170 million daily active accounts.

4. The daily revenue of Tencent Games is 268 million yuan

5. The number of subscription users of Tencent Video exceeded 56 million

Tencent Video’s mobile daily active accounts exceeded 137 million in the fourth quarter of last year, and the number of subscribers at the end of last year exceeded 56 million.

1. The revenue of games has reached 100 billion yuan, and continues to open up

In the fourth quarter of last year, Tencent’s online game revenue increased The speed has slowed down from the previous month. However, throughout the year, the game business is still very profitable, and the revenue scale is reaching 100 billion yuan, accounting for 40% of Tencent's total annual revenue.

"We continued to maintain strong growth in both smartphone and PC games during the year. On the mobile side, our self-developed multiplayer online tactical competitive game "Honor of Kings" achieved mass popularity , has become the most popular smartphone game in China (by daily active accounts). The game consistently ranks first in the gross-grossing rankings of all app stores in China. With the launch of the overseas version of the game "Arena of Valor" in Southeast Asia, we Some initial successes. We further enhanced our distribution cooperation as the preferred distribution partner in China as a domestic and international smartphone game developer Partner leadership. ”

On the whole, Tencent's game segment has maintained a good growth in both mobile and pc. Mobile smartphone game revenue increased by 59% year-on-year to approximately RMB 16.9 billion. Mainly benefited from existing games such as "Honor of Kings" and new games such as "Contra: Homecoming", "Dragon Nest" and "Classic Tianlong Mobile Games".

The growth rate of traditional PC games is also good. PC game revenue increased by 13% year-on-year to about 12.8 billion yuan. Dungeons and Fighters and League of Legends contributed to the revenue growth.

2. Income from payment-related services and cloud services grew the fastest

Although the game business is very profitable, in terms of business, [other business income] Some are the fastest growing. Last year's revenue increased by 153% year-on-year to 43.338 billion yuan. The scale of this part of the revenue has surpassed [Internet advertising revenue].

Wealth management platform (Wealth Management): As of the end of January 2018, the total asset management scale exceeded 300 billion yuan. It is worth noting that this is the scale of assets under management of Liaitong, which has been included in Tencent’s financial report for the first time.

Guarantee-free consumer loan business (Weidai): As of the end of 2017, the loan balance under management exceeded 100 billion yuan.

Tencent Cloud continues to grow rapidly. Maintain the market-leading position in the vertical field of cloud services (including online games and video cloud services). Artificial intelligence is being used in new areas such as healthcare and translation. Including the launch of an artificial intelligence-assisted diagnosis and treatment imaging product called "Tencent Miying", which is currently used in nearly 100 hospitals in China, and the accuracy of the product for esophageal cancer diagnosis is over 90%. The AI ​​Lab has launched an AI-assisted translation software. Launched a smart retail strategy to empower offline retailers with the help of technical capabilities such as payment, cloud, data analysis and artificial intelligence technologies.

According to Tencent, as of the end of 2017, “other net income totaled RMB 20.140 billion, mainly due to the capital activities of certain investment companies (such as Yixin, Netmarble, Sea, ZhongAn Online and Sogou). IPOs), fair value gains from increased valuations of certain investments (in verticals such as bike-sharing, healthcare and fintech), and subsidies and tax rebates.” 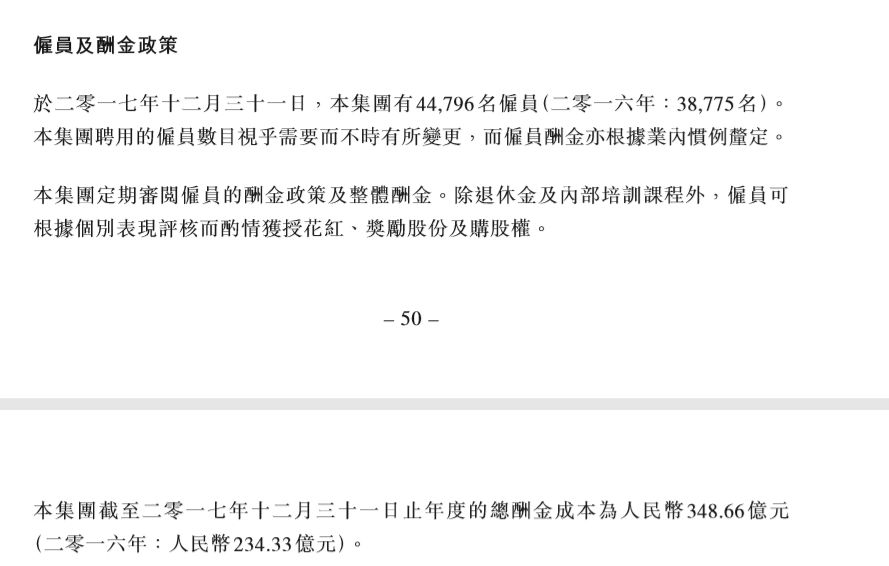 As of 2017 In the year, there were 44,796 Tencent employees, and the total salary paid by Tencent to employees reached 34.866 billion yuan, and the average monthly salary of each employee was 65,000 yuan.

But often averages don't reflect the truth, From Lagou.com, you can roughly understand the salary that an ordinary "programmer" in the background can get. Who raised the average?

You can get a glimpse from Tencent's 2015 annual report:

Tencent's 2015 annual report shows that Tencent ranked among the top 5 highest paid individuals in 2015. , except for one director, one of the remaining four people has an annual salary of 274 million Hong Kong dollars, or about 220 million yuan, that is, an average daily salary of 760,000 Hong Kong dollars, equivalent to 610,000 yuan, see? Knowledge is money, and now I realize it, this is simply a new generation of "worker emperors".

Tencent looks forward to 2018: will be more aggressive

Tencent gives Based on its 2018 outlook and strategy, it intends to adopt a more aggressive investment strategy to enhance its long-term competitive advantages in the fields of online video, payment-related services, cloud services, artificial intelligence technology and smart retail.

- Expand the usage scenarios of payment-related services to promote the use of merchants and users, and develop Internet financial services with partners;

What will the performance presentation say?

Celebrities like Ma Huateng appeared on the stage. Before and after the meeting, many people came forward to take pictures frantically. During the meeting, as long as he raised his head to speak, there would be a crackling sound of the SLR camera shutter. Almost all the photojournalists sat in the row. After the meeting, Ma Huateng exchanged business cards with some reporters and left quickly with the help of the staff. Leaving Liu Chiping alone to continue to communicate with reporters, Liu Chiping kept distributing business cards, answered questions patiently, and had a gentle attitude.

Tencent has always been a hot stock, and its stock price has risen sharply. Liu Chiping has received a lot of equity incentives, and he has also reduced his holdings and cashed out a lot.

The current hot spot in the market is CDR. Ma Huateng said that if conditions are ripe and other conditions allow, he will consider issuing CDRs.

Liu Chiping also mentioned this topic when he talked about the spin-off of subsidiaries for listing. He believes that some IPOs of invested companies are suitable for domestic and some overseas. Of course, CDR is the best of both worlds. He said that there are very few companies to be listed by spin-off. Last year, only China Literature was listed. There are certain expectations for the listing of the music sector. Although these businesses are controlled, they have also undergone mergers and acquisitions, and the shareholder structure is also suitable for listing separately. In addition, Tencent has invested in many companies, accounting for The proportion of shares is not small, and the listing of these companies is dominated by themselves.

Another hot topic, blockchain, is also involved. Ma Huateng said that blockchain is a hot topic, and everyone is talking about it. Many game companies are issuing digital currency. Anyone can issue currency. Dangerous things, Tencent will not send. He believes that the blockchain technology is very innovative and can be used in aspects such as traceability of bills. It will take a while to see how it will develop.

Games are one of the most asked topics, This is naturally related to Tencent's status as the king of games, including the relationship between mobile games and PC games, the progress of the introduction and review of chicken-eating games, and the space for games. It takes a lot of time to protect teenagers. He said that this is a project he personally grasped. The current anti-addiction protection is mainly on the PC side, and the mobile phone side has not been implemented much. Tencent launched the anti-addiction system last year, and children under 12 can only play every day. One hour, no more play after 9pm, no trumpet to escape addiction.

Ma Huateng was also asked about the competition with Alibaba. This question has been asked many times by reporters before. Ma Huateng believes that each company has its own advantages, otherwise it will not survive to this day and can maintain its own characteristics. , what Tencent wants to do is to provide users with tools.

Regarding smart retail, Chiping Lau said that Tencent does not control retailers, but only provides support solutions for retailers, and the retailers are still operating. After that, Ma Huateng added, "We don't do retail, we don't get involved in business, we only do business. Do hydropower and provide connectivity." This is the standard answer, and Tencent has made similar statements many times before.

Mobile payment is conducive to consolidating Tencent's platform advantages. Liu Chiping said that social software is basically saturated in China, but there is still room for extended services based on it, such as mobile payment, such as small games. Last year, the number of QQ monthly active accounts reached 783 million, a year-on-year decrease of 9.8%.

Tencent has repeatedly expressed its position as a tool to help partners grow, and has also made a lot of efforts to this end. For example, Tencent's open platform is a big stage provided by Tencent for developers. Developers can use various OpenAPIs provided by Tencent's open platform to develop excellent and creative social games and practical tools, and bring huge traffic and income to applications through Tencent's social platform. Tencent Maker Space unites forces from all walks of life, integrates Tencent's internal resources, and builds an all-factor incubation and acceleration crowd-creation platform with the help of the Double Hundred Plan, Maker Competition, Qingteng Entrepreneurship Camp, Entrepreneurship Base and other entrepreneurship boosters to help entrepreneurs realize entrepreneurship. Dream, there have been many successful cases.

Tencent's revenue and profits are already so high, and it is truly amazing that Tencent can maintain such a good performance. Business, etc., performance will not be involved at all.

This is a briefing session that is not mixed with emotional colors. The executives answer questions as accurately and practically as engineers, without making mistakes. (e company)