The food and beverage sector continues to be popular, and the first-line leading stocks have changed hands!

Original title: The food and beverage sector continues to be popular, and the first-line leading stocks have changed hands!

Shunxin Agriculture soared 7.78%, the latest closing price hit a record high, and the increase during the year expanded to 77.6%, topping the food and beverage sector's increase list for the year.

The food and beverage sector resumed its activity today, the sector index rose 3.6%, leading the industry sector, and the latest index re-stands on all moving averages. In addition, the food and beverage index also changed from a decline last week to an increase during the year. On the disk, 20 food and beverage stocks rose by more than 5%, including Weilong, Laobaiganjiu, Pearl River Beer, Gujing Gongjiu, and Qingqing Barley Wine.

It is worth mentioning that after the continuous rise, some food and beverage stocks recently closed at record highs, such as Gujing Gongjiu, Kouzijiao, Shunxin Agriculture, Tsingtao Beer, Jinshiyuan, and Taoli Bread. In terms of capital, it can also be seen that the market favors the food and beverage sector.

According to the data,

Wuliangye and Kweichow Mao, the leaders of the liquor industry, have net inflows of 313 million yuan and 196 million yuan respectively. 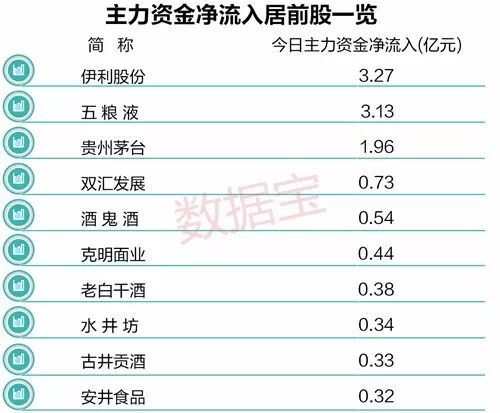 Shunxin Agriculture leads the list of gainers during the year

Market performance from the year Look, compared with last year, there have been some subtle changes in

the individual stocks in the food and beverage sector. The first-tier leaders in the liquor industry have weakened, and the second- and third-tier liquor stocks have expanded. In addition, other food segments except liquor Stocks performed well. The data shows that since the beginning of this year, excluding the secondary new stocks listed this year, 44 stocks have achieved a rise in stock prices during the year, accounting for nearly half, and 19 stocks have increased by more than 20% during the year.

Shunxin Agriculture's cumulative increase of 77.6% led the way. The stock did not perform well in the market last year, and its cumulative decline last year was 12.22%. Since the end of March, the share price of Shunxin Agriculture has been rising all the way. Today, it rose 7.78%, and the latest closing price hit a record high. Affected by the expansion of the liquor sales market and the increase in sales volume and sales revenue, Shunxin Agriculture achieved a profit of 366 million yuan in the first quarter, an increase of 94.61% over the same period of the previous year.

Yanjin Puzi rose 74.15% during the year, ranking after Shunxin Agriculture, the stock has recently attracted market attention. Since mid-May, the stock has continued to be active. It fell more than 7% at one point, and closed up 3.18% in late trading. The latest closing price hit a new high in nearly a year.

Anjing Foods, another sub-industry that is food comprehensive, increased by 62.39%. The top non-liquor stocks during the year include Taoli Bread, Chongqing Beer, Fuling Mustard, Huatong, and Tsingtao Beer.

Some food and beverage stocks performed poorly during the year, such as Jiajia Foods, *ST Huangtai, Bright Dairy, Shenshenbao A, Lanzhou Yellow River, Delis, and Lotus Health. *ST Huangtai, whose performance has continued to decline in recent years, has suffered the largest decline, with a cumulative decline of 52.31% this year.

As demand in the food sector picks up, the liquor industry is still the most concerned.

Since the end of 2017, all industries including beer, beverages, and dairy products have begun to raise prices. Recently, data from the Liquor Industry Association showed that in 2016, the sub-high-end revenue accounted for 7%-8% of the liquor industry, and the market size was about 46 billion yuan. Driven by consumption upgrade, 15-16 yearsThe sub-high-end growth rate is about 10%, and it is expected that the sub-high-end scale is expected to reach 55-60 billion yuan in 2018.

According to the interim performance forecast disclosed by listed companies,

Data treasure statistics found that more than 70% of food and beverage stocks Net profit is expected to achieve year-on-year growth, and the median net profit of 7 shares is expected to increase by more than 50%.

Haixin Foods is expected to have the highest increase in net profit. The company expects a net profit of RMB 8 million to RMB 13 million in the first half of this year, turning losses into profits over the same period of the previous year.

Shuangta Foods, Jialong Co., Ltd., Keming Noodles, and Missing You are expected to have higher net profit growth. Among liquor stocks, Yanghe expects a net profit of 4.69 billion yuan to 5.081 billion yuan in the first half of this year, an increase of 20% to 30% over the same period last year.

Disclaimer: All the information content of the data treasure does not constitute investment advice, the stock market is risky, and investment should be cautious.