"Liquor belief" loose? The most bullish sector is shocked to see the limit drop in batches, the dragon and tiger list institutions are fleeing, and nearly half of the respondents have fallen

Release Time:2022-06-14 Topic:Institutions appearing on the limit-down board Reading：69 Navigation：Stock Liao information > Food > "Liquor belief" loose? The most bullish sector is shocked to see the limit drop in batches, the dragon and tiger list institutions are fleeing, and nearly half of the respondents have fallen phone-reading

Some investors' belief in liquor stocks seems to be loosening. On the 23rd, the stock price of liquor stocks surged. In the poll on the outlook for liquor stocks initiated by the Times on the evening of the 23rd, 44% of the participants chose to be safe.

Following the huge shock on the 23rd, on the 24th, the wine industry stocks further suffered a collective plunge, and the stocks fell by the limit on a large scale.

Liquor stocks suffered another collective plunge: the liquor index hit the biggest drop since December, and more than 10 stocks collectively fell by the limit 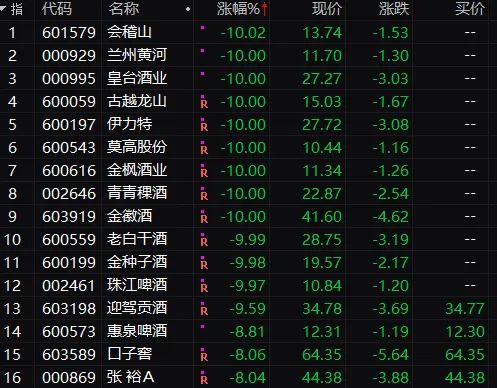 ST was willing to drop the limit for the second consecutive trading day. Although it was opened for a time in the morning of the 24th, it soon sealed the limit to close. 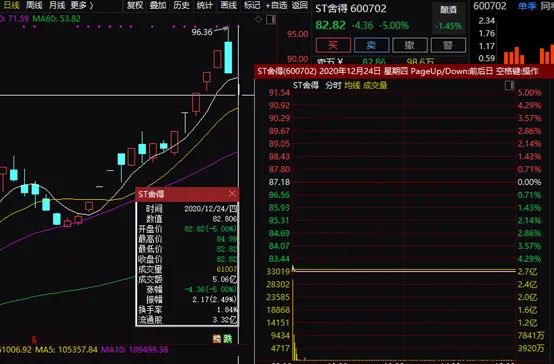 The yellow wine stocks such as Kuaiji Mountain and Guyue Longshan (600059, stock bar) were firmly locked down, but the trading volume was reduced.

The second- and third-tier liquor stocks that have been continuously hyped in the early stage have generally fallen sharply. Among them, Jinfeng Wine (600616, stock bar) and Golden Seed Wine (600199, stock bar) have closed down the limit most of the day. Statistics show that the second- and third-tier liquor stocks are the one with the largest increase in the year, and many of them have more than doubled their share prices during the year.

The China Securities Liquor Index fell 2.12%, its biggest one-day drop since December, led by a sharp drop in most liquor stocks.

Judging from the situation of the after-hours dragon and tiger list of many plummeting wine stocks on the 24th, it is mainly the hot money seats that are participating in the fight. Among the institutional seats on the list, the selling strength is greater than the buying strength. 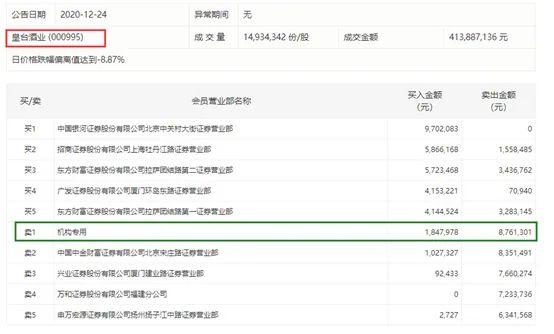 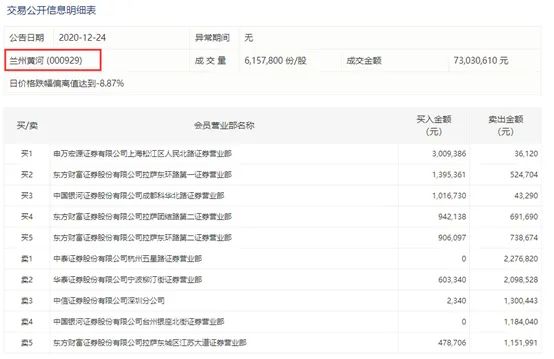 On December 23, the day before, a similar situation occurred in Guyue Longshan, a popular liquor stock. On that day, the top five seats of the buyer were all seats in the sales department, and there was an institutional seat among the seller seats, which sold 78.4525 million yuan.

On the 23rd, a number of wine stocks changed their previous upward trend and began to collectively "bungee jump". At the same time, with the rapid increase in trading volume, more than half of the wine stocks closed down on the day, and ST House even directly staged a "Tian Di Di" ".

Prior to this, a number of listed wine companies have focused on stock price risk. On the evening of the 23rd, more wine companies said that due to major changes in the market valuation of the liquor industry, the company terminated the investment to set up an industrial M&A fund. That night, Jinshiyuan (603369, Stock Bar) announced that on December 17, 2019, the board of directors decided to participate in the establishment of an industrial merger and acquisition fund with its own funds of 245 million yuan, which was specially used to acquire the shares of Shandong Jingzhi Wine Industry Co., Ltd. However, due to the impact of the macro environment, the industry competition situation and the operating situation of the target companies have changed. At the same time, the market valuation of the liquor industry has also undergone major changes. The partners unanimously decided not to set up the industry M&A fund for the time being, and the company terminated this investment.

In terms of the dynamics of leading wine companies, according to a report by Guizhou Daily on the 24th, in order to further strengthen the protection of intellectual property rights, we will focus on solving the outstanding problems of the Moutai (600519) wine market, such as stockpiling and driving up prices, and promoting the healthy development of the Moutai wine market. Recently, the State Administration for Market Regulation held the "National Moutai Distributor Representative Administrative Guidance Meeting" in Renhuai City, Guizhou Province, to urge and guide the national Moutai distributors to strictly abide by laws and regulations and operate in strict self-discipline.

According to the above report of Guizhou Daily, the meeting put forward four requirements for the price supervision of Moutai and other high-end liquor markets, especially during the New Year's Day and the Spring Festival: First, improve the political position and implement corporate social responsibility; The second is to operate with integrity and jointly protect the Moutai brand; the third is to optimize the allocation of resources in the Moutai market, and actively explore the establishment of a scientific, precise, normalized and operable new Moutai sales model; the fourth is to strengthen industry management, Promote social co-governance.

This is how the wine industry sees the organization

According to the research point of Zhongtai Securities, Kweichow Moutai is currently actively coordinating the sales work during the New Year's Day and Spring Festival peak seasons, and its performance in the first quarter is expected to achieve a good start. Looking forward to the "14th Five-Year Plan", Moutai Group strives to become the first Fortune Global 500 company in Guizhou Province. It is expected that the group revenue corresponding to achieving this goal will be more than 200 billion yuan, and the main business of liquor will be the core contributor. It is expected that the compound growth rate of the joint-stock company's revenue in the next five years will be about 12%. If the target is completed one year ahead of schedule, the corresponding revenue compound growth rate will be about 15%. Zhongtai Securities believes that Moutai, which is in the seller's market, has a clear development path to achieve the above goals. In addition to the sales contribution in the future, more needs to be achieved by increasing the average price.

Zhongtai Securities believes that after the stress test of the epidemic, the performance of high-end wine still maintains double-digit growth, reflecting the strong property of just-needed products; looking forward to the next five years, the core logic of consumption upgrading and brand concentration is expected to continue to strengthen, and high-end wine is expected to continue to strengthen. The market will still be in a stage where both volume and price will rise. Investors are advised to seize good investment opportunities in the medium and long term.

The research point of Essence Securities believes that in terms of main channel strategy, Moutai continues to promote direct sales, Wuliangye focuses on circle marketing and development of group buying, and Guojiao promotes the platform company model and strengthens terminals. The competition between the three is still dislocated. Essence Securities believes that there is still room for a synchronous upward trend in Guojiao's approval price, and the room for adjustment of factory prices is also relatively loose.