Some people say that in the zodiac, the most annoying thing is Rat, the most liked and respected is the cow. This statement is completely consistent with my opinion. This kind of love and hate does not come out of thin air, it is a conclusion drawn from the gradual understanding in life since childhood.

In another month, it will be the true lunar new year of Xin Chou, the Year of the Ox. Only with the air of the sky, the Taurus will raise its hooves high, and with endless auspiciousness, it will come to us. I have been thinking about it for a long time, and I want to write an essay about the year of the ox, but I haven't dared to write it, because if I want to explain it well, I am afraid I have to say a lot. method, extract one of the points and write about it for the readers.

As for the disgust and even hatred of the mouse, it was in my childhood, that is, in that difficult time, when the mouse was specifically against people, destroying people's lives, and even endangering people's lives. So it's not just me, I'm afraid everyone hates it to the core, so there's a result of the rat crossing the street and everyone shouting and beating.

Rats at that time were not only large, but also numerous and rampant. The production team gives each house a limited amount of food, and no matter where you put it, these guys will find it. They gnaw holes in your cabinets and boxes. Not only do they steal your food, they also poop and urinate inside when they are full.

You are looking forward to the New Year, looking forward to a new set of clothes, and you have pockets for snacks such as "lotus leaf" scallops, but when you wake up in the morning, you can't help laughing and laughing, mice not only eat took your snacks, and bit a few big holes out of your new clothes pocket. The most hated thing is that it is dirty, and it runs around, bringing fleas to the bed and clothes. 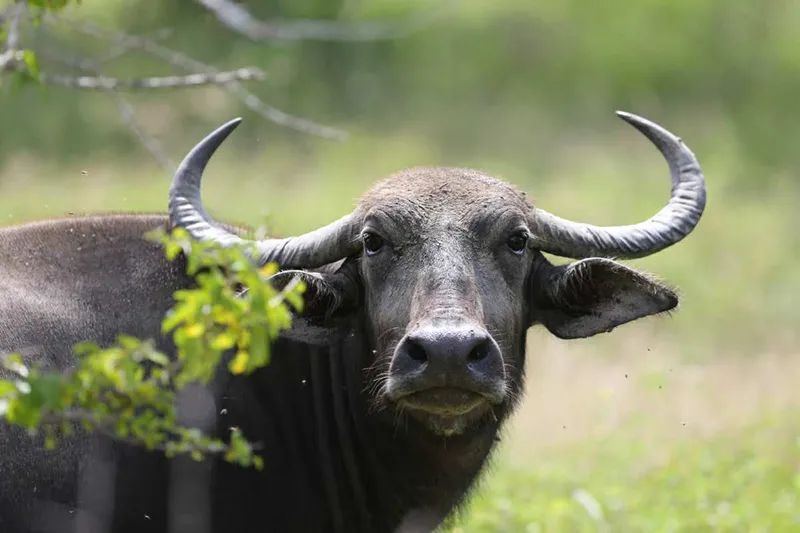 Oops, my body was allergic to flea venom , If you are bitten by a flea, a red blister will appear on the skin, and it will make it difficult for people to sleep all night. No way, my mother had to ask for insecticidal powder from the production team, called 666 powder, put it in a slightly thinner cloth bag, and then tap the medicine bag with a wooden stick to make the 666 powder seep out of the cloth bag, okay? Spread evenly over the bed.

666 is an insecticide and poison, the fleas are repelled, but what kind of poison people have suffered, how could they care about it at that time. In addition, rats also spread various viruses, which is a heinous crime! Therefore, my hatred of rats is no less than my hatred of Japanese invaders! hate it! I hate it! (Yo, I've gone too far, and digressed from the topic.)

As for the love of cows, when I was a child, I had a limited understanding of life, mainly from the story of the cowherd and the weaver girl told by my mother. He thinks that if the Cowherd does not have his faithful friend, the old buffalo, he will be a bachelor all his life, without a daughter-in-law and no children. Later, if he didn't have the old cow's skin, he couldn't go to heaven to meet his sweetheart, and his children couldn't see their mother. Ah, old cow, you are so kind!

At that time, I often had a dream that my mother brought me a buffalo. The buffalo was very friendly to me. I led it to eat fresh grass and drink clean water. Oh, when I grew up, it also brought me a beautiful fairy to be my daughter-in-law, and I was very happy. Later, I learned that when I was a child, I thought about it every day and dreamed at night. It was only later that I learned that myths and stories are based on beautiful ideals, and no real things will appear.

Of course, love for cattle is innate. Has a long history and tradition.

It is said that our country was as early as five or six thousand years ago , the buffalo was domesticated. In the era of Chinese farming culture, the emergence of metal ploughshares and the use of oxen have played a pivotal role in the rapid development of agriculture.

As we all know, until the implementation of the household production responsibility system in rural areas and the large collective production in the past, most of them relied on animal power. The government uses the legal system to protect it, who dares to kill at willWhoever kills the cattle will be punished by the law.

Up to now, there have been busy figures of cattle plowing fields and raking fields in the mountains and fields where there is no road for mechanized ploughing. Even with tractors ploughing the fields, tractors are affectionately called "iron bulls". From this simple and unpretentious title, we can see how deeply the common people have feelings for cattle.

Throughout the ages, people have expressed their love for cattle, their reverence for cattle, and their praise for cattle from "bull poems" and "bull poems". For example, Li Bai's "Song of the Stone Cow", Zhang Ji's "Shepherd Boy's Poem", Lu You's "Song of the Cow", Bai Yiju's "Official Niu", Wang Anshi's "Growing the Cow" and other poems all describe the cow from different angles. A farm animal with deep roots in the farming culture of the Chinese nation, a loyal friend and helper of human beings, the portrayal can be seen through the back of the paper, which makes people sigh.

Among them, it is particularly worth mentioning that Li Gang of the Song Dynasty said: "Thousands of acres of ploughs and thousands of boxes will be ploughed. No one will recover from exhaustion, but all living beings will be satisfied, and they will not win the disease and lie down in the sun." This poem makes the best summary of Niu's dedicated life, and gives the most sincere praise and sympathy to the old scalper, which can be called a masterpiece in Niu poetry!

Several masters in modern times have questioned the bull Poetry messages, which are cited as classic epigrams, play a very important role in literature and education, and I have to say it.

Master Hongyi Li Shutong sang affectionately in the poem "Farmer and Nurse": "When I was swaddled, I tasted the milk of old cows. When I was old, I ate rice and grain, and Lier worked hard. Why can't we bear to forget each other's suffering." It is believed that only farmers and wet nurses have the dedication of the old cattle. After eating its grain and drinking its milk, the world can be forgotten, the sweet wife can die, and the brocade and jade food can be forgotten, but their upbringing can be forgotten. The grace is unforgettable forever.

Mr. Lu Xun once described himself as a "cow" and wrote the immortal verse of "cross-eyed and cold to Ganfu's fingers, bowing his head and willing to be a rude ox", expressing his clear love and hatred, hatred for the enemy, and love for the working people. Love is on paper.

Guo Moruo, a writer of a generation, also said in his "Buffalo Praise": "The unicorn is nothing special, and the lion has no virtue, only the water buffalo, which symbolizes peaceful labor, can be called the country of our country. Beast!" Buffalo, the national beast! The worship of cattle is extremely praised!

In the New Year's Day speech in 2021, the general secretary called on the people of the whole country to be pioneers in the Year of the Ox, and called on all party members and cadres to be old scalpers, like Mr. Lu Xun, willing to serve the people. Ruzi cattle.

Friends, we will step into this symbol of good luck, perseverance, and the year of the ox with hard work and enterprising spirit. Set lofty ambitions, make great achievements and create brilliance. 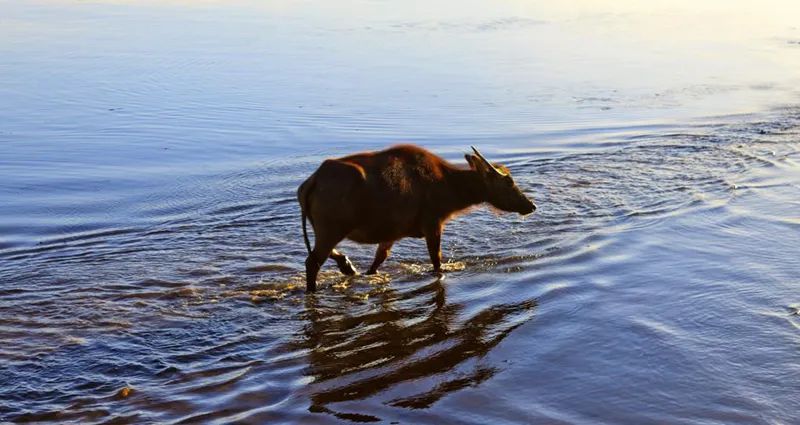 
I was born to the ground

I am not afraid of the power of tigers

Although I am a mount for Lao Tzu

For the food and clothing of human beings

Back to the blue sky

Head down to the yellow earth

Growing the turf on the street when hungry

The vicissitudes of life are chewed up

Every step is a solid footprint

Long with hard work and wind The rain

continuously cultivates the east and the west

in the scolding sound

the fame of Ruzi Niu

Even if the disease lies in the setting sun

only one skin is left

, it will be shaken by the earth

03. Five New Year couplets for the Year of the Ox ("Ox" couplets)

In the year of the Rat, the children play the flute and enjoy the spring in the countryside

Welcome the Year of the Ox, and the fertile fields are full of fragrance

Do not forget the original intention, plant mulberry and hit the scorpion willingly bow your head

Good Luck, Gao Shi holds the ear of the ox, the country is prosperous and safe

The fresh wind is thousands of miles, the farmer destroys the ploughshare, and the New Year Feng Life Insurance

Horizontal criticism: farewell to the old and welcome the new

The ermine is in the Geng Year, the heroic Wuhan classics Tests

With my cow essays, cow poems, cow couplets, welcome the Year of the Ox, may everyone be soaring to the sky

I wish you a tiger head, a tiger brain, a tiger soul, say goodbye to the year of the rat, hope Every one of them is a tiger.


The author of this article, Zhu Xing'an, authorizes Impression Huangpi to publish it

About the author Zhu Xing'an, retired teacher of Caidian Middle School in Huangpi District , five out of sixty. Because I don’t have Alzheimer’s disease, I often dance with words, write some new poems, write some articles, and submit articles to literary and art magazines in the district. In addition to self-appreciation, I also want to please others. In recent years, he has written some series about the local customs of Caidian, such as "Caidian's Rice Wine", "Caidian's Meat Cake", "Caidian's Ciba" and so on.