Release Time:2022-06-04 Topic:stock bull market picture Reading：74 Navigation：Stock Liao information > Culture > Calendar for the Year of the Ox, I don't love the famous masterpieces of the past dynasties, but I love the cows he painted, because the eyes of the cows he painted are affectionate _ Pictur phone-reading

When the Year of the Ox came, he found the friend who had sent the WeChat account and asked for help to find the painter who painted the cow, and he wanted to bring these cow paintings to the calendar. 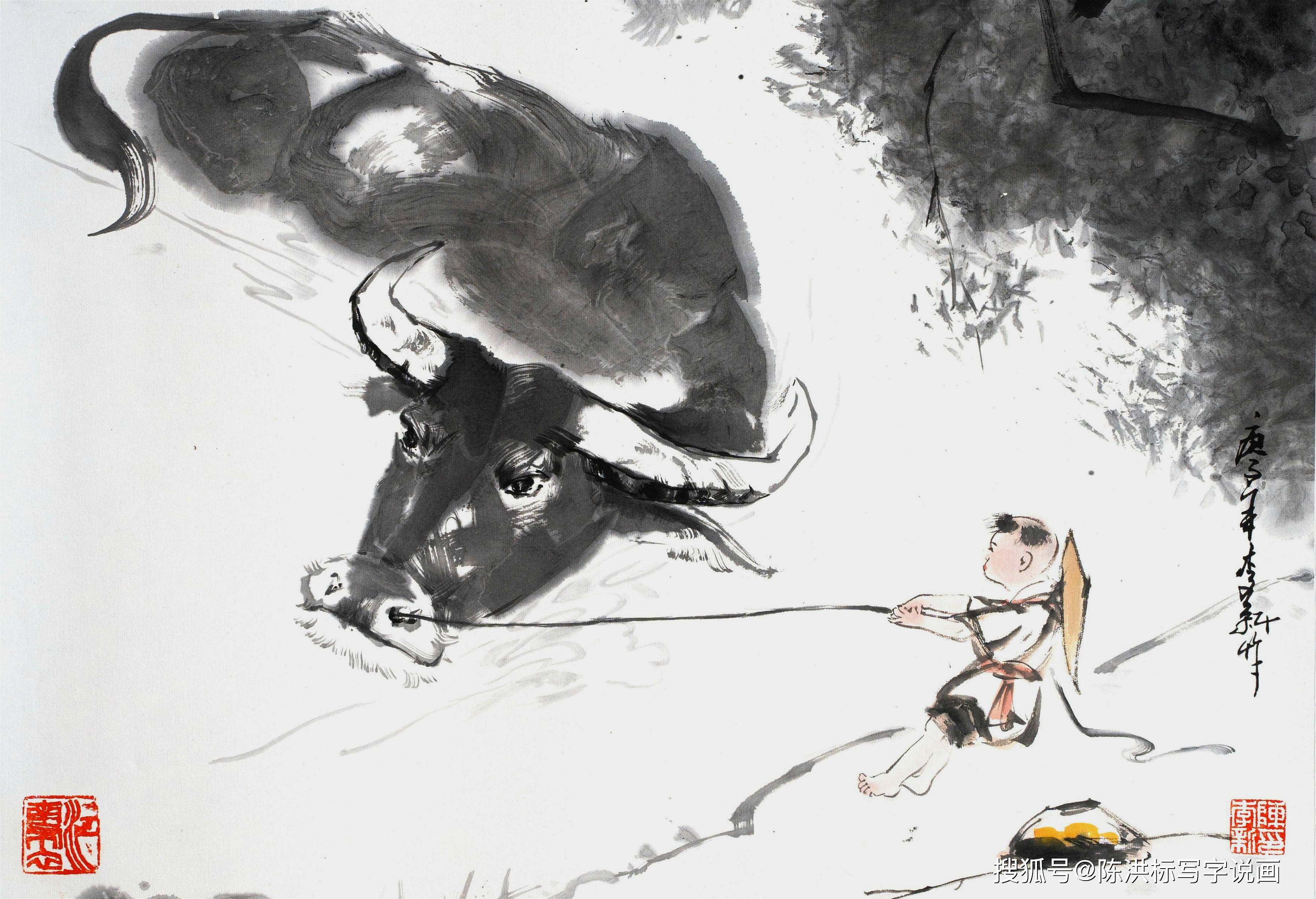 Some gift companies also came to him and wanted to print the cow he painted on gifts, not only to cater to cows Year of the year, but also can improve the grade of gifts. 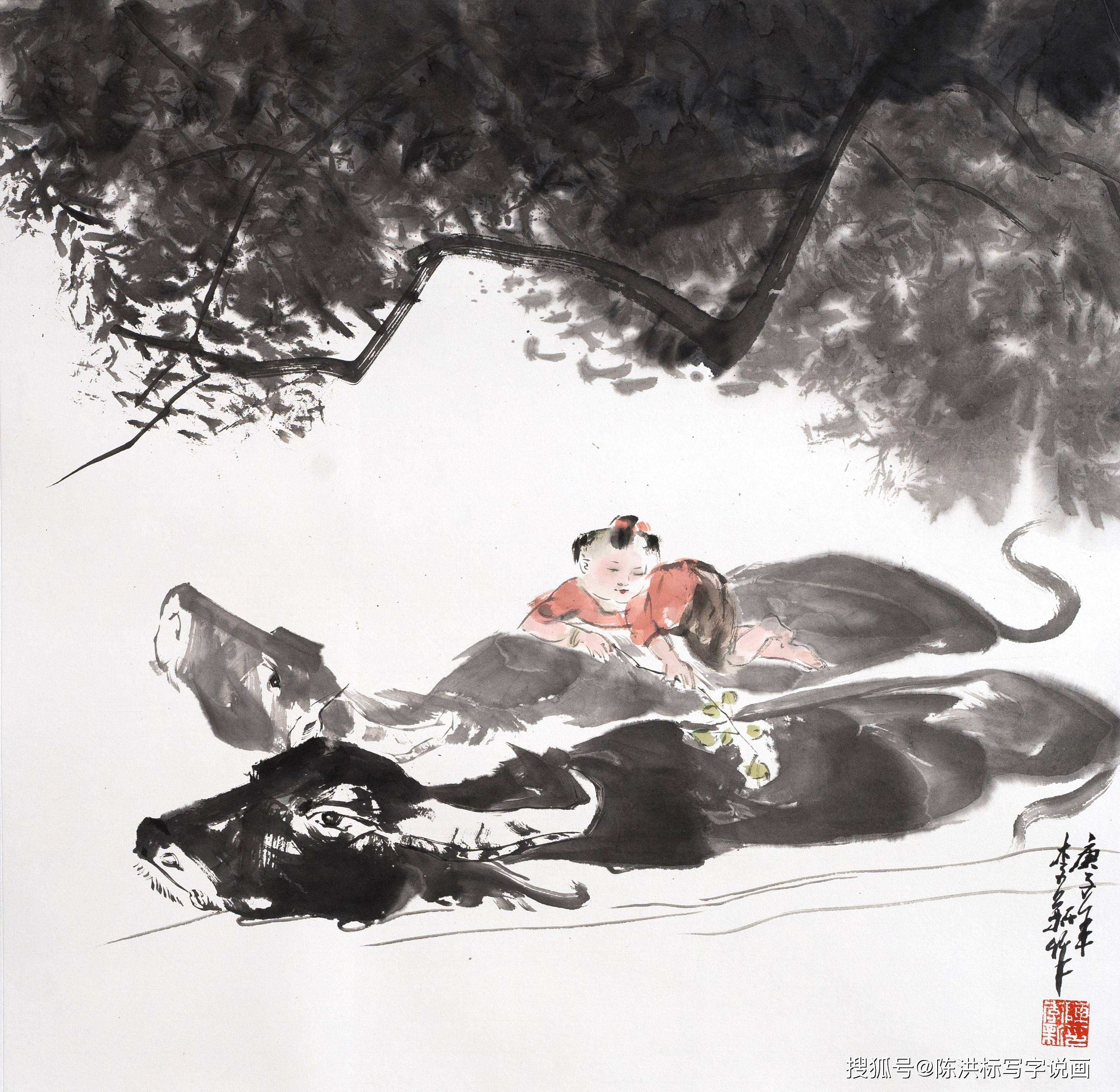 This makes him a little strange. There are painters who have painted cows in all dynasties, and there are many famous masterpieces. , and there is no copyright issue, why bother?

2. Why don't you love the famous works of the past dynasties and prefer the cows he painted?

And there are not one or two people who have such needs. Why don't you love the famous masterpieces of the past dynasties and prefer the cows he painted?

Chen Lixin was surprised by the answer.

The reason is very simple, just look at the ox that you draw is lovable and arrogant, which is very suitable for the new atmosphere of the year of the ox. 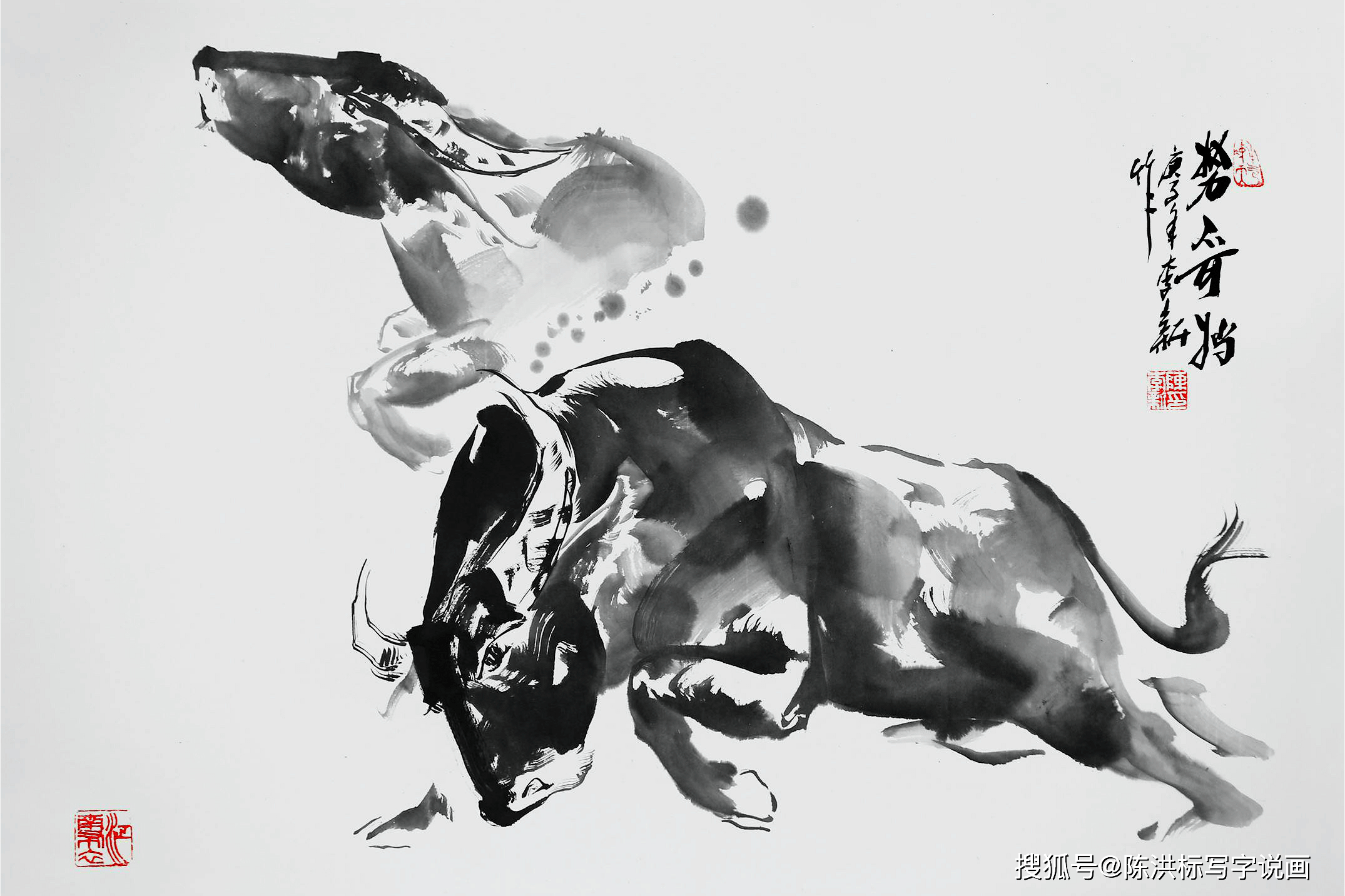 This kind of implication and folk appeal should be very common. Could it be that the cows painted by famous masters of all dynasties have no such meaning?

It stands to reason that the calligraphy and painting that can be passed down to this day must be treasures of masterpieces after the great waves of the long river.

3. Famous painters of past dynasties have painted cows, but can't find a bullish one?

I actually did some research on this, what was the result?

One of the top ten famous paintings in China, Han Huang's "Five Bulls" in the Tang Dynasty (see the picture below). On the yellowed picture, the five cows are lined up from left to right, one is grazing with their heads bowed, the other is leaning forward, the other is looking back and licking their tongues, the other is walking slowly, and the other is rubbing against the thorns. Every cow is plump and strong, but it lacks some vigor, let alone arrogance. 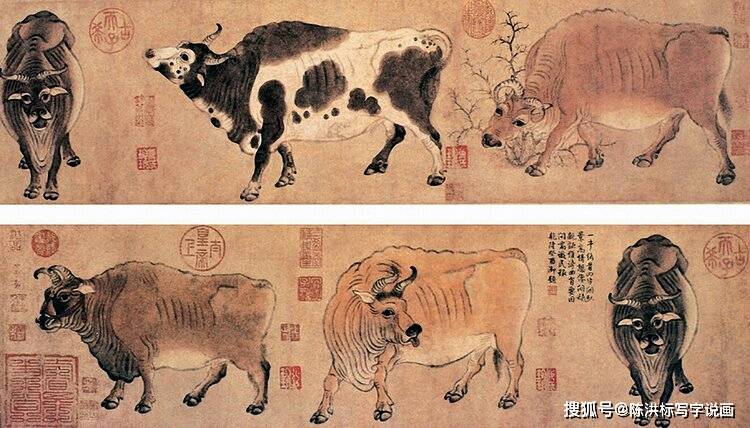 Dai Song's "Bull Fighting Picture" (see the picture below) in the Tang Dynasty is also a masterpiece of bull painting handed down from generation to generation. It is very expressive and arrogant, but the wildness and stubbornness are also on the paper, and it is still not suitable for use as a desk calendar. 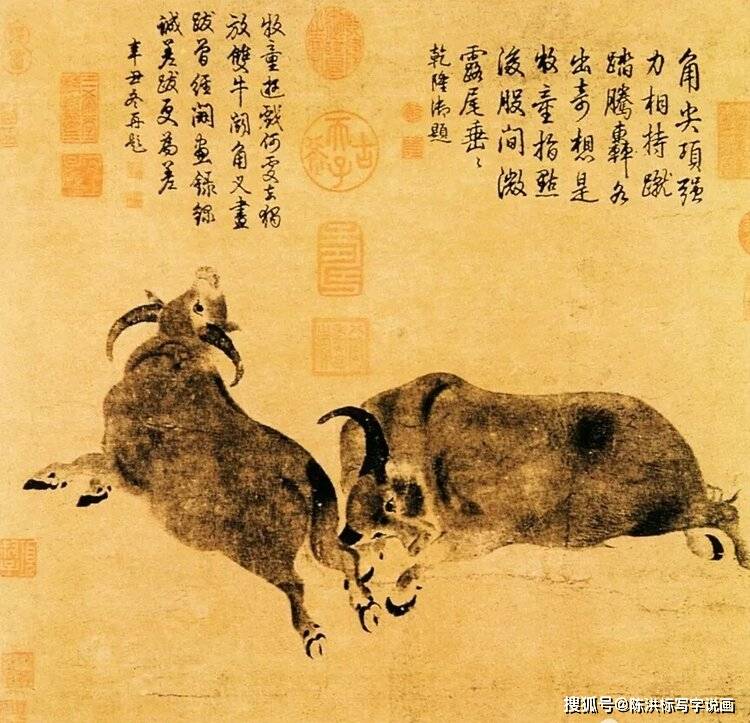 The "Hundred Bulls" by Li Tang in the Southern Song Dynasty (see the picture below) is more like a group of large and small cattle walking together, In the relaxed moment of grazing and grazing, the whole picture has a leisurely taste. 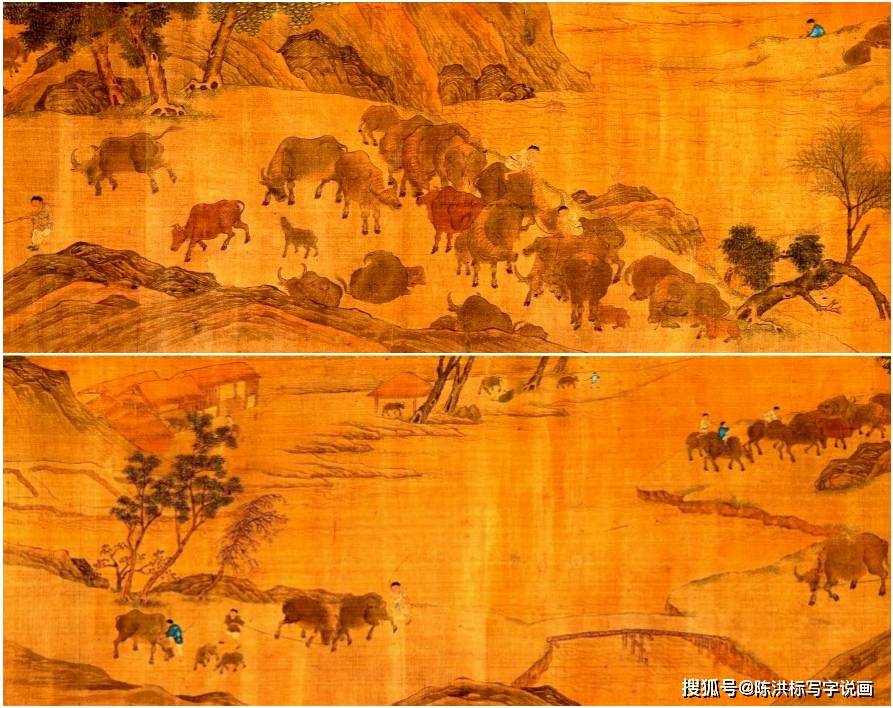 In the Southern Song Dynasty Li Di's "Wind and Rain Shepherds Returning" (see the picture below), two shepherd boys ride on a big buffalo, each Driving the cows home against the wind in the rain, although the picture is interesting, but in reality, how can buffaloes be afraid of the rain? 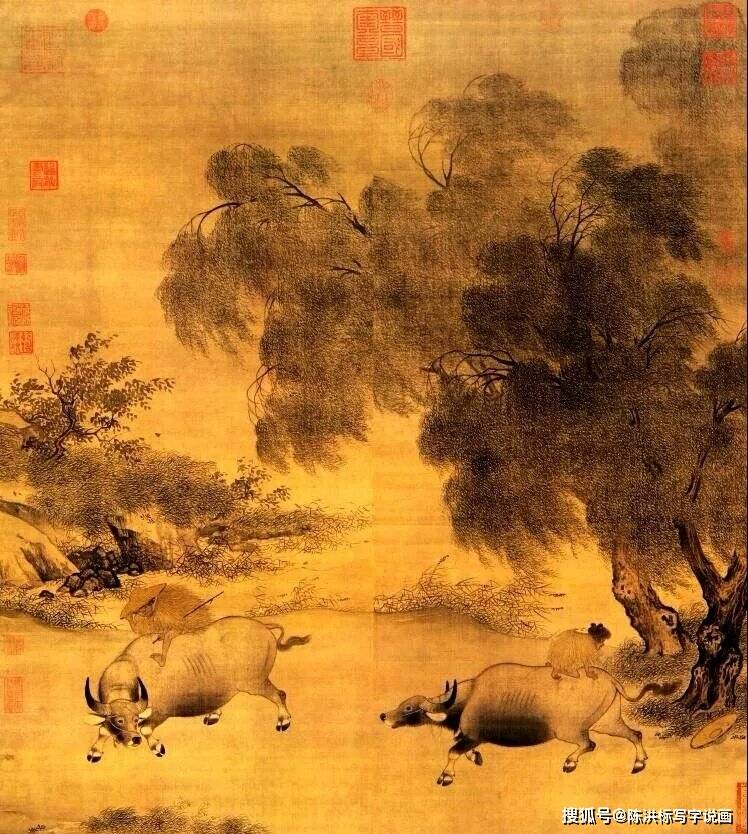 The appearance of the two cows on the screen is really not flattering. Of course not on the calendar.

Ming Dynasty Zhang Lu's "Lao Tzu Riding a Bull" (see the picture below), Lao Tzu sits on the back of the ox, holds the "Tao Te Ching" scroll, and is looking up at a flying bat. 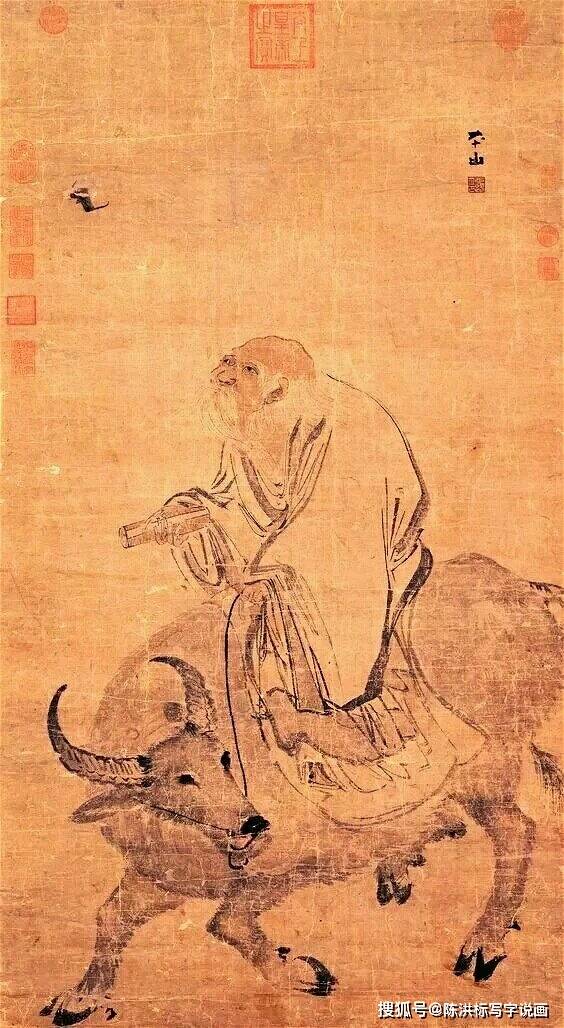 This is the same as Yang Jin's "Riding a Bull in Stone Valley" (see the picture below) in the Qing Dynasty, riding on the back of a bull , roaming the country trails, walking slowly.

This is all the style of literati and poets, and the cow gate riding under it either looks like a sheep's head, or a bitter melon face.

Qing Dynasty Shitao's "Playing the Qin to the Ox" (see the picture below) is full of desolation and loneliness, which is not suitable for the Year of the Ox. meteorological.

The famous modern artist, Qi Baishi's bull (see the next two pictures), is notI love to draw a cow's head, either by drawing a cow's butt, or by drawing the cow into the shape of a pig, which looks the same from a distance. 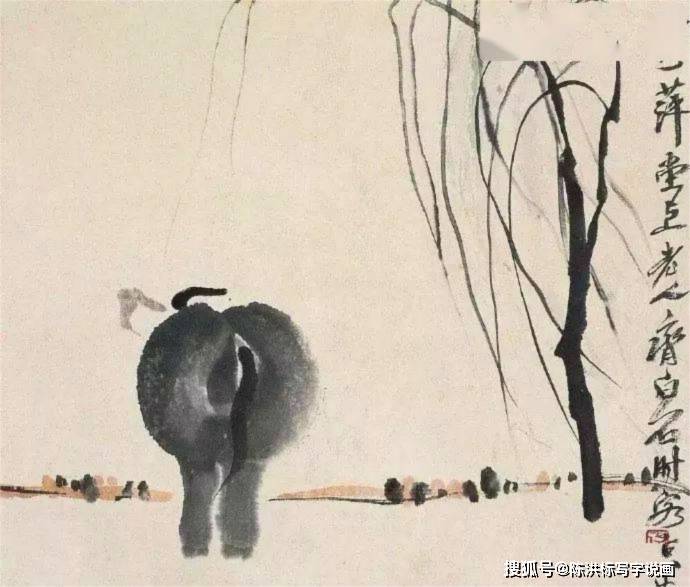 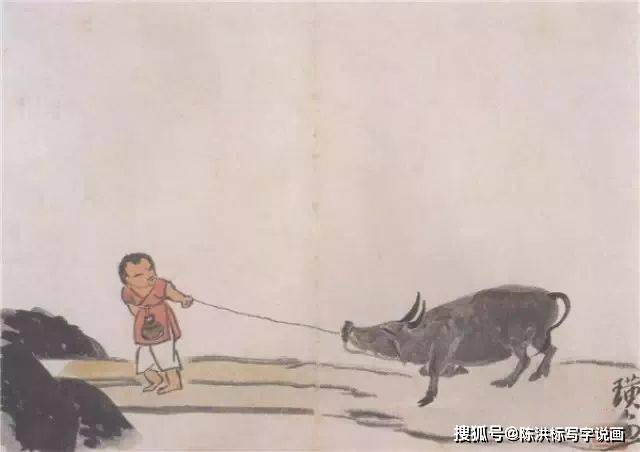 Xu Beihong’s Cow (see below Picture), the nostrils are like the nostrils of a horse, large and upward, and the bull's eye is also a little scary. 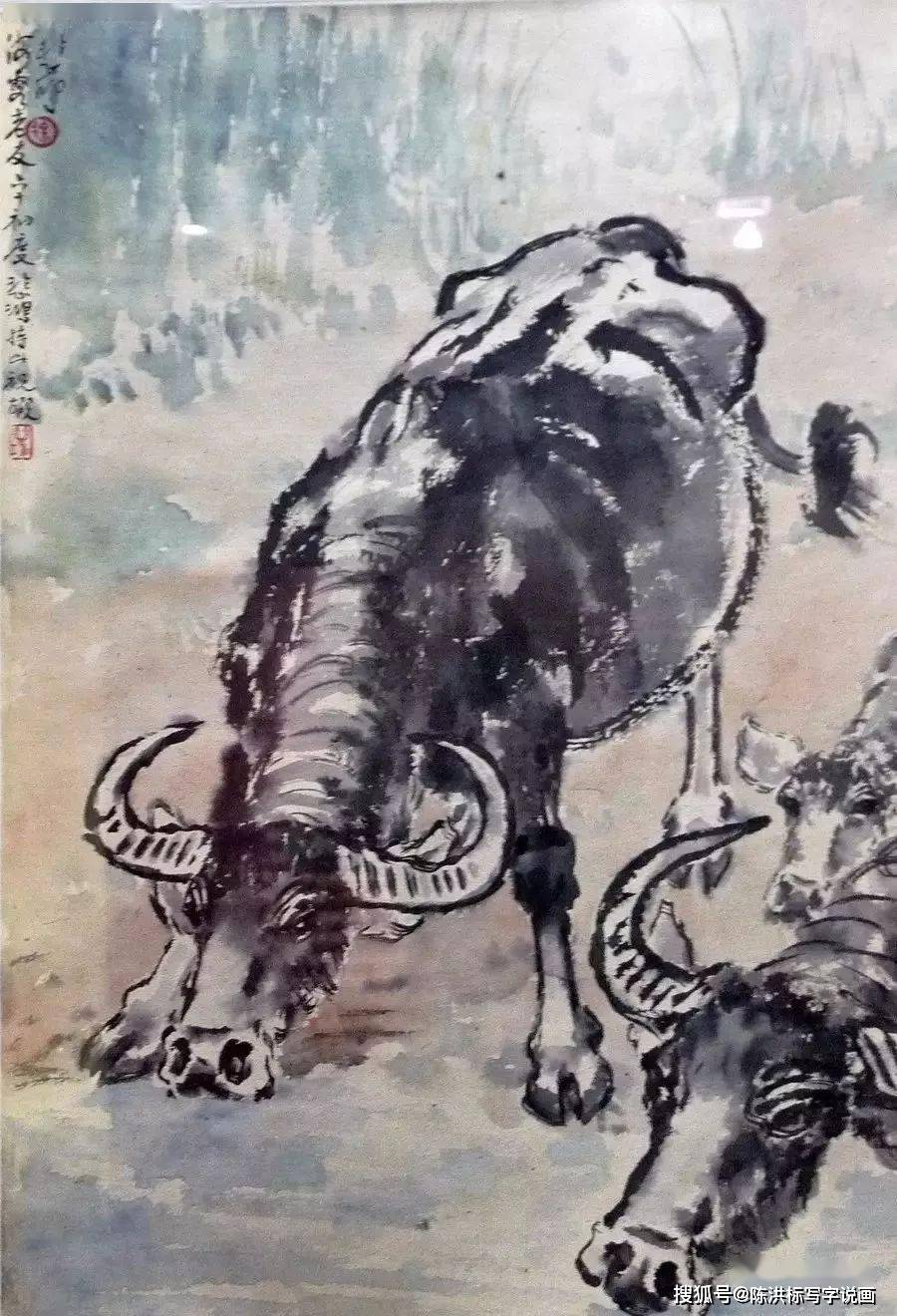 Li Keran's cow (see the next two pictures) looks like both a yak and an elephant, with its eyes always closed Yes, are you angry, or are you too lazy to open it? In short, why did the good big buffalo grow into a new breed under his pen. 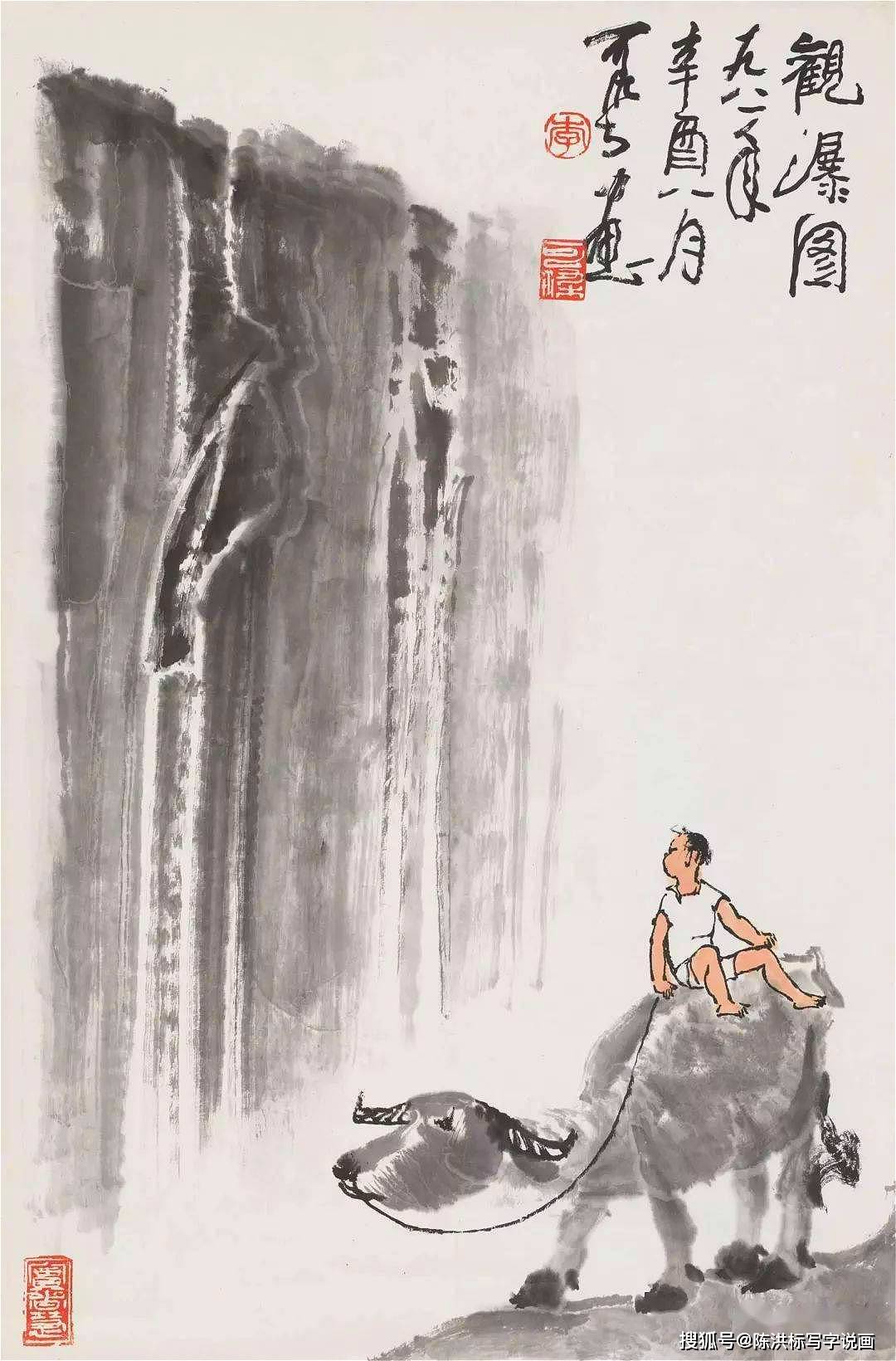 Pan Tianshou's buffalo (see the picture below), soaked in water, is the closest to the real buffalo It is also the most vivid, and among the painters of all dynasties, the most down-to-earth cow.

Unfortunately, there is a person drawn in the pupil of the bull's eye. A little bit of cow spirit. 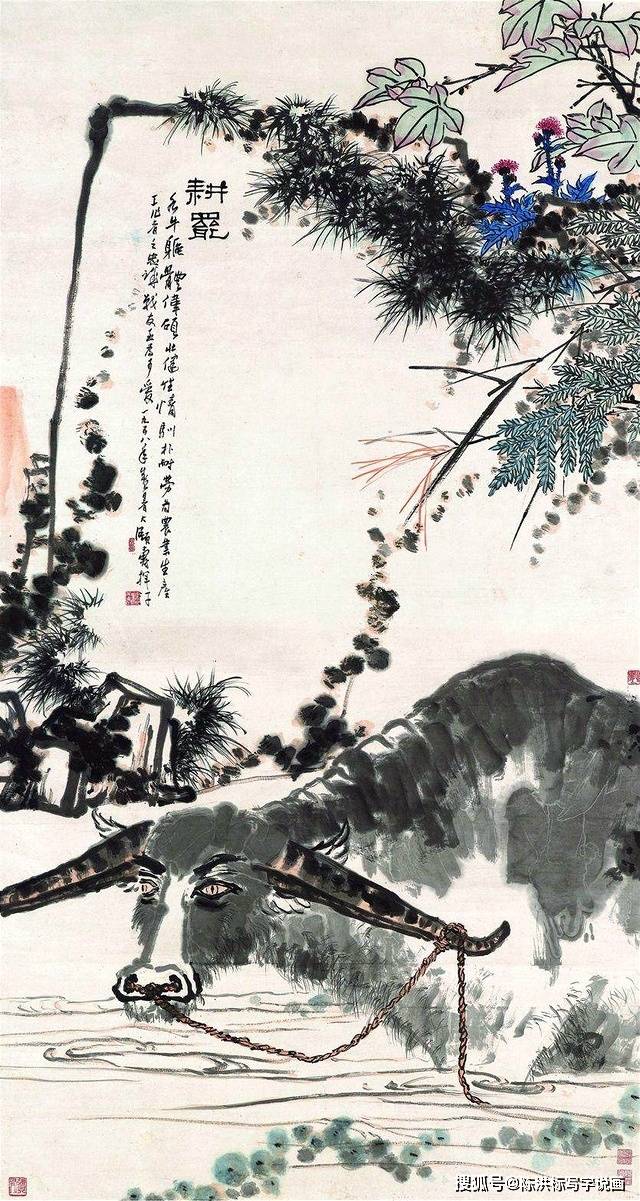 In 1976, he painted more than 100 buffalo paintings, "all of which could not be made into paintings. There are many reasons, mainly due to lack of life and little contact with buffaloes." 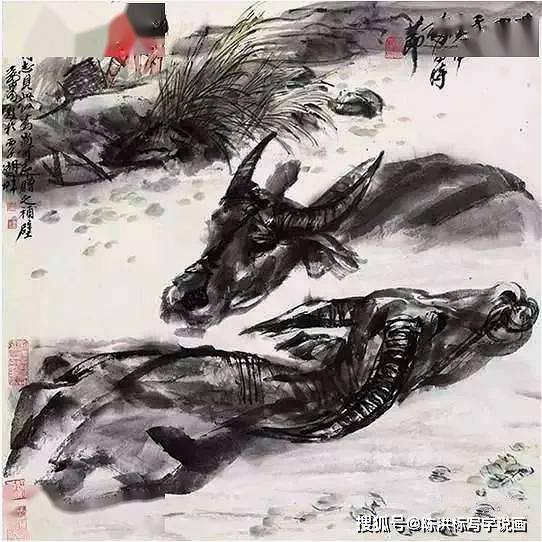 This is what he wrote in a paragraph. Later, he had the opportunity to live in Suzhou, Hangzhou and southern Anhui. 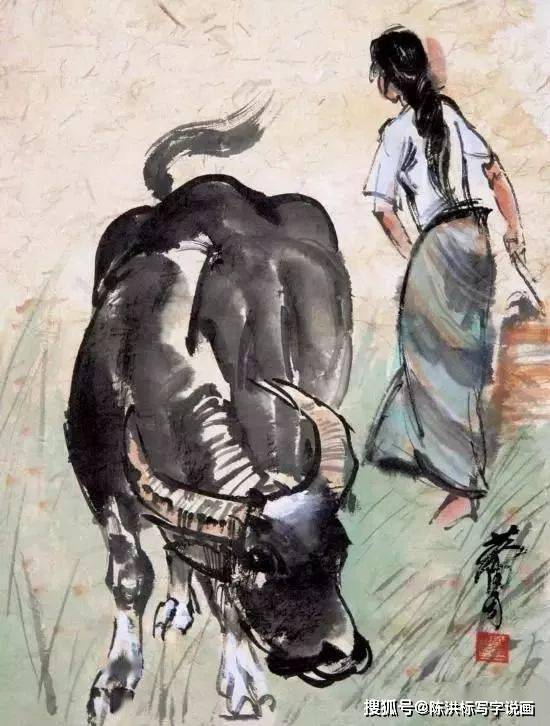 His cows are very good, but they are too abstract. What he draws is a kind of symbol, not a cow with flesh and blood, and it is not a cow that people see in the eyes. It is an art cow, an arts and crafts cow. 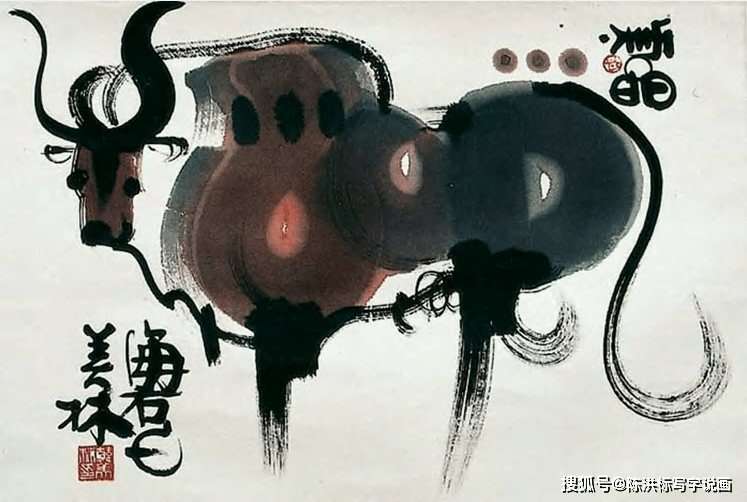 The artistic value of such a cow must be very high, and there must be many people who like it, so it is made into stamps and made into I bought portrait crafts, but I am embarrassed to use it as a desk calendar and a wall calendar.

Because you read it, you will feel that this is not a cow, and you will doubt your own aesthetics. 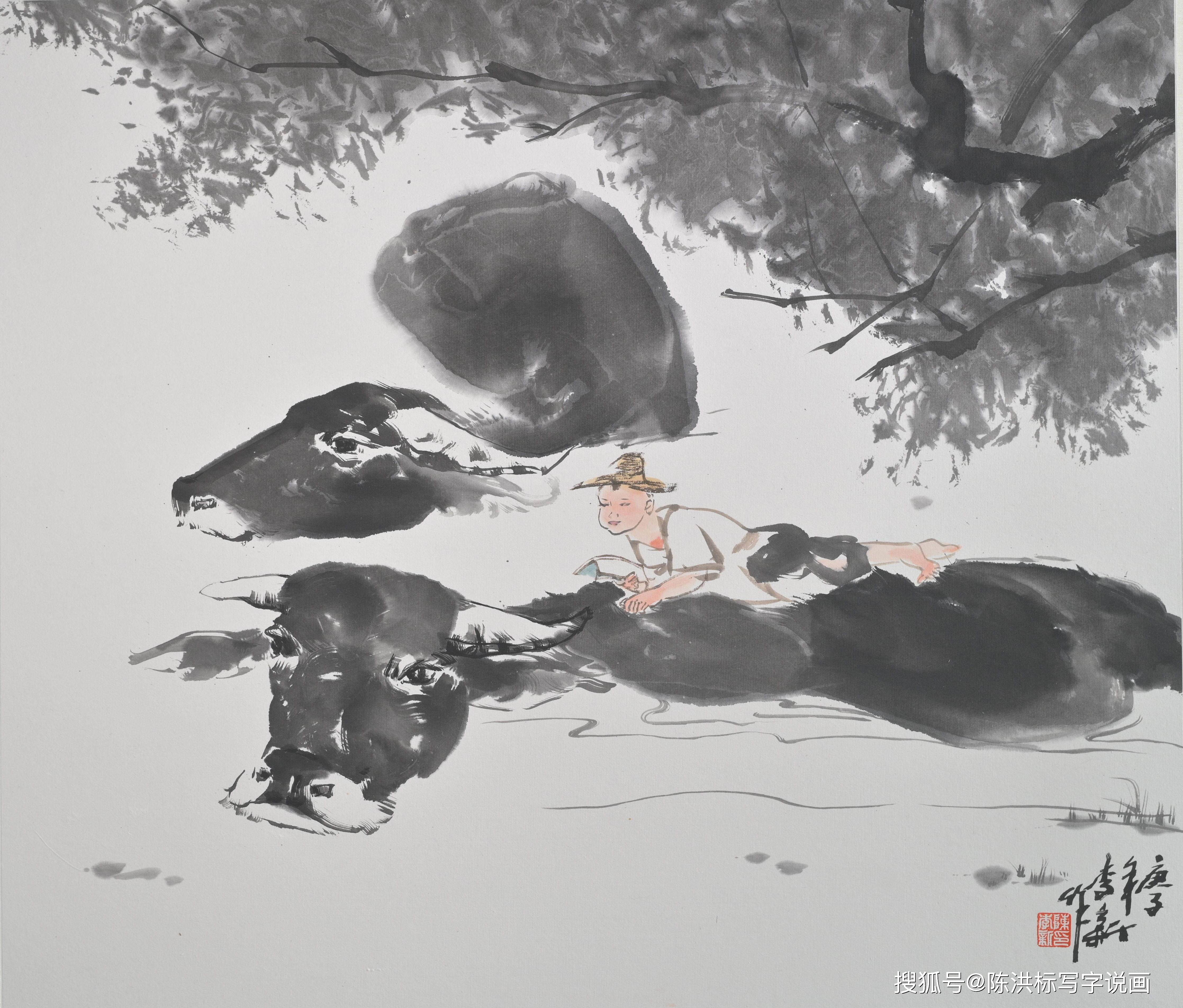 Therefore, looking at the cows painted by famous artists of all dynasties, it is really as these companies say, although the famous masterpieces of all dynasties are good, But it is not suitable to be used as a desk calendar for the Year of the Ox.

Because it's either too ancient or modern, or the shape is not down to earth, and it doesn't have the taste of bullshit, there is nothing that can be used as a desk calendar.

4. After 35 years of painting cows in the countryside, the cows in the paintings are down-to-earth

On the other hand, the cows painted by Chen Lixin are the cows in the fields and those in the ponds. An ox is an ox that plows the land.

Chen Lixin, who was born in a scholarly family in Yongkang, Zhejiang Province, has been fond of cattle since he was a child, and can be good friends with cattle. Some people say that he came to this world just to paint cows. 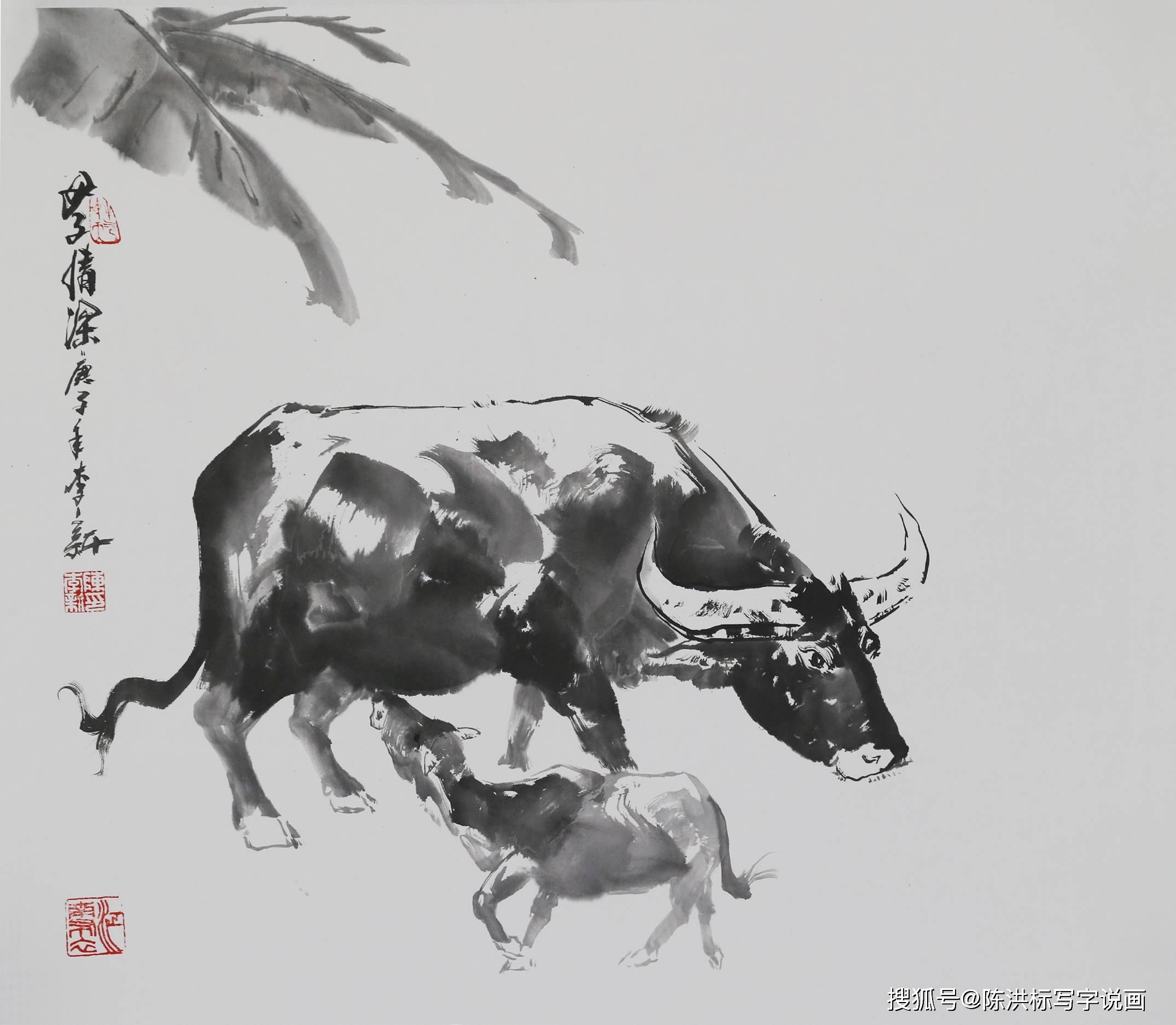 I'm just starting out and I still don't believe it. After I have known him for a long time, especially in the past few years, the cows he painted have more and more rural flavors, especially the deep affection in the eyes of the cows, and I gradually began to believe them. 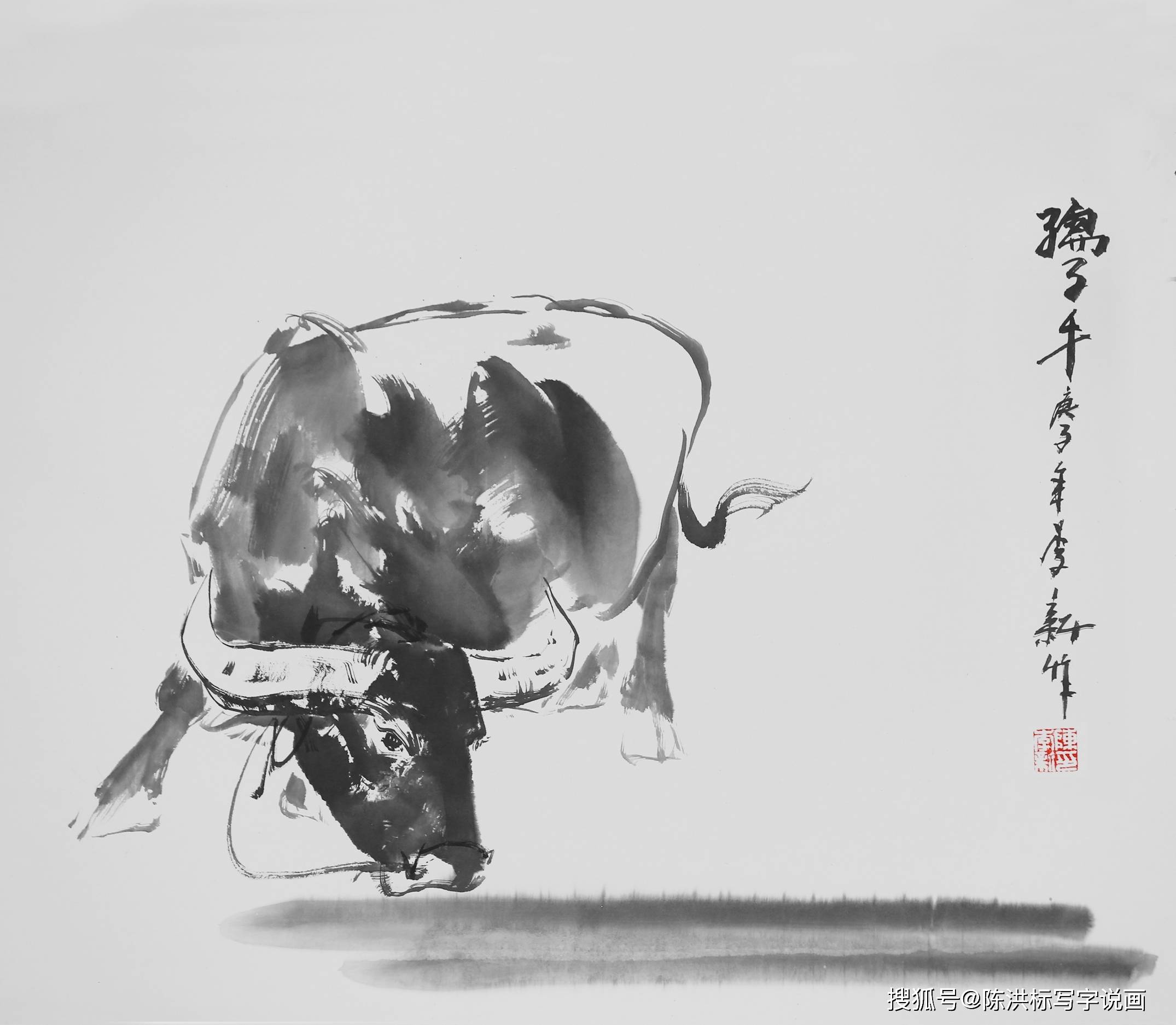 He is too familiar with real cows, they are always chewing and never eating. Satiety, which is said to be their rumination function.

I'm chewing in my mouth, and shit will come out from the back of my butt at any time. Isn't this a bit embarrassing, and people in the city will definitely scream when they see it.

You can smell cow shit and stench from afar, and it's always surrounded by a herd of gadflies. 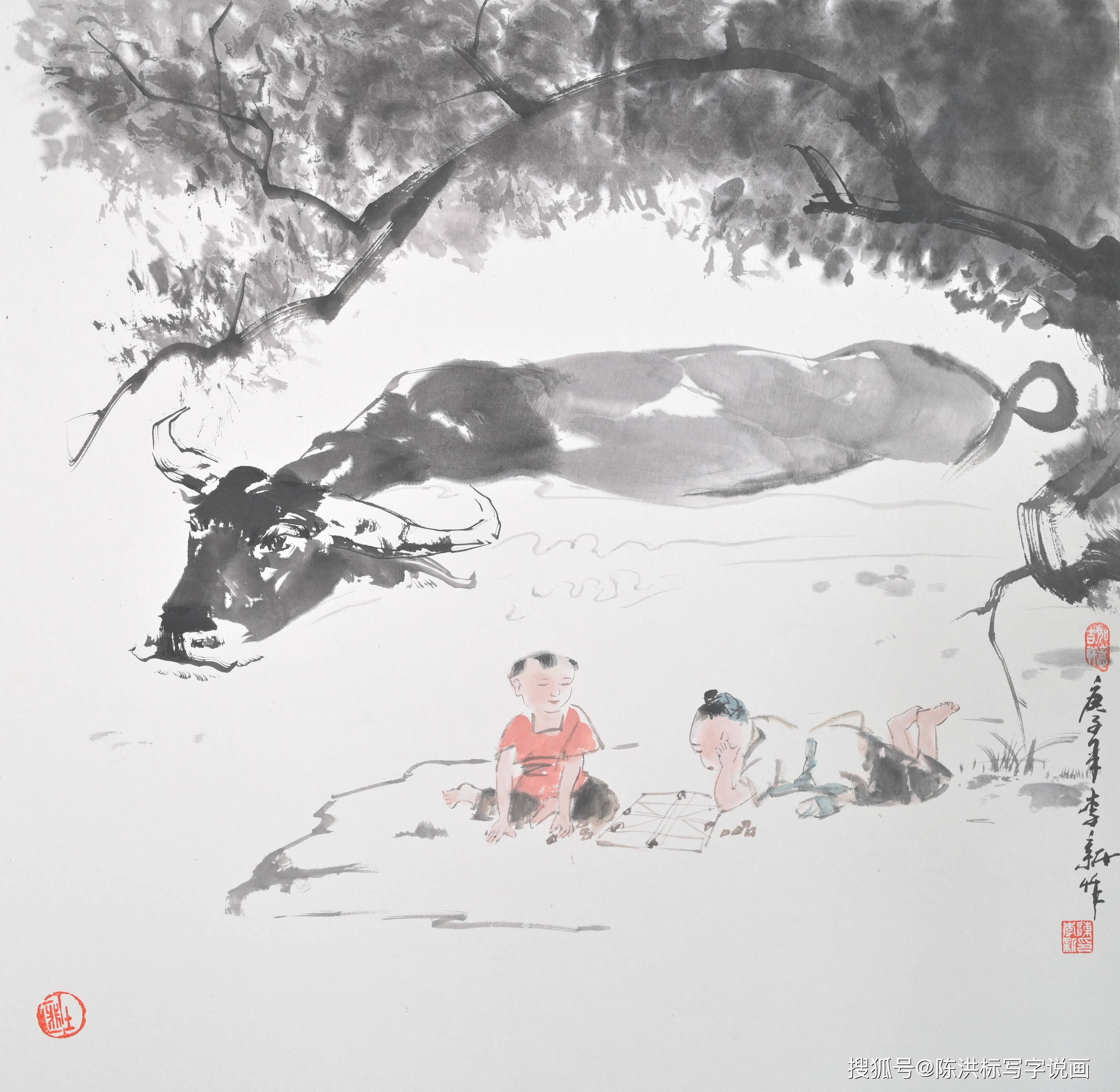 If you get too close, it will bite you without knowing it. That hurts, sometimes it's a gadfly, Sometimes you think it's a gadfly, but it's actually another kind of small and black bug. When it is bitten, it will bulge out a small bag, and it will be unbearably itchy, and it will form a group with the gadfly.

You are too far away to see the cow's demeanor.

Chen Lixin doesn't like to sit at home and paintInstead of drawing the cow in the elephant, I want to draw the cow in reality, so he can get as close as he can. 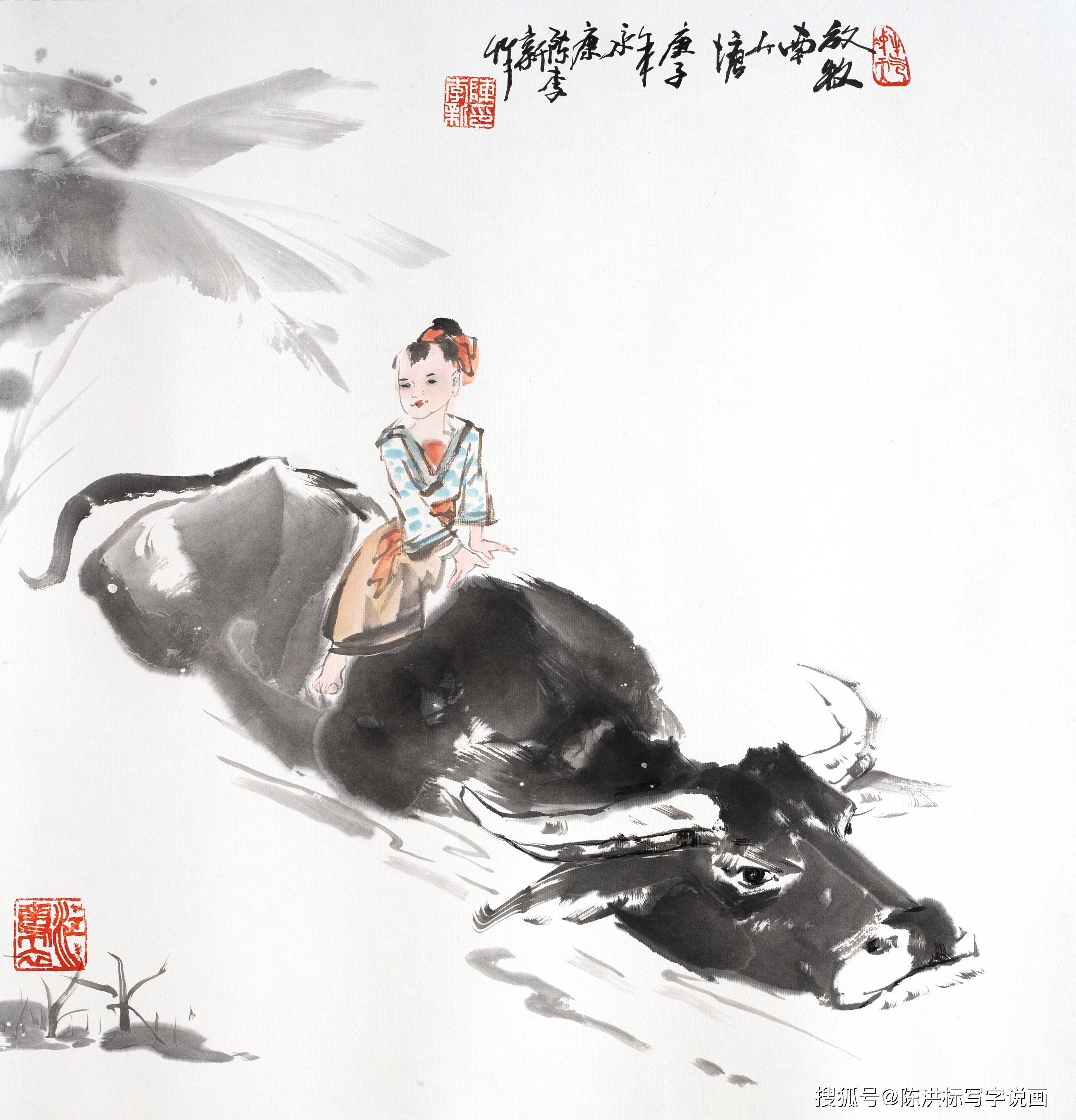 5. His bull's eye is affectionate and likable

Therefore, when you see the cow written by Chen Lixin, you don't say that the ink is divided into five colors, the white space is just right, and it is not that the composition is exquisite and the shape and spirit are complete. Just look at the cow's eyes, the eyes are full of affection. 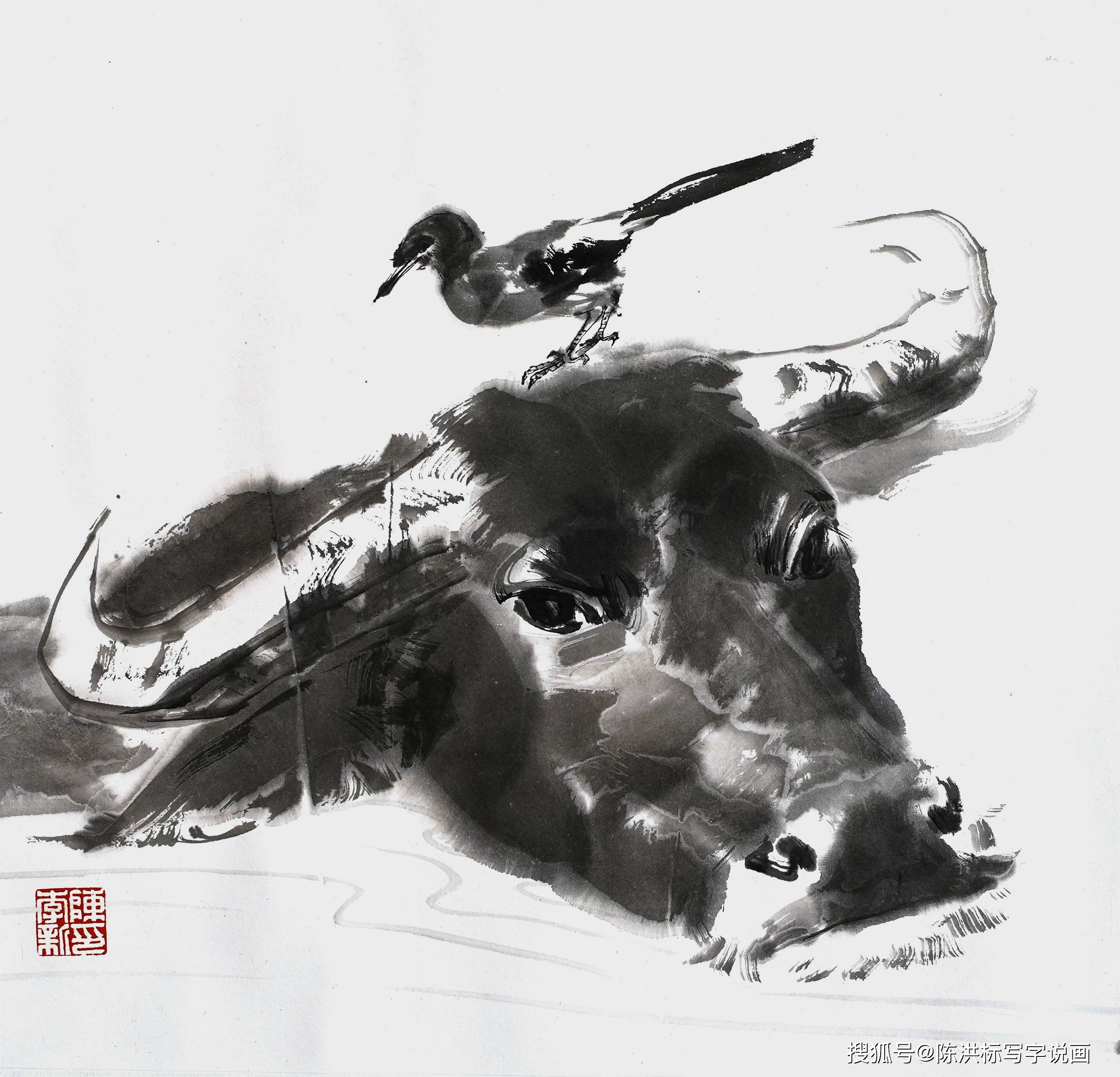 As Ai Qing said in the poem "I Love This Land": Why are there tears in my eyes? Because I love this land deeply...

There is no one who can draw such a look in the eyes of famous masters of all dynasties, nor can he draw the deep affection of a cow, only Chen Lixin can.

This is the fundamental reason why these companies do not love masterpieces by famous artists of all dynasties, but love the cows painted by Chen Lixin.

This article is originally written by Chen Hongbiao, a member of the Chinese Writers Association, a biographer, and a critic of calligraphy and painting. The pictures are from the Internet. Unless otherwise stated, they are all paintings by artist Chen Lixin.

1 Stock bull picture cartoon (stock bull picture mobile wallpaper)
2 Our Spring Festival | Shizhen China, to express one year of thanks for you! _ Brown sugar
3 "Ox" couplet in the year of the ox _ couplet
4 2022 Spring Festival couplets Daquan (not tacky Spring Festival couplets)
5 Nine-character couplet of the Year of the Tiger
6 China in Symbols: From Beast Totem to Auspicious Symbols
7 Calendar for the Year of the Ox, I don't love the famous masterpieces of the past dynasties, but I love the cows he painted, because the eyes of the cows he painted are affectionate _ Pictur
8 New Year's energy looks better|31 wallpapers, come and find your company!
9 Stock bull picture mobile wallpaper (stock bull picture cartoon)
10 Weekly Highlights Review: List of National Cultural Industry Demonstration Parks Announced; Three Major Operators Will Be Delisted From U.S. Stocks