Shenwan Hongyuan's semi-annual forecast for 2021 has come out, and it has fallen so much. This thunder is not small.

Release Time:2022-05-14 Topic:Shenwan Hongyuan Securities Ranking Reading：6 Navigation：Stock Liao information > Finance > non-banking financial industry > Shenwan Hongyuan's semi-annual forecast for 2021 has come out, and it has fallen so much. This thunder is not small. phone-reading A total of 125 of the 139 securities companies made profits in the first half of the year.

On the whole, 139 securities companies realized a total net profit of 90.279 billion yuan, of which 125 realized profits.

CITIC Securities pointed out that the reason for the company's performance growth is closely related to the high prosperity of the capital market: in the first half of 2021, the domestic capital market will develop vigorously and market transactions will be active; Various businesses developed in a balanced manner, and operating results continued to maintain steady growth. However, the company did not disclose specific financial data for its major business lines.

Of course, there are also some aggressive pursuers in the top 20, such as: Internet brokerage - Oriental Fortune. In the first half of this year, the operating income of Orient Fortune reached 3.114 billion yuan, an increase of 66.39% compared with 1.871 billion yuan in the same period last year.

Oriental Fortune said that the company's revenue in the first half of this year increased significantly because the stock trading volume of the securities business and the scale of margin financing and securities lending business increased significantly year-on-year. As of the end of June, the Orient Fortune securities business had achieved revenue of 3.223 billion yuan, a year-on-year increase of 55.73%, accounting for about 55.76% of the total revenue.

Top 20 in terms of net profit , which is not consistent with the revenue ranking. According to the data of the Securities Industry Association, in the first half of the year, 139 securities companies realized a total net profit of 90.279 billion yuan, 125 securities companies realized profits, and 14 were in a state of loss. Guofu, etc., turned from a profit in the same period last year to a loss in the first half of this year.

In the net profit list, it can be seen that the fastest growing net profit is still Oriental Fortune, an Internet brokerage like A dark horse, it can be expected that it will enter the second echelon of securities companies in the next few years.

It is worth noting that there is a company that is not on the revenue list, but ranks 19th on the net profit list, and that is CICC Fortune. In the first half of this year, CICC Wealth achieved a net profit of 1.329 billion yuan, an increase of 41.96% from 936 million yuan in the same period last year.

After the division of parent and subsidiary businesses is clear, it will help the company to unify scheduling and accelerate the transformation of wealth management. The development of CICC Wealth may be accelerated.

Several companies are happy and some are sad. Among the top 20 securities companies in terms of net profit, four companies including China Securities Construction Investment, Shenwan Hongyuan, Everbright Securities, and CICC posted net profits. The decline was -8.24%, -21.14%, -15.56% and -24.78% respectively.

Among them, CICC declined the most and became the only company on the list that increased revenue without increasing profits. This may be related to the company's gradual division of business into subsidiaries in recent years. Gold wealth has a certain relationship. And China Securities, Shenwan Hongyuan and Everbright Securities are all in a state of declining revenue and net profit.

In terms of transformation, in the face of the continuous decline in the net commission rate of the brokerage business and the continuous decline in performance contribution, the stock competition of securities companies is prominent. In order to create more profit space and promote the improvement of ROE, the transformation of wealth management in the securities industry has accelerated in recent years.

In 2020, the revenue from the agency sales of financial products by many securities companies has grown rapidly, and the qualification of fund investment advisors, which is an important starting point for the transformation of securities companies' wealth management, has also been greatly increased. According to the data of the China Securities Association, in 2020, the whole industry achieved a net income of 13.438 billion yuan from agency sales of financial products, a year-on-year increase of 148.76%, achieving leapfrog growth. Combining a number of wealth management transformation business data, the China Securities Association believes that the wealth management transformation has achieved initial results.

In the first half of this year, what achievements have the securities companies made in the transformation?

The sales volume of financial products is one of the key indicators of wealth management transformation. We can see the transformation results of securities companies in the first half of the year from this indicator. 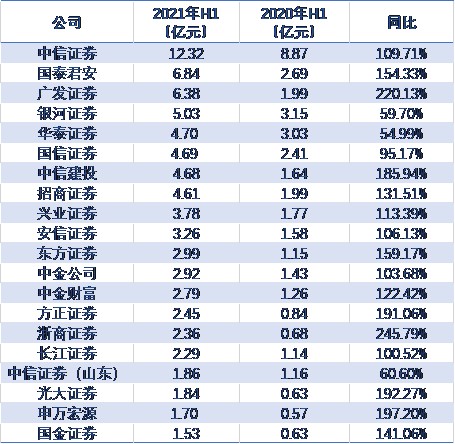 Except header couponsOutside of business, small and medium-sized securities companies are also following the "trend" to accelerate their transformation. It can be seen that the sales growth rate of Zheshang Securities' financial products is 245.79%, the highest growth rate.

It can be seen from the interim report card of this brokerage that the leading brokerages are relatively good in terms of performance and transformation. Despite the suppression by giants, there are still many brokerages such as Dark horses generally break out of the siege. I don’t know whether the industry rankings will be reshuffled again by the end of this year, and the “Daily Financial Report” will continue to pay attention.