Three-month "magic trip" after returning to China, a Chinese lawyer said that he was fraudulent in air tickets and set up a fund to help Chinese people defend their rights

Release Time:2022-05-05 Topic:Buying a fund and being deceived by 500,000 Reading：10 Navigation：Stock Liao information > Society > Three-month "magic trip" after returning to China, a Chinese lawyer said that he was fraudulent in air tickets and set up a fund to help Chinese people defend their rights phone-reading

Recently, an article on the WeChat public account "My Three-Month "Magic Journey" in China" has caused heated discussions on the Internet, and has been read by about 5 million. The article tells the story of a Chinese in the United States who returned The quarantine experience of visiting relatives in China. The author of the article, Xue Liangquan, a Chinese lawyer in Los Angeles, said that he had encountered air ticket fraud and was going to file a lawsuit in China.

1. I purchased a ticket through WeChat, but failed to issue a ticket for three months

Xue Liangquan said that in September last year, he arranged for an assistant to book a return ticket, and the assistant found a company A ticket agent named "XX" paid a fee of RMB 19,140 through WeChat and ordered a flight from Los Angeles to Guangzhou on January 2 this year. But until the night of January 1, under the repeated urging of Xue Liangquan, the ticketing agent did not issue a ticket or itinerary. Finally, the ticket agent informed via WeChat that there were no more tickets, and the tickets could not be issued.

Xue Liangquan mentioned that he has completed the new crown test, got a negative report, everything is ready, only the air ticket is owed. "I really didn't expect that I paid nearly 20,000 yuan to book a ticket three months in advance, and three months later the other party told me that there was no ticket. This feeling of being cheated is very angry, before my flight took off. After 12 hours, my itinerary and air ticket haven't come out yet, so I was very, very anxious."

Xue Liangquan said that on the evening of January 1, the "XX" ticket agent asked him to find another place by himself. buy tickets through the channels, and verbally promised to reimburse them for the cost of buying tickets on the phone. "The other party was very cunning and didn't want to write a written promise. At that time, I knew there must be a problem." After that, he spent another 29,500 yuan to buy a new ticket for the same flight through another ticket company, and finally boarded the plane smoothly. The two air tickets cost him nearly 50,000 yuan.

The receipt sent by the ticketing agency via WeChat has not been issued after three months.

Xue Liangquan said that the other party verbally promised to reimburse him for the cost of purchasing the air ticket, but was unwilling to write a written promise.

Second, the ticketing company only refunded the cost of the original ticket and did not make up the difference

However, Xue Liangquan said that the ticketing agent did not reimburse the first ticket as promised. The cost of two air tickets, but repeated delays. After complaining for a month, the other party was only willing to refund the original 19,140 yuan for the ticket instead of 29,500 yuan for the second ticket. "The difference between the last two tickets needs to be borne by me. This is the loss caused by the other party's breach of contract. The difference should not be borne by consumers.”

Xue Liangquan added that he inquired about the ticketing agent through China's Tianyancha platform. It is a small company registered in Tianjin Binhai New Area, and there have been many disputes and lawsuits about ticketing agents, almost all of which are It was overseas Chinese who came to ask for a refund, which generally reflected that the ticketing company breached its contract and did not abide by its promise.

"I think this ticket company has serious breaches of contract and fraud. They finally told me that the ticket was gone. I guess they sold the ticket to someone else at a high price." Xue Liangquan said, "I am willing to Share your own personal experience, show your opinions, and warn the vast number of overseas Chinese not to step on the thunder when buying a return ticket in the future." 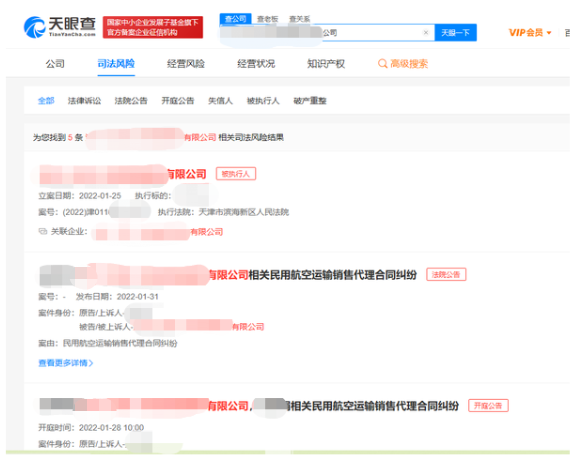 The ticketing company has had a number of disputes and lawsuits involving ticketing agents.

3. "I will pursue it to the end and file a lawsuit in China"

Xue Liangquan said that after the WeChat article was published, he received a lot of similar experiences. netizens replied,Many of the victims were customers of the same ticketing company as him. "Some domestic victims have sued the company and won the case. The court ruled that the ticketing agency's behavior was a breach of a business contract and needed to compensate customers for their economic losses."

Xue Liangquan emphasized that the ticketing agency has no business in the United States. The entity company is only registered in China, and the customer can only go back to China to file a lawsuit before the court can accept it. The domestic legal fees, litigation fees and other expenses add up, and are far greater than the airfare itself. "Many Chinese people in the United States can only consider themselves unlucky when they encounter this situation, because the cost of rights protection is too high, and the gains outweigh the losses."

"They are also unlucky this time, and they met me. Others encounter this This situation may be over, but I am a lawyer myself, and even though I live in the United States, I will pursue them to the end and will not let them go. I plan to file a lawsuit against them in Binhai, Tianjin, and use legal weapons to prevent them from continuing to go unpunished. "Xue Liangquan said.

In this regard, Xue Liangquan specially established the "Air Ticket Fraud Rights Protection Fund" to use To help those Chinese compatriots who suffered air ticket fraud to defend their rights. "Because there is usually not much money for air tickets, the ticket dealers seize this point, so that consumers do not want to defend their rights, it is not worth defending their rights, and finally let it go and admit it, then the ticket dealers succeed. I want to bring the victims together. If this fund is enough to support the cost of rights protection, such as investigating and prosecuting in China, then the victims do not need to pay any fees.”

Xue Liangquan emphasized that all overseas Chinese, if they have ever lost their lives because of booking air tickets Being deceived and entrapped is not limited to the company he exposed, but also includes other individuals, companies, and institutions of ticketing agents, and the public can contact him directly.

First of all, be sure to buy tickets through formal channels, such as large ticketing platforms and airline official websites, and the rights and interests of consumers who buy tickets on formal platforms Guaranteed. In particular, don't trust the various ticket agents and ticket dealers online. They may use the members' mileage points to redeem the tickets and resell them to consumers. Such tickets are not guaranteed to be changed or refunded. In the end, consumers can only let the consumers themselves. take risks.

Secondly, don't put too much trust in transactions on WeChat. "You don't even know who the recipient of the WeChat transfer is, and you don't even know whether the other party is in China or the United States. It is easy to transfer money to him. In the end, it is difficult to defend rights."

Xue Liangquan suggested that when the real identity of the other party cannot be verified, do not easily transfer money to others through WeChat. In the event of a dispute, the cost and price of rights protection is high.