"School scum" counterattacks and becomes a scholar with an annual salary of more than 200,000 and signs with Alibaba

Release Time:2022-04-25 Topic:Buy 100,000 Alibaba shares in 2014 Reading：110 Navigation：Stock Liao information > Education > the University > "School scum" counterattacks and becomes a scholar with an annual salary of more than 200,000 and signs with Alibaba phone-reading 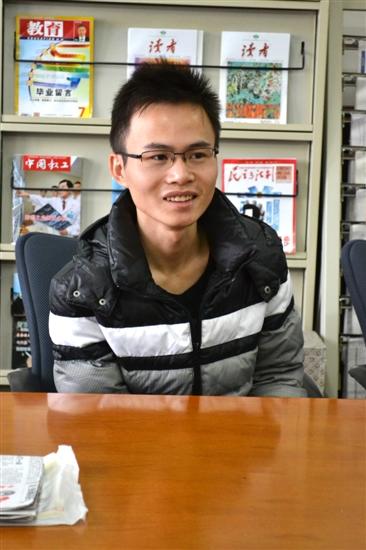 Recently, Song Zhongping, a senior student at the School of Information, Northeast Forestry University, signed a contract with Alibaba Group with an annual salary of more than 200,000 yuan, becoming the first student in the class to find a job. During his college years, Song Zhongping often participated in relevant professional competitions and internships, and his hands-on ability was very strong. Like Song Zhongping, in the School of Information, there are 9 students who also signed contracts with well-known companies and enterprises such as Baidu and Sina with an annual salary of more than 100,000 yuan.

The annual salary of more than 200,000 senior students signed with Alibaba

"I'm very sorry to inform you so late, you passed the interview, please come and sign a letter of intent tomorrow." In the early morning of September 19, Song Zhongping, a fourth-year student majoring in computer science (information security) at the School of Information, Northeast Forestry University, received a text message from a staff member in charge of recruitment by Alibaba Group and became a full-time employee of Alibaba. He can go to work in Alibaba, and he can get an annual salary of more than 200,000 yuan. Song Zhongping excitedly shared the news with his parents. Although his parents were farmers, they didn't understand his son's major, but he knew that his son found him. He got a good job and was happy for him, and told him to "continue to study hard".

Song Zhongping's class has 25 students. He was the first to find a job, and his annual salary of more than 200,000 set a new record for his college. Recently, Song Zhongping also passed the interview of Baidu, but the work place is in Beijing, because he prefers the city of Hangzhou, he finally chose Alibaba.

In fact, Song Zhongping's academic performance was not good when he first entered the university. In the first semester of his freshman year, his grades were the last in the class, and he failed 4 of 6 courses. When the counselor learned that Song Zhongping had done a lot of part-time jobs outside the school in order to earn living expenses, and delayed his homework, he helped him apply for a bursary and taught him that his main task now is to study. Not worth the loss. He also introduced him to the ACM-ICPC (International Undergraduate Programming Contest) undergraduate laboratory, and formed a team to participate in the programming competition under the leadership of the instructor.

After that, Song Zhongping found his interest and devoted himself to programming. In the beginning, he didn't understand anything, and he couldn't get a place in the competition, but he kept insisting. Although he spent a lot of time on the competition, he did not delay his studies this time. After returning from the laboratory to the dormitory every night, he began to make up for the missed lessons. Just in the first semester of his freshman year, Song Zhongping's academic performance jumped from the last place in the class to the first place, and he has maintained an above-average academic performance since then. Since his sophomore year, Song Zhongping has won awards in various programming competitions.

During college, Song Zhongping never went home during summer vacation, and during winter vacation, he came home late and returned to school early. In addition to studying, he devoted all his energy to programming competitions. There are three people in the team. They often participate in international and domestic college students' programming competitions, and they have also won more than ten awards in the International College Students' Programming Competition and the Heilongjiang Provincial College Students' Programming Competition. This summer, Song Zhongping interned at Tencent for two and a half months, and got an intern offer (invitation).

At the beginning of September this year, Song Zhongping gave up his qualification for research and development, submitted his resume to the official website of Alibaba Group, and successfully applied for the company's technology research and development position through various selections. Now, Song Zhongping is preparing to go to Nanjing to participate in the programming competition for college students. He will go to the company for an internship after the Spring Festival. After graduation, he can officially stay in the company and work.

According to the staff of the public and customer communication department of Alibaba Group, this year, due to the increasingly common use of mobile application software and the rapid development speed, a large number of technical research and development talents are needed to develop such as "Alipay Wallet" , "Reciprocal" and other practical and convenient mobile phone applications. Therefore, in terms of recruitment numbers, the company only recruited 170 applicants nationwide from last year.The number of graduates has increased to 1,000 fresh graduates. This year, Alibaba Group recruited about 40 undergraduate and master graduates in our province, which also exceeded the number in previous years. Moreover, the recruiting colleges are not limited to the fresh graduates of Harbin Institute of Technology, Northeast Forestry University and other colleges and universities. As long as they have the right major, they will have the opportunity to apply for success.

How can I become an Alibaba employee and pass the interview successfully? In the words of "Ali people", it means "to the taste". Alibaba Group values ​​all kinds of "control" in recruitment, whether it is "competition control", "technical control" or "learning control", as long as the professional knowledge base is good, and there is "one skill", then there is a chance to become a "Ali". This is also one of the conditions that Alibaba Group attaches more importance to candidates during the interview. After entering the company, the company will consider whether the applicant meets the company's requirements in terms of corporate culture and values, as well as employees' own comprehensive capabilities.

10 students with annual salary of more than 100,000 yuan and strong practical ability

Like Song Zhongping, Peng Gangqiang, majoring in information and computer science from the School of Science of Northeast Forestry University, also signed a contract with Alibaba Group. Although he is not a professional, he has always liked computer science and taught himself C++. The questions that I don’t understand at ordinary times are like the students of this major who ask for advice humbly, and have been admitted to the intermediate software engineer. During his college days, Peng Gangqiang often participated in mathematical modeling competitions such as the International and the Three Northeast Provinces, and achieved many good results. And relying on his own advantages in mathematics, he has won the favor of Alibaba Group, and became an Alibaba technology research and development personnel with an annual salary of nearly 200,000 yuan.

In addition to Song Zhongping, 2 people from the School of Information signed with Baidu, 1 signed with Sina, 4 signed with UFIDA, and 1 signed with Ping An Technology. 9 students have signed contracts with well-known enterprises and companies, and all of them have an annual salary of more than 100,000 yuan. Compared with the same period in previous years, when only two or three students could sign up, the employment performance of the School of Information this year has set a new record in previous years, and the highest annual salary has reached more than 200,000, which is a typical example of high-quality employment.

According to Zhuang Wenpei, secretary of the Youth League Committee of the School of Information, Northeast Forestry University, in addition to mobilizing students for employment when they are in their third year, the school will guide students to find jobs early, and their own advantages are also very important. These contracted students have one thing in common. They are able to clarify their goals, consciously improve their skills, enhance their internship and training experience, and ultimately improve their professional skills, and have strong practical ability. One of the reasons why many students have successfully signed up with well-known companies this year. (Reporter Shi Dongxu text/photo)