Why were 20-year-old investors cheated of 500,000? The groups of liars set up layers upon layers, scooping away the last wool...

Mr. Chen, who lives in Guangzhou, has been investing in stocks for 20 years. He has never hit a new stock before, but after getting in touch with a private equity firm, he has won several new stocks within half a month, which makes Mr. Chen feel lucky . However, behind the "good luck" is deceived nearly 500,000. It turned out that it was not his luck, but a well-planned scam.


In December last year, an account with a beautiful avatar added Mr. Chen's WeChat account. Qi", and asked Mr. Chen if he had any idea of ​​investing in stocks. As a veteran investor, Mr. Chen immediately became interested and chatted with "Shi Qi". "Shi Qi" recommended him to join a stock trading training group taught live by "professional tutors", so Mr. Chen joined the group using QQ.


There are many stock speculators in the group, who discuss stock-related content every day, with frequent interactions and a very warm atmosphere. In addition to the assistant "Shi Qi", there are also two "professional tutors" who lead the operation of the group, calling themselves "Lin Zhihui" and "Wu Feng", who will broadcast four training sessions in the group every day. After listening to several training courses, Mr. Chen felt that the other party was indeed like a connoisseur, and he spoke well about stocks.


In addition, the two teachers also behaved quite generously. "The stock enthusiasts distributed welfare, and even took out the profit dividend of "tens of millions of trading funds" as a reward. Mr. Chen has received three dividends, ranging from dozens to more than one hundred yuan.


In addition, "Shi Qi" also claimed in the group that she could receive benefits such as mobile phones, computers, TV sets, washing machines, etc. The lottery activities such as the one-year right to use BMW cars and cash prizes of 66,666 yuan and 8,888 yuan have been released, but it is unknown whether anyone has won the lottery. 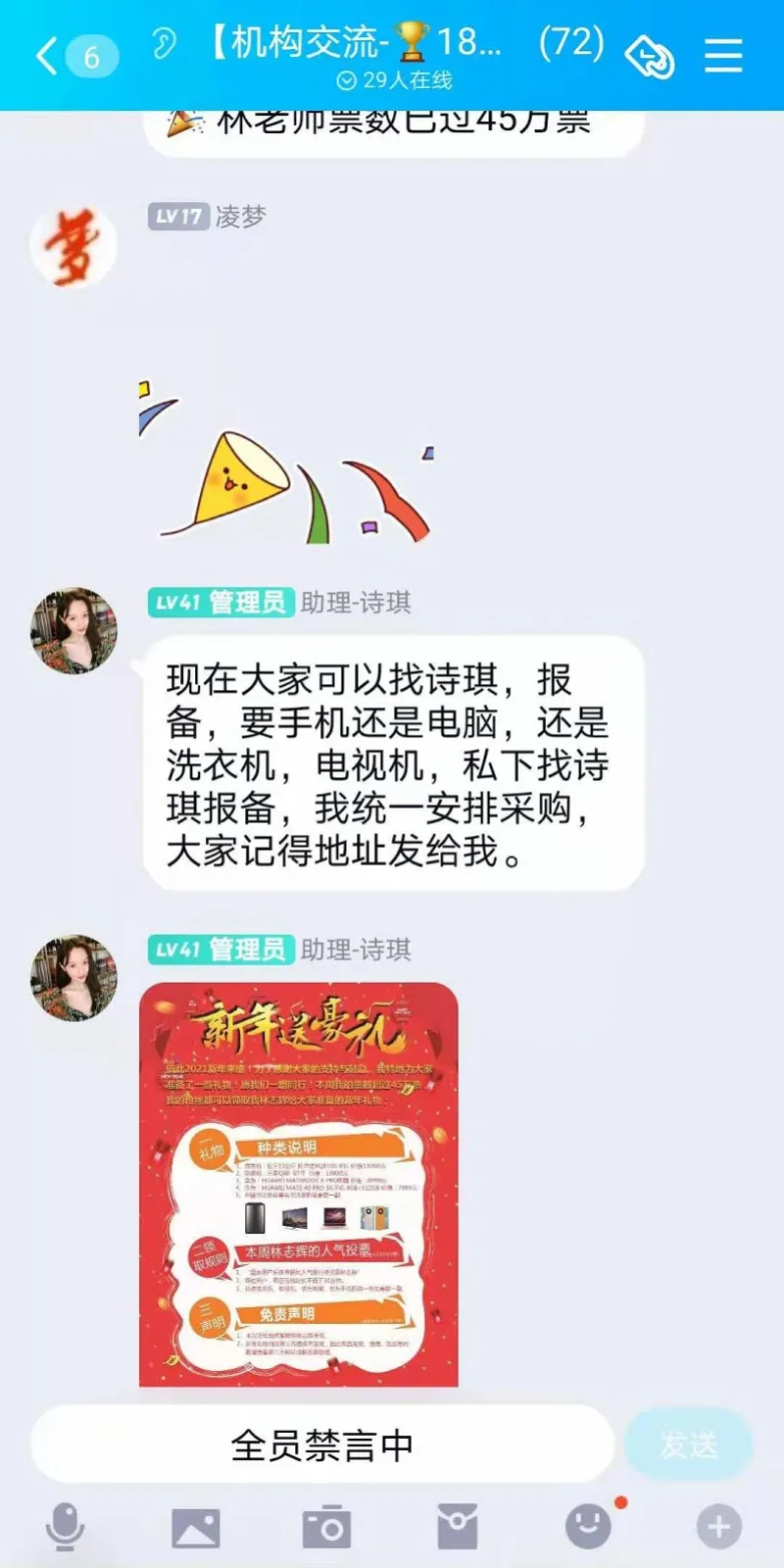 
“Professional” stock trading training, encouragement from teachers and group friends, and “rich” benefits, Mr. Chen gradually let go of his guard and began to invest with his teacher.


After gaining the trust of Mr. Chen, teacher Wu Feng declared in the live class that his private equity firm and a Hong Kong company named "Rova Securities" The institutions have cooperation, and stated that Industrial Securities is one of the shareholders of Rover Securities, and Rover Securities is a formal platform.


Wu Feng said that he can lead everyone to chase the daily limit on the "Rova Securities" platform, or he can Take advantage of the institution's dedicated seats substantiallyIncreasing the odds of hitting new stocks makes Mr. Chen very excited.


Since Mr. Chen showed his "execution ability" in investment, soon, "Shi Qi" He invited Mr. Chen to another core QQ group. In the group, Lin Zhihui and Wu Feng instructed everyone to "use institutional seats to subscribe for new shares". In just a few days, Mr. Chen has won the lottery several times in a row, and the number of lottery shares is also very high, and he is not the only "good luck" , other members of the group also said that it is easy to win the lottery.


In this regard, some members of the group said, "The institutional channel itself has a relatively high winning rate, and the number of winning shares is also higher than that of retail investors. More.”


When someone was unable to keep up with the funds due to the high number of winning shares, the above-mentioned member of the group said that , "The teacher gave everyone such a good opportunity. If you give up, it will not only affect your own reputation, but also affect the teacher's organization and cause everyone to have a low rate of winning the lottery in the future." He also encouraged others to "find friends to raise funds", saying that "the listing can be turned over at least two times." three times".


This inspired Mr. Chen. To win shares, Mr. Chen even borrowed money from friends to make money. It was not until he finally discovered that he had been deceived that Mr. Chen came to his senses. It turned out that these people were all "children".


On January 26, Mr. Chen completed the final payment for the winning shares, and happily waited for the IPO funds to double on February 1 At that time, on January 29, Manager Liu of Rover Securities sent an important message, saying that "Wu Feng" led the staff of his agency to illegally and maliciously hold shares and trade in the company. The stock market order, was filed for arrest by the Hong Kong Securities Regulatory Commission.

Screenshot of the QQ group. Photo provided by the interviewee


Manager Liu told Mr. Chen that he could apply for unfreezing personal trading funds, but he must follow the requirements of the China Securities Regulatory Commission Submit 10% margin (in proportion to the total market value in the account).


This time, Mr. Chen panicked, but in order to get back the funds in the account, Mr. Chen, under the instructions of Manager Liu, followed the 10% of the total market value in the account was transferred to the bank account provided by it. But after more than half a day, Mr. Chen has not received the refund.


Mr. Chen went to the group to inquire about the payment status. Many members of the group said that they had received the refund, and others Said that he had asked Manager Liu to do an expedited service, and the account was received in more than an hour. In a hurry, Mr. Chen approached Manager Liu again to do urgency. Manager Liu said, "The expedited fee of 2,000 yuan must be submitted for urgency. The expedited fee will not be refunded. It is for the personnel of certain units." It will be available in the next two hours.


According to Manager Liu's instructions, Mr.Another bank account it provided transferred a 2,000 yuan expedited fee. However, after the transfer, the funds did not arrive in the account within two hours as Manager Liu said. When Mr. Chen asked Manager Liu again, he found that he had been blocked by Manager Liu.


Subsequently, Mr. Chen consulted "Shi Qi" again, but "Shi Qi" did not reply to the message, and soon, the QQ group It was dissolved, and the “Rova Securities” APP could not be logged in either. At this time, Mr. Chen realized that he had been deceived, and the nearly 500,000 yuan he had invested in has disappeared.


Rover Securities: Is Industrial Securities one of its shareholders?


What kind of company is Rover Securities? The reporter searched the website on Baidu and found that the company was established in Hong Kong in 1997, the company number is: 0632123, and it is a private limited company. On Baidu Information, there are also some information articles about Luhua Agency, saying that it "has the AER871 license issued by the Hong Kong Securities Regulatory Commission as early as 1997". 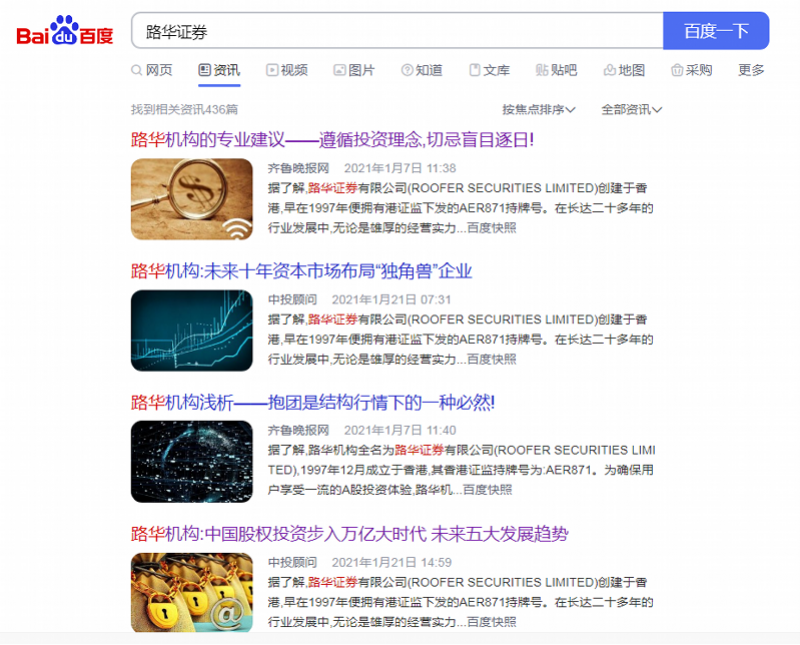 Baidu information, there are still some Articles about Luhua Institution


"I could find the name of this company on Baidu at that time, and there are also relevant information articles in it. , and the customer service also told me that Industrial Securities is one of his shareholders, so I believed that they were a formal investment institution at that time." Mr. Chen said. Other victims also told reporters that the gang of swindlers once claimed to be employees of Industrial Securities.


In this regard, the reporter called Industrial Securities for further verification. The company's customer service said that foreign investment is not within the scope of information disclosure, and it cannot disclose whether it is a shareholder of "Rova Securities", but "there are many incidents of swindling and cheating under the banner of our company, we cannot be responsible for this, and this requires investors themselves. Identify and be vigilant.”


Victims all over the country, helping each other


The reporter searched the Internet and found that since the end of January 2021, many victims have been posting, painful Tell yourself about your experience of being deceived. The reporter joined one of the WeChat groups of victims of the "Luhua Securities" scam, and found that the victims were from Guangdong, Zhejiang, Fujian, Yunnan and other places, and the defrauded amount ranged from a few hundred yuan to less than four or five million yuan. At present, the amount of money involved in the case is nearly two million. 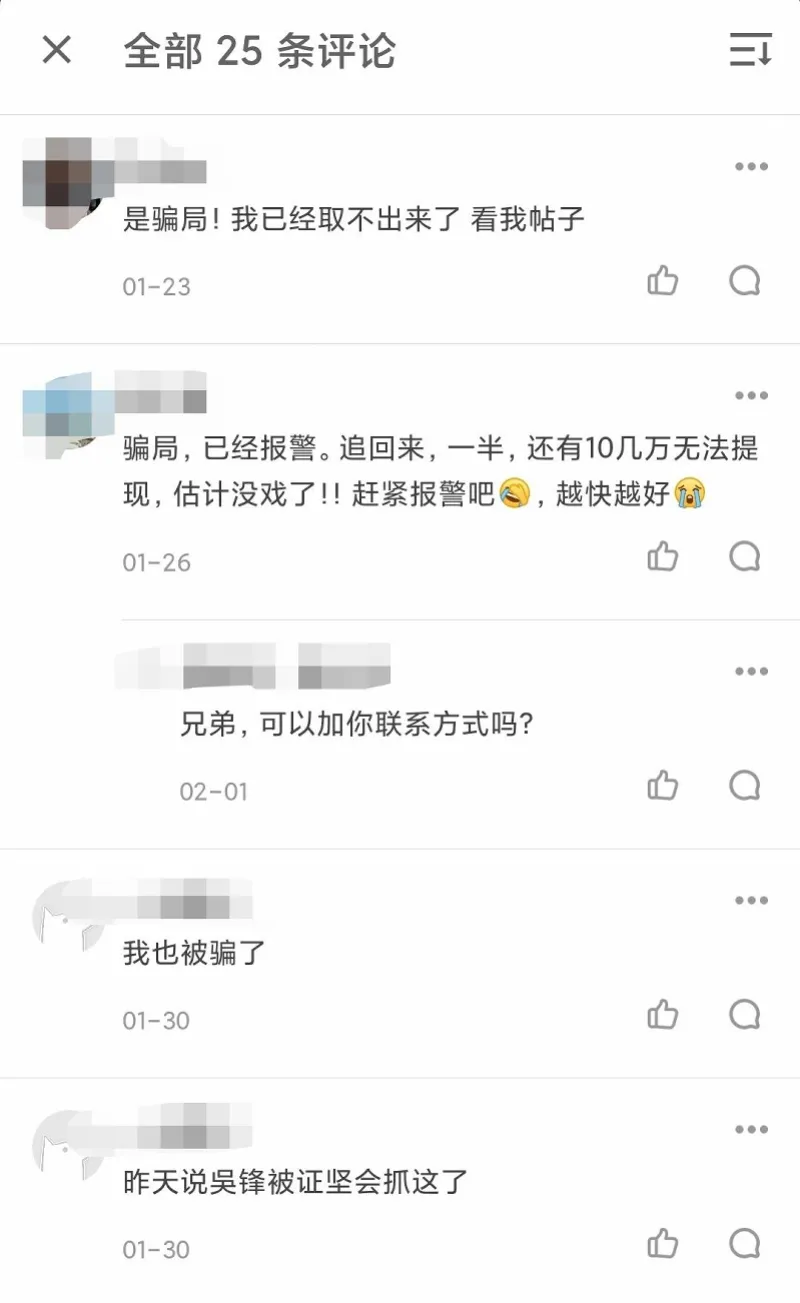 
"Hurry up to the police, the sooner the better!" A victim said that the police had helped him recover half of the Losses, there are still more than 100,000 yuan that cannot be withdrawn.


Another victim in Zhejiang said that he was defrauded of nearly 600,000 yuan in just over ten days , After "Mr. Wu Feng was investigated and the account was frozen", he promptly reported to the local public security. Originally, he also planned to pay the so-called 10% "guarantee" to put all theThe funds were transferred out, but fortunately, the police dissuaded them in time. It is understood that the local police have locked some relevant bank accounts and helped him recover the loss of more than 30,000 yuan.


The reporter found that there are many posts on the Internet under the banner of "legal aid" and "help recovery", claiming that they can help Victims filed claims against Rova Securities. The police handling the case in Dongyang, Zhejiang told the informant that the so-called "lawyer working with the police to handle the case" is simply nonsense. If the other party asks the victim to pay, don't believe it!


Guangzhou police have filed a case


2 On the morning of January 24, Mr. Chen, accompanied by reporters, went to the Tianhenan Police Station in Guangzhou to inquire about the progress of the case. Police said a case has been filed and investigations are underway.


The police officer on duty at the Anti-Fraud Center in Tianhe District, Guangzhou told reporters that once the victim's funds are transferred to the fraudster's bank account, it is very It will soon be transferred to overseas accounts through multi-level transfers, which makes it more difficult for the police to trace the defrauded funds.


The telecommunication fraud crime of investment and wealth management APP is fierce. Guangzhou Public Security reminded that, different from "killing pigs", investment and wealth management fraud is more direct, directly pulling the victim into various investment group chats, brainwashing the victim with live tutorials, and letting the victim see other people in the group every day. are making money. They take advantage of people's desire to make money and commit scams under the guise of online investing. In the Internet age, the cost of creating a wealth management website or app is extremely low. At the same time, scammers also create fake wealth management tutorials in batches. The so-called active teaching groups with hundreds of people are almost all “childcare” pretended by scammers, constantly spreading profit news. The purpose of advocating the value of the platform and trying to package it is to let the victim transfer the money to the personal account and company account set up by the liar. Once transferred, the funds are quickly transferred layer by layer, laundered, and stolen by the crooks, and it is difficult to find any traces of them.