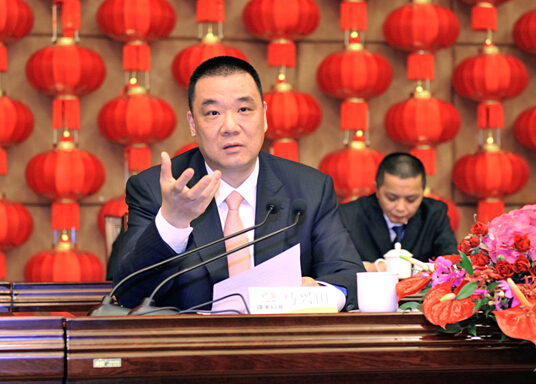 Ma Xingtian, Chairman and General Manager of Kangmei Pharmaceutical, made a work report at the meeting

The National Health and Health Conference was held in August 2016. This is the first National Health and Health Conference held by the Party Central Committee and the State Council since the new century. The conference proposed that efforts should be made to "protect people's health in an all-round and full cycle". In the same month, the State Council approved the establishment of an inter-ministerial joint meeting system for traditional Chinese medicine, with Vice Premier Liu Yandong as the convener;

In early December 2016, the State Council Information Office published the first white paper "Chinese Medicine in China". At the end of the same month, my country's first "Traditional Chinese Medicine Law" was reviewed and approved by the Standing Committee of the National People's Congress, and will be officially implemented on July 1, 2017...

Ma Xingtian said that Kangmei Pharmaceutical has taken advantage of the great development of traditional Chinese medicine to usher in the right time, place and people. Good achievements have been made in brand promotion, collaborative innovation, and service-oriented management atmosphere, and a new round of growth has been achieved. The company ranks among the top 2000 global enterprises, won the top 500 Chinese brands, and the top 20 most competitive listed pharmaceutical companies in China.

Ma Xingtian pointed out that, as a leading enterprise in the big health industry, Kangmei Pharmaceutical has been adhering to the core concept of "caring for the common people and boundless love" and the business philosophy of "moving the world with love and managing health with heart" for the past 20 years. The guiding ideology of the two major strategies of "Healthy China" and "Healthy China" promotes the integrated development of traditional Chinese medicine and general health in an orderly manner. In the past year, the company focused on "maintaining profit and maintaining prosperity

The development idea of ​​"Yunkai Longteng" has continuously inherited and innovated, and realized precise operation, precise management, precise production and precise service. With the precise service of the big health industry as the center, three transformations have been realized, namely, the realization of the traditional Chinese medicine industry to the large-scale medical industry. The fundamental transformation of the health industry; to realize the fundamental transformation from traditional supply and demand to interactive sharing; to realize the fundamental transformation from simple service to precise service. At the same time, five emphasis are emphasized, namely, focusing on the guarantee and support of industrial extension, and focusing on improving the company's capital allocation; Focus on the reform and optimization of the organizational system, focus on the implementation of system construction and the adjustment and adaptation of structure functions; focus on the coordination and sharing of big data resources, focus on data collection, analysis and application; focus on the construction and application of socialized customer management systems, focus on Resource integration and service coordination in the market; focus on the cultivation and introduction of talent teams, and focus on the consideration of people's talents and potentials.

Ma Xingtian said that there has been an important turning point in the current development of the health industry. First, the big health industry has gradually formed a closed loop, and its business model has begun to highlight, and the entire industry has transformed from an extensive to a refined development model; second, information technology represented by mobile medical care, cloud computing, big data, and the Internet of Things has penetrated To every link of the industry, it supports the transformation in the above two directions, while serving the health industry, it also strengthens the medical information service industry.

Accordingly, Ma Xingtian proposed that theThe overall development goals of the US pharmaceutical industry in the new year are: to keep upright, adhere to the standardized development of the traditional Chinese medicine industry, and create a new miracle of "wisdom + big health industry"; work together to promote the brand upgrade with the core value system, in order to comprehensively improve the big health Industry precision service system and continue to work hard. He pointed out that in 2017, on the basis of the big health industry, Kangmei Pharmaceutical should insist on focusing on one center, achieving three firmness and six efforts. A center is centered on the comprehensive improvement of the full-life-cycle large health industry precision service system with traditional Chinese medicine characteristics. Three firmness, namely firming up the company's core concepts and implementing the company's core values; firming the development direction of the traditional Chinese medicine industry, implementing the vertical and horizontal development strategy of the entire industry chain of traditional Chinese medicine; firming the innovation-driven development strategy and implementing breakthroughs and flexibility in thinking. Six focus, namely, focus on building corporate culture, focus on tapping the potential of the marketing system, focus on strategic expansion, focus on integrating capital market resources, focus on improving R&D technology, and focus on deepening management reform. The meeting also commended Kangmei Pharmaceutical's 9 outstanding functional groups, 6 outstanding management groups and 190 outstanding individuals.