It failed again! Sports "big coffee" Hupu has been listed for 6 years, and the IPO is terminated again. ByteDance lost the bet?

6moon23Morning，CICC and Orient Fortune Securities jointly announced，GivenHupu intends to adjust its listing plan. CICC, Orient Fortune Securities, and Hupu have agreed to terminate the counseling agreement and terminate the guidance for Hupu's initial public offering and listing. At this time, it has been 6 years since Hupu officially launched its listing plan.

On April 22, 2016, Hupu submitted the IPO prospectus for the first time under the guidance of CICC, but soon applied for termination of the listing review in early 2017. In March 2019, Hupu re-signed a listing counseling agreement with CICC and Orient Fortune Securities to conduct listing counseling again, but ultimately chose to give up.

CICC and Orient Fortune Securities in June Jointly stated on the 23rd that in view of Hupu’s plan to adjust its listing plan, the three parties involved agreed to terminate the counseling agreement and terminate the guidance for Hupu’s initial public offering and listing. This is the second time Hupu has terminated its IPO plan.

The predecessor of Hupu is the hoopCHINA basketball forum founded by Cheng Hang in Chicago in January 2004. Over the past 17 years, Hupu has developed portals, competitions, e-commerce, offline activities, game intermodal transportation, funds and other diversified businesses from basketball forums, and has become an influential platform in the sports field. The platform is dominated by male users and has become a well-known "straight male" community on the Internet. 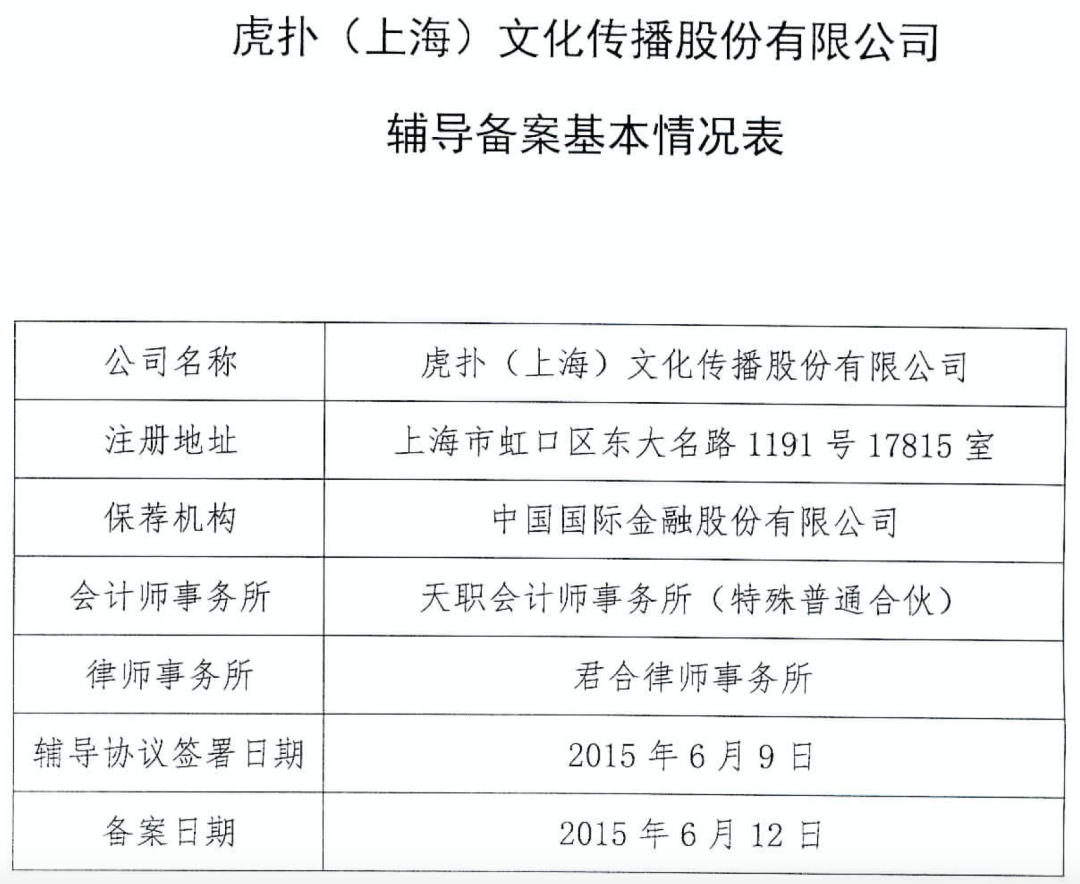 Things come back to2015yearOn June 12, Hupu completed the listing guidance and filing under the escort of CICC. After that, during the 8-month tutoring period, after due diligence, intensive teaching, analysis and discussion, standardization and improvement of the system, CICC finally announced in February 2016 that Tiger Punch "has been able to provide China Conditions for the CSRC to submit applications for initial public offering of shares".

So on April 8, 2016, Hupu submitted the IPO prospectus for the first time, planning to issue 33.334 million shares and raise them. The fund is 420 million yuan, of which 320 million yuan will be used for the upgrading and transformation of the Internet technology platform, and the remaining 100 million yuan will be used to supplement working capital. Hupu said that the domestic sports industry infrastructure is relatively backward, and the transformation and upgrading of the Hupu Internet technology platform will effectively make up for this link and further consolidate the leading position of Hupu Sports in the Internet sports industry.

However, what is unexpected is that Hupu did not receive the good news of being approved for listing soon. Instead, it terminated its listing application in early 2017. At that time, the China Securities Regulatory Commission stated that Hupu had problems such as high accounts receivable balance, declining turnover rate, large fluctuations in performance, large differences in net cash flow and net profit from operating activities, and accounting for intangible assets. The normativeness is doubtful.

And other media reported that Hupu Sports originally hoped to backdoor *ST Yaxing to be listed, but with *ST Yaxing’s restructuring transaction failed, and Hupu Sports’ first listing plan also suffered a miscarriage.


The second impact is broken again

The time comes to March 2019, and Hupu plans to regroup again In response to the A-share listing, CICC and Orient Fortune Securities were selected to jointly sign a listing counseling agreement. The two sponsors appointed a total of 17 people to form a Hupu IPO project counseling working group.

Arrived2019 In June 2008, the coaching work progress report revealed that Beijing Quantum Jump Technology Co., Ltd. ("Quantum Technology" for short) received the transfer for 840 million yuan and increased its capital in Hupu, and finally became the second largest Hupu with a 20% shareholding ratio. shareholder. Since then, Hupu has no further news about the progress of the listing counseling work, until today Hupu announced the termination of the IPO application again.

However, although the IPO plan has been temporarily terminated, Hupu has actually introduced two pretty good shareholders in recent years.

According to Tianyan Check data, on June 6, 2019, Bytedance invested 1.26 billion yuan in capital increase in the Pre-IPO round Hupu holds a total of 30% of the shares (including 20% ​​through Quantum Technology and 10% through Wenxue Technology). ByteDance said that the two parties will carry out comprehensive cooperation around content interoperability and collaborative services for content creators, so that information can create more value for users. Hupu also revealed at that time that the management headed by CEO Cheng Hang is still the actual controller of Hupu.

It is worth noting that after 2015, Hupu has invested a large amount of shares through the two-phase Dynamic Capital Fund under its management. Most of China's top-quality sports startups, including Dengqiu Di, Kunlun Jue, Super Gorilla, Happy Running Circle, and Runaway Lolita. Among them, Super Gorilla has completed hundreds of millions of yuan in Series E financing in May this year, with a total valuation of nearly 1 billion U.S. dollars, led by a fund of CICC Capital.

1 Does anyone notice the background board while watching the Euros?
2 Tongdaxin time-sharing main picture, hit the board to do t chasing up, all-weather source code
3 It failed again! Sports "big coffee" Hupu has been listed for 6 years, and the IPO is terminated again. ByteDance lost the bet?
4 Mi Band 6, exercise data in one hand
5 It is because you are not up for it, this time the monthly gap filling operation has been cancelled.
6 [Tiger Sniff Morning Post] U.S. stocks plummeted, and Apple’s market value evaporated over US$150 billion overnight; Premier League announced the termination of contract with Chinese broadca
7 Tongdaxin volume and price resonance and low-purchase stock selection or early warning formula
8 Tongdaxin Volume and Price Spatio-temporal Attached Drawing Indicators Textured Source Code
9 How do you think that the incomplete leeks of Zhihu [email protected] and @Investor shares Hamming Lantern have become public?
10 The first stock of cloud computing, Youkerde, is listed on the Science and Technology Innovation Board, with innovations in hard technology strength and implementation of the CBA strategy