Hong Kong stocks were sold collectively by smashing the board and diving! European stocks collapsed, more than 100 countries suspended flights to the UK, and South Africa even spread bad new

On the 22nd, the Hong Kong stock market had a sudden change. Hong Kong stocks plummeted by 1%, and many A-shares hit the daily limit! Abrupt changes in overseas markets last night, the emergence of new variants of the new coronavirus in the UK, and more than 100 countries around the world banned British flights. What's more serious is that the mutated new coronavirus spread to the African continent, and South Africa was directly banned from flying by eight countries. What is the situation?

The A-share daily limit hits the board, and Hong Kong stocks are sold off.

VV shares (600,300 shares), which had a daily limit before, were sold sharply in the afternoon, and the current increase is less than 9%.

Hong Kong stocks plummeted in the afternoon, and the star stocks of Southbound Trading were collectively sold off!

TCL Electronics rushed in 15% and traded 50.57 million shares in heavy volume. There were even two large orders of nearly 500,000 shares, involving more than 200 million Hong Kong dollars. Prior to this, the company sold Jingchen to cash for nearly HK$700 million, while the company's market value evaporated by HK$2.4 billion in one day.

Daniu photovoltaic stock GCL-Poly Energy fell more than 10%, more than 1.2 billion shares were traded, and the market value evaporated by more than 2 billion.

Minmetals Resources fell by more than 10%, and the trading volume in the afternoon was heavy. At 14:31 there were transactions involving nearly 1.2 million shares, involving a capital of 3.88 million Hong Kong dollars.

The recent big bull stock Luoyang Molybdenum fell more than 8%. After 2 o'clock, there were two big orders, and even nearly 3 million shares were sold in 1 second at 14:08, involving more than 10 million Hong Kong dollars.

BYD shares fell more than 6%, and CASH Financial issued an announcement to sell 80,000 shares, but only made 400,000. The income is worrying. In addition, Xinyuan Energy, BYD Electronics, and Jiumaojiu collectively fell.

The overseas market plummeted! The outbreak in the UK is out of control, and more than 100 countries have suspended flights

According to Global.com report, Thailand's largest seafood market caused a collective infection of new crown pneumonia. At the close of the 21st, the decline in the benchmark index of the Thai stock market expanded to 5.44%. Thailand’s largest seafood market, Mahachai Seafood Market, has been infected with COVID-19. As of the 21st, more than 800 cases of COVID-19 have been confirmed. The city of Samut Sakhon where the market is located has been “closed”. The Thai government is also considering A blockade is implemented across the country.

The UK has recently discovered a variant virus strain with a higher transmission rate. Health Secretary Matt Hancock said frankly on Sunday that the spread of the new virus strain has been out of control. Unless the new crown vaccine is further popularized, strict epidemic prevention measures will continue to take effect.

Most of the EU member states have imposed customs on the United Kingdom, and more than 100 countries including Canada, India, Russia, Switzerland, Iran, Saudi Arabia and other countries have temporarily banned British flights from flying to the local area to prevent the introduction of new virus strains from the United Kingdom , Making Britain like an island.

The World Health Organization (WHO) stated that in addition to the United Kingdom and England, Denmark, the Netherlands and Australia have all discovered variants of the new crown pneumonia, urging European countries to redouble their prevention and control measures.

The new variant virus is named "VUI-202012/01", scientists estimate that its growth rate is 71% higher than that of other strains. The R value representing the basic infection number (the average number of people infected by a patient) increases by 0.39 to 0.93, and it is more likely to increase the R value. The value is pushed up to above 1. When the R value is greater than 1, it means that one patient can infect more than one person. 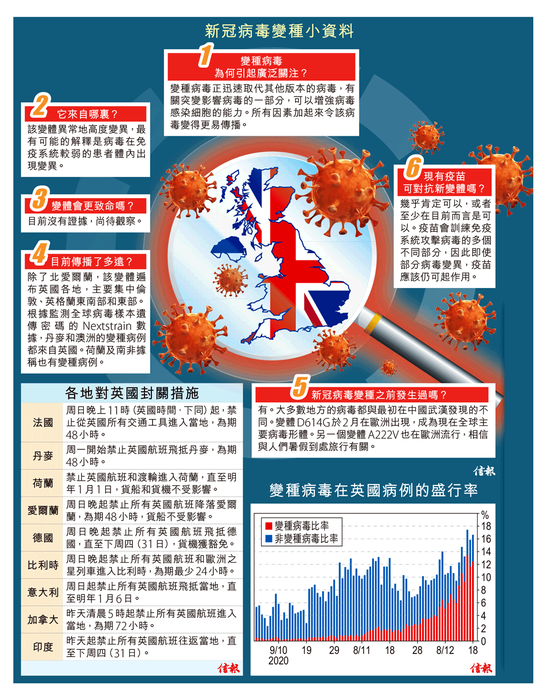 European stock markets took a hit on Monday. The British stock market had hit more than 3% to a low of 6,315 points. The German stock market had also plummeted by more than 4%. Even the stocks listed in Hong Kong and involved in European business were also hit by the disaster. HSBC Holdings (00005) was as low as HK$38.5 in London, 2.5% lower than the Hong Kong market closing! The analysis reminds that once the epidemic goes out of control, it will further bring down the European economy and even ignite a new round of financial market crisis.

While the mutated new coronavirus in the UK has attracted global attention, a mutated virus has also appeared in South Africa.

At the WHO press conference, Maria Van Kokhoff, the technical director of the WHO's health emergency project, said that the variant of the new coronavirus discovered in South Africa is different from the variant that appeared in the UK. Although appearing in the same period, they seem to be related to each other, but they are unrelated variants. South Africa has notified the WHO of the preliminary results of some studies.

A few days ago, South African medical experts discovered through genetic sequencing that the new coronavirus in South Africa has mutated,

and is "making young and healthy people seriously ill."

After the announcement of the above news, on December 21 (Monday), eight countries including France, Germany, Saudi Arabia, Sudan, Switzerland, El Salvador, Turkey and Israel announced the prohibition of flights from South Africa.

Switzerland even issued a retrospective order. Switzerland announced on the 21st that it will retrospectively isolate all immigrants from South Africa since December 14. All persons must be isolated for 10 days.

Countries have taken preventive measures and are at the highest level of vigilance. Many countries have set travel restrictions. Governments are very cautious about any variation and study its potential impact. With the advent of holidays, everyone must stop the spread of the new crown virus.

WHO: The British variant strain is easier to spread, and the current vaccine is still effective

Regarding the recently reported variants of the new coronavirus strain in the UK, WHO officials said at a press conference held on the 21st that it is a normal phenomenon for the virus to have variants, and scientists are conducting in-depth research on this. The current key is still Take actions of the whole government and the whole society to curb the spread of the virus as much as possible.

WHO Director-General Tan Desai said that the virus strain has been mutating, which is normal. The current report in the UK claims that mutant strains are easier to spread, but there is currently no evidence that new strains cause higher rates of severe illness and higher mortality. WHO is working with scientists to study the impact of genetic changes in virus strains on the spread of the virus. Tan Desai emphasized that all efforts must be made at present. The whole government and all members of society should act together to take necessary measures to curb the spread of the virus. The more severe the spread of the virus, the greater the chance that the strain will mutate.

Real-time statistics from the World Health Organization show that as of 17:58 on December 21, Central European time (0:58 on 22nd, Beijing time), the number of confirmed cases of new coronary pneumonia reported globally increased by more than 570,000 from the previous day. Up to 575551 casesThe number of diagnosed cases exceeded 75.7 million, reaching 75,704,857. Globally, more than 1.69 million deaths from new coronary pneumonia have been reported, reaching 16,90061, an increase of 9,267 cases from the previous day.

US President-elect Biden publicly vaccinated against the new crown

The American Broadcasting Corporation (ABC) just announced that on Monday (21st) afternoon local time, US President-elect Biden publicly vaccinated Pfizer's new crown vaccine at ChristianaCare Hospital in Delaware. And encourage Americans to build confidence in vaccines and actively participate in vaccination. At the same time, he also urged Americans to wear masks during the upcoming Christmas holidays and not to travel unless necessary. According to the "Daily Mail" report, Biden had no adverse reactions when receiving the vaccine. The report also said that Biden's wife, Dr. Jill Biden, had been vaccinated earlier on Monday.

Biden’s transitional spokesperson said that Vice President-elect Harris and her husband will be vaccinated next week. Biden also praised the Trump administration during the live broadcast. He believes that the federal government's vaccine program is indispensable.

According to a CNN report, Biden also expressed gratitude to the personnel involved in vaccine development and distribution and front-line medical staff at the scene. He said: "We owe too much to these people."

Biden also said, "I did this to prove that people should be prepared to get vaccinated when a vaccine is available. There is nothing to worry about. I look forward to the second shot, and so does Jill." It also said that the promotion of vaccines is still in its infancy.

CNN said that on the same day, Biden also urged the American people to follow the advice of public health experts, wear masks, and maintain social distancing. It is not absolutely necessary and not to travel during the Christmas holidays.

According to reports, US Secretary of Health Jerome Adams (Jerome Adams) said on Monday that President Trump received monoclonal antibody treatment after he was diagnosed with new coronary pneumonia. Doctors wanted him to wait, so he has not been vaccinated. .

"I talked to his doctors and they want people to understand that if you have been injected with monoclonal antibodies recently, the Food and Drug Administration (FDA) says you should wait a few weeks before getting the vaccine." Adams told reporters, "So the president has not been vaccinated because his doctor advised him to wait."

In addition, the National Institutes of Health said that infectious disease expert Anthony Fauci is expected to be vaccinated on Tuesday (22nd) local time.