China's entry into the world's largest free trade zone, with over 90% of products or zero tariffs, will the impact be significant? 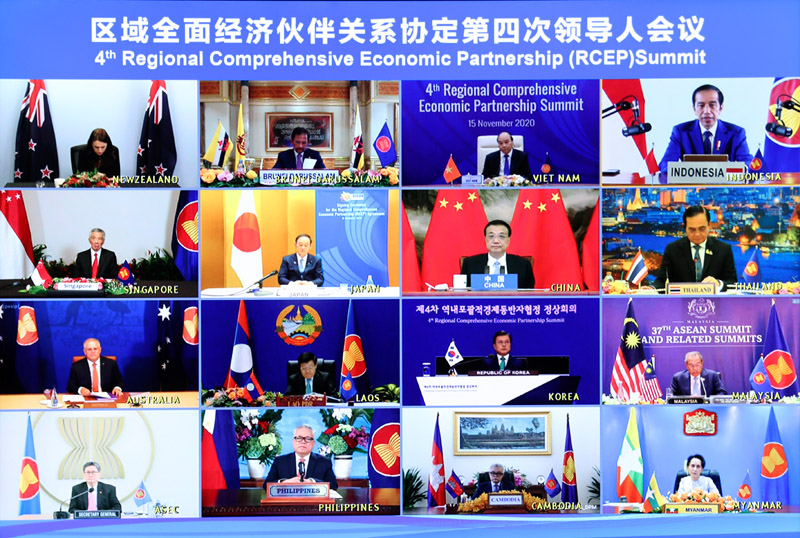 Just now, the "Regional Comprehensive Economic Partnership Agreement" negotiations were officially signed, which means With the birth of the Big Mac economic and trade circle covering 15 countries in the Asia-Pacific region!

The signing of RCEP means that the level of liberalization and facilitation of intra-regional trade has been further improved. It is understood that the scope of goods covered by tariff reduction in trade in goods has reached more than 90%. At the same time, unlike traditional free trade agreements, the agreements closely follow the development trend of global trade and incorporate many new forms of trade, including e-commerce, intellectual property rights, competition policy, government procurement, small and medium-sized enterprises, etc., which exceed the scope of WTO regulations. .

According to CCTV News, the Chinese side said that today we leaders of 15 countries have jointly witnessed the signing of the Regional Comprehensive Economic Partnership Agreement (RCEP). As the world’s largest participating population, the most diverse member structure, and the greatest development potential The free trade zone is not only a landmark achievement of East Asian regional cooperation, but also a victory of multilateralism and free trade. It will definitely add new momentum to the promotion of regional development and prosperity and contribute to the recovery of the world economy. strength. Under the current international situation, the RCEP was signed after 8 years of negotiations, allowing people to see light and hope in the gloom, showing that multilateralism and free trade are the road and the right way, and still represent the right direction for the world economy and mankind.

Population, GDP, export volume, and foreign investment attraction all account for about 30% of the global total p>

RCEP negotiations were initiated by 10 ASEAN countries in 2012, and 6 countries including Australia, China, India, Japan, South Korea, and New Zealand were invited to participate. The goal is to sign the "10+1" free trade agreements with these countries. On the basis of the agreement, it was further improved and a new large-scale free trade agreement was reached. The negotiations officially started in 2013. In November 2019, the third RCEP leaders' meeting was held in Bangkok, Thailand and issued a joint statement, announcing that 15 countries have concluded all textual negotiations and essentially all market access negotiations.

Judging from the data in 2018, the population, GDP, export value, and foreign investment attraction of the 15 RCEP member countries account for about 30% of the global total. It is the world’s largest population and the largest membership structure. , The free trade zone with the most development potential. Therefore, the signing of the RCEP agreement is considered to have important historical significance and influence, and has attracted much attention.

The content contained in the RCEP agreement is very extensive. According to the People's Daily client report, the agreement closely follows the development trend of global trade and incorporates many new forms of trade, e-commerce is one of them. In addition to e-commerce, the agreement also includes intellectual property rights, competition policy, government procurement, and small and medium-sized enterprises, which exceed the scope of WTO regulations.

RCEP will bring benefits to countries in the region, China, and the world

The market believes that RCEP represents a huge business opportunity for the entire Asia-Pacific region. One is that RCEP15 is a response to the existing "10+1"The collective upgrade of the free trade agreement. A unified rule system in the region will be formed, which will help solve the "spaghetti effect" in the current region. Prior to this, 10 ASEAN countries and 5 other countries signed agreements respectively. In so many agreements, the rules of origin, investment opening rules, and service trade rules are different, and they are wrapped together like "spaghetti". The second is to help the local region to form a supply chain and value chain based on comparative advantages, which will have great benefits for the flow of goods, technology, services, and capital in the region, including the cross-border flow of people, forming a "trade" Create" effect. Third, for investors outside the region, entering a country means entering the country in the entire region, and the market and space for development will greatly increase, which will help the region attract investment from outside the region.

However, there is still a lot of room for economic and trade cooperation between China and these countries. Taking ASEAN as an example, Cheng Shi, chief economist of ICBC International, believes that as China moves to the upper reaches of the global value chain, the relationship between China and ASEAN in the division of labor within the industry is expected to accelerate the shift from competition to cooperation. China provides ASEAN with key technologies, parts, equipment, and market demand. As a result, ASEAN will be able to give full play to its resource, labor and other factor endowments, and form a large-scale production advantage in the downstream links.

Liu Junhong, director of the Globalization Research Center of the China Institute of Modern International Relations, said in an interview with the media that the total trade volume between China, Japan and South Korea exceeded 500 billion US dollars, and the total trade volume between China and ASEAN also exceeded 500 billion US dollars. In total US trade, Australia and New Zealand are China’s main sources of energy, agricultural products. The member states of RCEP "cannot be less than one".

In the context of the new crown pneumonia epidemic, China’s opening up to the outside world remains strong Reversely increase, and continue to promote the signing of free trade agreements and regional trade agreements with businesses in many countries and regions.

Vice Minister of Commerce Qian Keming stated at the previous policy briefing that China will strive to complete the negotiations on the China-EU Investment Agreement, implement the China-EU Geographical Indication Agreement, promote institutional opening, and accelerate the formation of international investment and trade The basic institutional system and supervision model that are connected by rules.

Huang Qifan, vice chairman of the China Center for International Economic Exchanges, stated that the "Proposal of the Central Committee of the Communist Party of China on Formulating the Fourteenth Five-Year Plan for National Economic and Social Development and the Long-term Goals for 2035" pointed out that "freedom to implement The strategy of upgrading the trade zone and building a high-standard free trade zone network facing the world" is a major measure to actively respond to rule disputes and actively participate in international economic governance. This kind of improvement strategy adopted by China is to build rule-based trust by seeking common ground while reserving differences and seeking the greatest common divisor, thereby helping to build an open world economy.

Cheng Shi believes that the new round of globalization in the future will not be a simple repetition of the previous round, but will present a completely different new structure. The world is no longer flat, but has turned to a "multimodal structure" consisting of multiple regional communities, forming a nested system of intra-industry trade regionalization and inter-industry trade globalization. The development of regional economic integrationIt will lead globalization and become the pillar of the globalization system. Following this historical trend, North America and Europe have accelerated their regionalization construction. Among them, the United States announced its withdrawal from the TPP and signed a new tariff-free agreement between the United States, Mexico and Canada. The EU seized on the changes in the epidemic and used the EU Recovery Fund to further strengthen internal unity. Regarding this, Asian regionalization, as one of the three pillars of the future globalization system, is facing the huge challenge of not advancing or retreating.

Cheng Shi said that China's choice is not only related to its own opening up, but also related to the future of regionalization and globalization.

Li Keqiang: The signing of RCEP is a victory for multilateralism and free trade

According to Chinese government website, Premier Li Keqiang of the State Council attended the fourth "Regional Comprehensive Economic Partnership Agreement" (RCEP) Leaders’ Meeting on the morning of November 15th, and stated that today, leaders of our 15 countries jointly witnessed the Regional Comprehensive Economic Partnership Agreement (RCEP). ), as the free trade zone with the largest number of participants, the most diverse membership structure, and the greatest potential for development in the world, this is not only a landmark achievement of East Asian regional cooperation, but also a victory for multilateralism and free trade. It will add new momentum to the promotion of regional development and prosperity, and contribute new forces to the recovery of the world economy.

Li Keqiang pointed out that under the current international situation, the RCEP was signed after 8 years of negotiations, allowing people to see light and hope in the gloom, showing that multilateralism and free trade are the road and the right way, and still represent the world economy. And the right direction for humanity. Let people choose unity and cooperation in the face of challenges, rather than conflict and confrontation, and choose to help each other and help each other in the same boat, rather than beggar neighbors and watch fire from across the bank, and show the world that open cooperation is the only way to achieve mutual benefit and win-win for all countries. The road ahead is always uneven. As long as we strengthen our confidence and work together, we will be able to create a better future for East Asia and even mankind.