The 21 accounts of the "National Team" have a market value of 4 trillion, let's see through its latest positions

1. The industry configuration is concentrated in the big finance, accounting for 83.4%

Industry configuration ratio From a point of view, the holdings of the "national team" are mainly concentrated in the large financial industry, with banks holding the largest share of stock market value, followed by insurance and brokerage firms, accounting for 76.36%, 3.69%, and 3.30%, respectively. 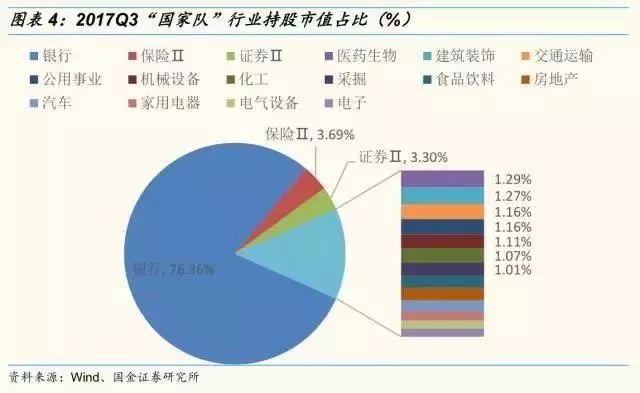 The distribution of the market value of the holding companies of the "National Team" is mainly concentrated in "5-10 billion, 10-20 billion."

The national team favors companies with low valuations whose PE is less than 30 times.

Fourth, the third quarter investment situation of the four major entities of "state to" 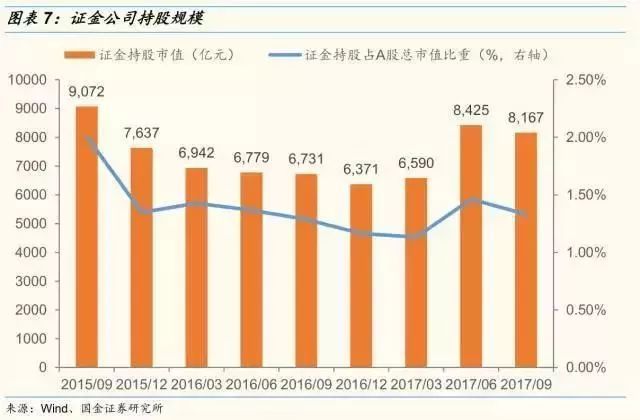 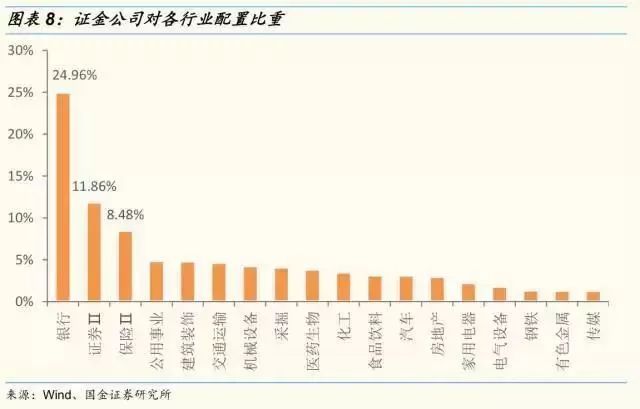 Among them, the cycle, TMT and food and beverage are reduced. The specific reductions (including the withdrawal of the top ten shareholders) of the stocks are as follows: 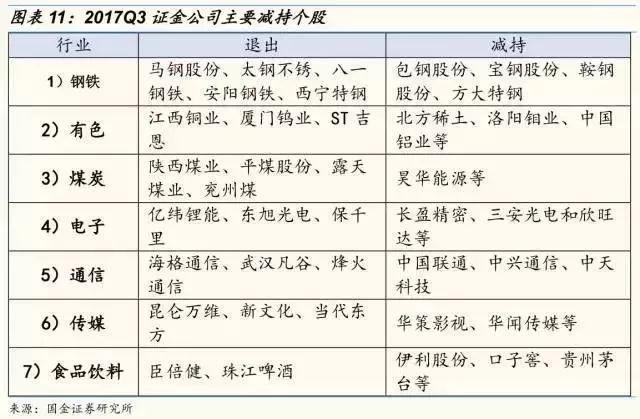 See all increases and decreases in detail Holding situation, In the third quarter, the securities companies continued to increase their holdings in 73 companies. The top 20 companies are ranked according to the percentage of increase in holdings: 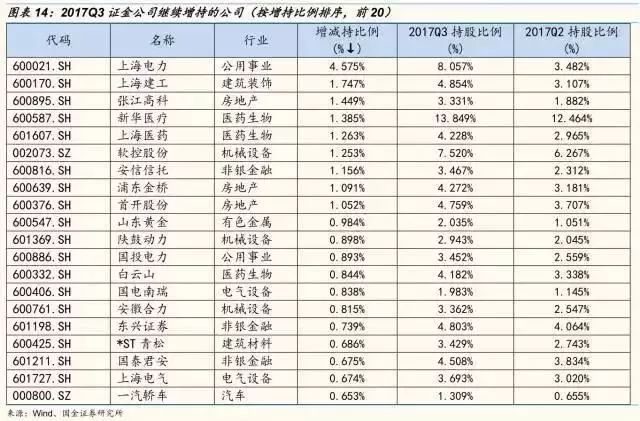 112 companies have reduced their holdings, sorted by the reduction ratio, the top 20 companies are: 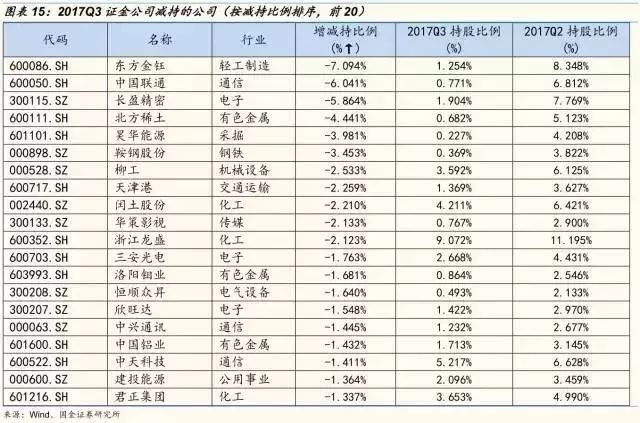 Those who have withdrawn from 65 companies are among the major shareholders, ranked in the top 20 according to the shareholding ratio of the previous period The company is: 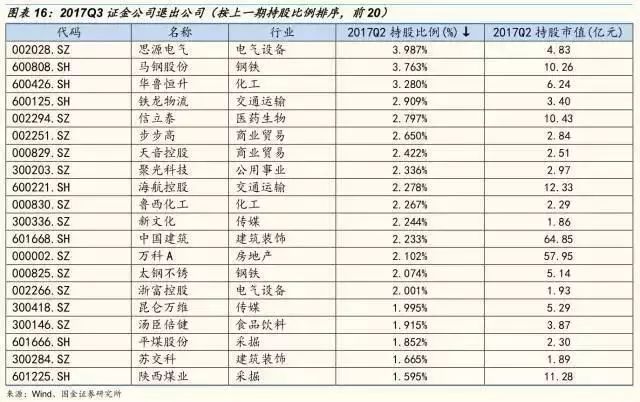 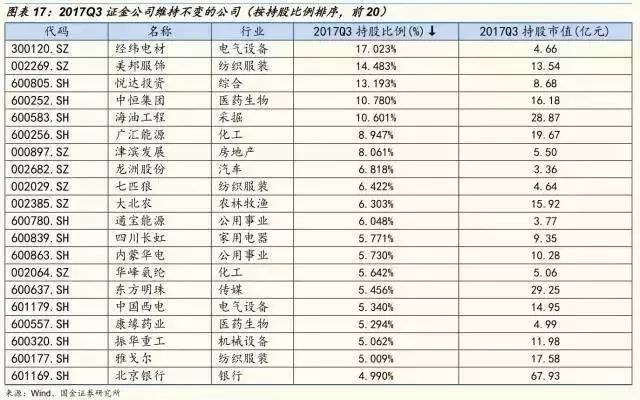 After "increasing and reducing holdings", the companies with a large shareholding ratio in 2017Q3 are: 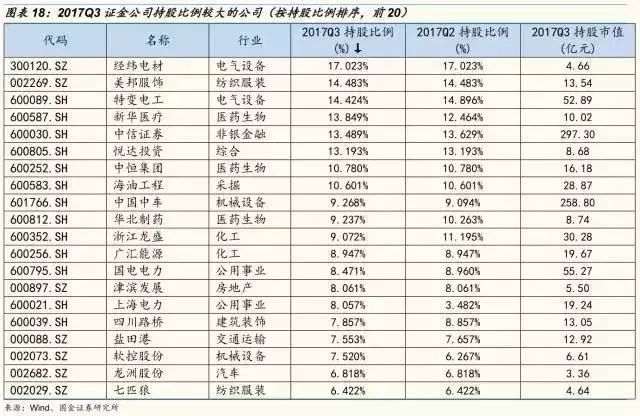 As of the end of the third quarter, Huijin Company held 994 companies, holding stock market value Reached 3.49 trillion, accounting for 5.69% of the total market capitalization of A shares (5.44% and 5.19% in the first two quarters), a slight increase for three consecutive quarters. 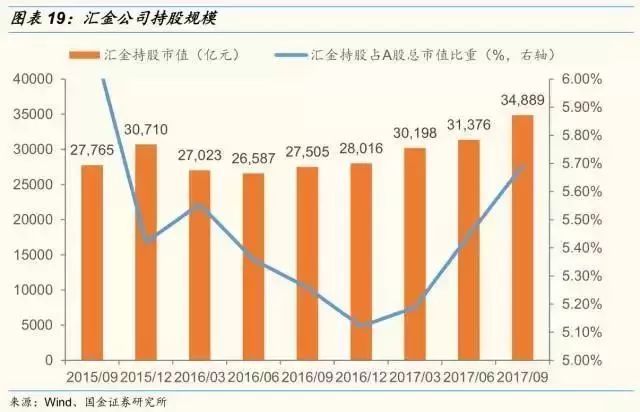 From the perspective of industry allocation structure, Huijin holds 88.6% of the market value of banks, and holds 2.6% and 1.4% of the market value of insurance and securities respectively. Huijin holds such a large share of the financial industry, which is related to the company's positioning. As a wholly state-owned company that represents the country to exercise investor rights and perform investor obligations to key financial enterprises, Huijin is a financial institution such as the four major state-owned banks. Original shareholders. 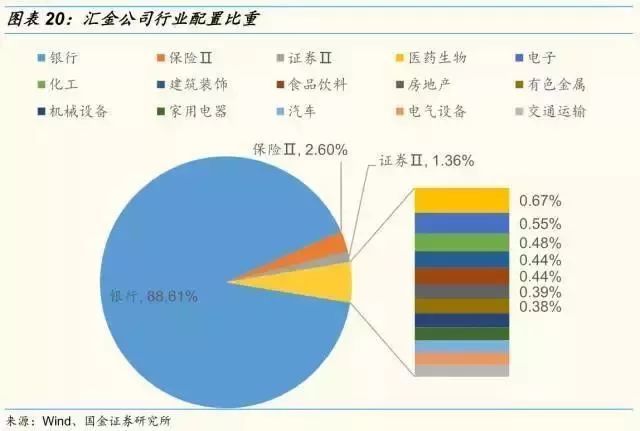 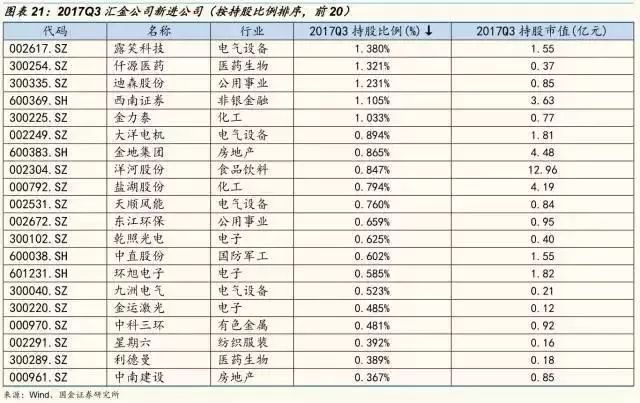 2017Q3 Huijin continued to increase Only Luxshare Precision is the holding company.

Changchun High-tech and Guangdong Hongtu will be the companies that will reduce their holdings.

Those who have withdrawn from 44 companies are among the major shareholders, according to the previous period’s shareholding In order of proportion, the top 20 companies are: 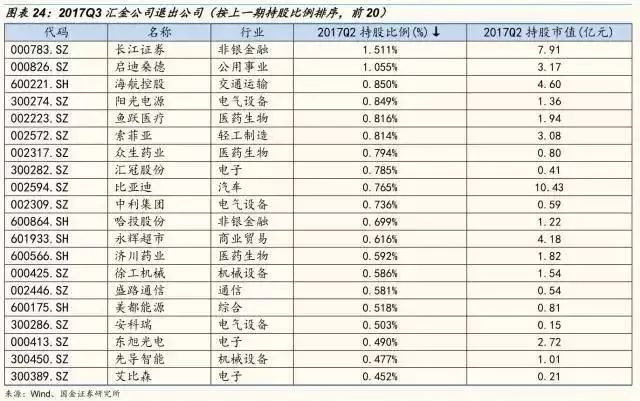 Companies holding the same shares There are 957 companies, sorted by shareholding ratio, and the top 20 companies are: 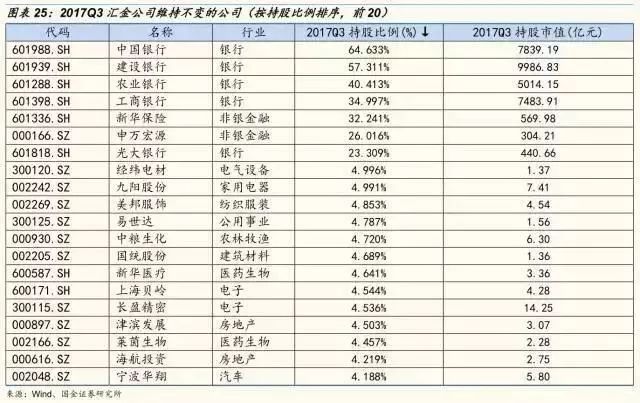 Therefore, after “increasing and reducing holdings”, the companies with a large shareholding ratio of Huijin in 2017Q3 are: 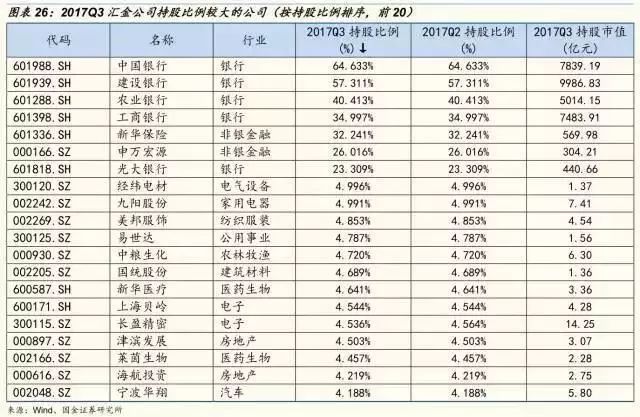 Specifically, among the 5 funds, in descending order of holding stock market value:

Among the 5 funds, China New Economy has the highest position (56.83%), Harvest The positions of New Opportunities and Southern Consumer Vitality came in second (36.8% and 32.3% respectively), and E Fund Ruihui and China Merchants Fengqing had the lowest positions (13.9% and 13.3% respectively). Compared with the previous quarter, the positions of China New Economy, Harvest New Opportunities, Southern Consumer Vitality, E Fund Ruihui and China Merchants Fengqing decreased by 15.7%, 16.8%, 12.0%, 7.4%, and 4.8%, respectively. 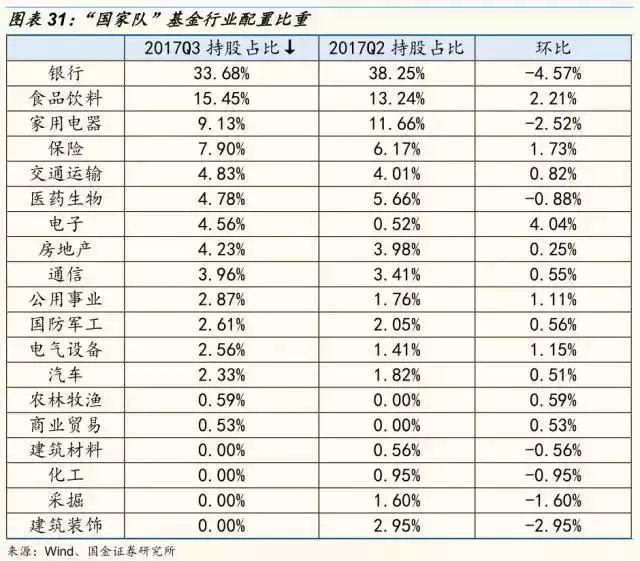 Looking at individual stocks, the 39 heavily held stocks of the "National Team" Fund are shown in the following table. From the perspective of position changes, the "national team" fund lightening is more obvious. 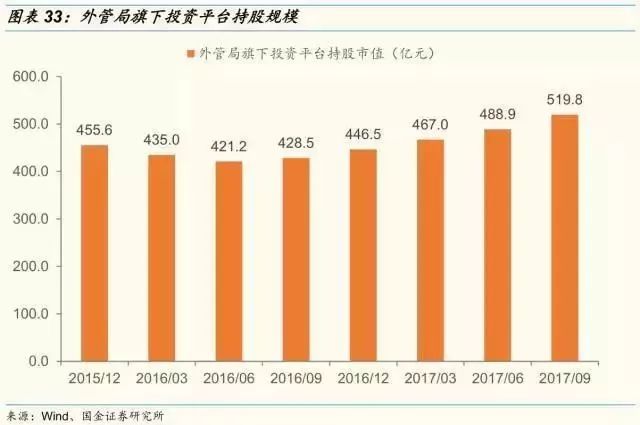 The industry configuration is concentrated in banks, accounting for 87.9%

At the end of the third quarter, the top ten shareholders of the three new companies, sorted by shareholding ratio, are: Tianjin Hong Kong, China State Construction and Shanghai Petrochemical.

The only company that continues to increase its holdings is Jiangxi Copper.

Among the top ten shareholders who have withdrawn from three companies: p>

There are 14 remaining unchanged:

Therefore, after "increasing and reducing holdings", the 18 companies with a large shareholding ratio in the investment platforms of SAFE in 2017Q3 are: span> 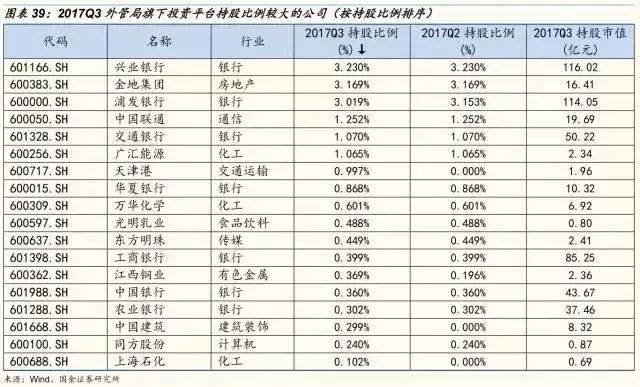 Everyone makes money, just wait for you to see

1 Are you willing to manipulate the wine industry illegally? Private equity big V made a real-name report to the China Securities Regulatory Commission, the evidence is based on the stock pric
2 The Securities Regulatory Commission responded to the Deloitte Accounting Firm incident: verification of the reported matter has been carried out
3 IPO Weekly Report: Since November, 100% meeting rate! The IPO pre-disclosure column is rarely updated! _ Enterprise
4 Heavy! The first batch of 9 sci-tech innovation board accepting companies released_listed
5 In 2018, the tax bureau focused on the inspection of private accounts for "tax avoidance". Even if it is seamless, it will not escape the "eyes" of big data.
6 Dark Pool Trading under U.S. Securities Regulatory Rules
7 The status quo of securities brokers in wealth management transformation | securities industry experts _ industry
8 Brokers, brokerage firms, the twilight of the era of major brokerage business _ Securities
9 There is no easy word for a successful trader. Behind every glorious one is the ability to suffer like a phoenix nirvana _
10 Why build a trading platform for Hong Kong and US stocks?