The increase in the account of 100 million yuan is the big money to buy the bottom of A shares? Got it wrong!

Release Time:2021-07-22 Topic:A-share account with 100 million yuan Reading：10 Navigation：Stock Liao information > Finance > Investment > The increase in the account of 100 million yuan is the big money to buy the bottom of A shares? Got it wrong! phone-reading

Original title: The increase in a billion yuan account is a big money bargaining for A shares? Got it wrong!

On the whole, in 2016, the stock market was in a recession, and more and more investors chose to wait and see. According to the data previously released by China Clearing, the number of investors holding positions at the end of the period was 49,936,100, which has fallen below 50 million! The bull and bear trading room looked through the data and found that the last time the data climbed to 50 million was going back to June 2015. This is the first time that the number of investors holding shares has fallen below this threshold in the past 20 months. 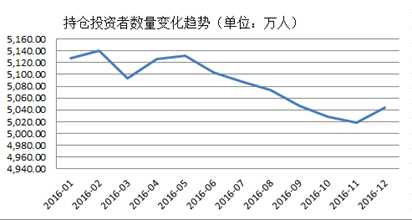 Figure 1 Recent changes in the number of investors holding positions 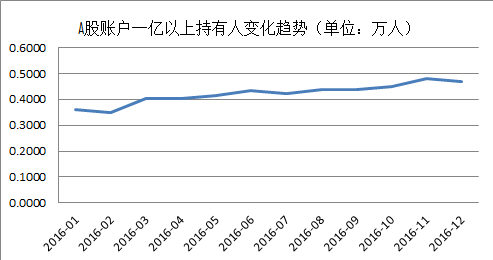 Some research institutions pointed out that this is related to offline new creation and big fund hunting. Bull bear trading room as a focus Institutions that study investor behavior have their own views on this: offline launching is a factor, not a major factor. The main reason is that IPOs have accelerated since the third quarter of 2016, and many original shareholder billionaires have emerged.

Fusenmei is a typical family business. The controlling shareholder and actual controller are Liu Bing. Liu Yunhua, Liu Bing's sister, serves as the vice chairman of the company. He holds 121.9968 million shares of listed companies, accounting for 27.72%. As of today, his net worth is about 7.2 billion yuan. Liu Yi, the brother of Liu Bing, serves as the company's director and general manager. As of today, he has a net worth of 2.247 billion yuan.

Many institutions believe that A shares fell from 5178 points to 3000 points the year before, a drop of more than 40%. Under this circumstance, the number of 100 million yuan accounts is still increasing, and it exceeds the peak of the bull market because Institutions and big players have begun to enter the market one after another. However, combined with the acceleration of IPO audits in the latter part of last year, the increase in billion-dollar accounts is not actually a bottom-hunting by large investors, but from the book value of industrial capital shareholders or executives after the IPO.