Nearly half of 2019 has passed. China's A-share market was affected by technology, policy, foreign trade and many other factors, and the market in the first half of the year experienced twists and turns. In this context, the "A-share Stockholders Confidence Index for the First Half of 2019" report jointly produced by Netease Finance and Jufeng Investment Advisory was officially released to provide investors and institutions with investment decision-making reference. The A-share Stockholders Confidence Index is a combination of the three data of investors’ long-term outlook on A-shares, short-term trends, and future investment adjustment plans. Finally, a comprehensive quantitative model of the stockholders’ confidence index is obtained to reflect the confidence of shareholders more vividly. Changes.

In the context of hard work in China's capital market and greater reform and opening up, investor returns in the first May of 2019 have improved compared to last year, and 26.19% of people have expressed profits. However, judging from the fluctuation curve of the A-share stockholders’ confidence index, it remains slightly pessimistic in the short term, but nearly 54% of investors are still optimistic about the market outlook. It is generally believed that the stock market has entered the early stage or even the middle of the bull market, and more than one-third of the stockholders expressed their intention to continue. Add positions.

The new characteristics of A-share investors in the first half of 2019: the increase in female investors; mainly young and middle-aged groups aged 25-44. The survey report shows that the proportion of women among shareholders has risen from less than 20% last year to nearly 30%; mainly young and middle-aged groups, with about 61% between 25-44 years old; for high positions, most investors are professionals in the field; high Income, monthly income of more than 50%; high education, more than 70% of people have a college degree or above.

1. How about investors' confidence in China's stock market? 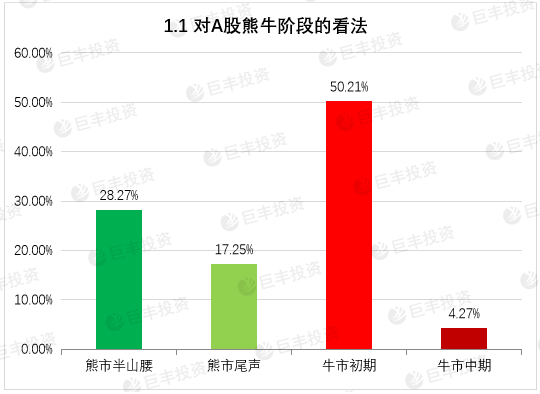 In the A-share survey on long-term trends, up to 50.21% of investors believe that they are in At the beginning of the bull market; 4.27% of people think that A shares are already in the middle of the bull market; the remaining 45.52% said that A shares are still in the bear market stage, and 28.27% of them believe that there is a downward trend in the future. 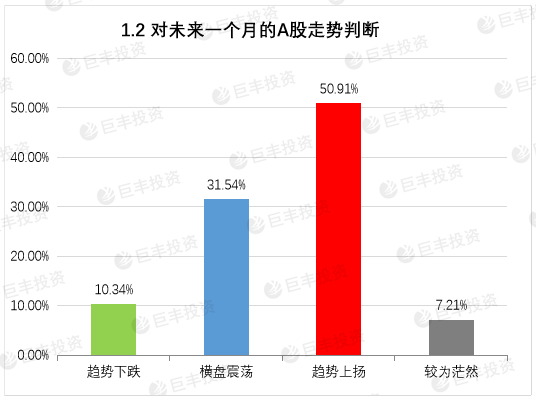 In judging the short-term trend of the stock market, except for 31.54% of people who choose to continue to fluctuate sideways, they believe that A shares The proportion of investors who will trend upward (50.91%) is significantly higher than those who hold the view of downward trend (10.34%), which shows that investors as a whole are more optimistic about the direction of the stock market.

Regarding future securities investment plans, the proportion of investors who indicated that no adjustments will be made for the time being is the highest (44.19%), and among the remaining , There are slightly more people planning to increase investment (34.74%) than reducing investment (21.07%). However, the majority of those who made additional investment adjusted within 30%, and those who planned to reduce investment by more than 30% accounted for the majority, so the two sides were basically the same. 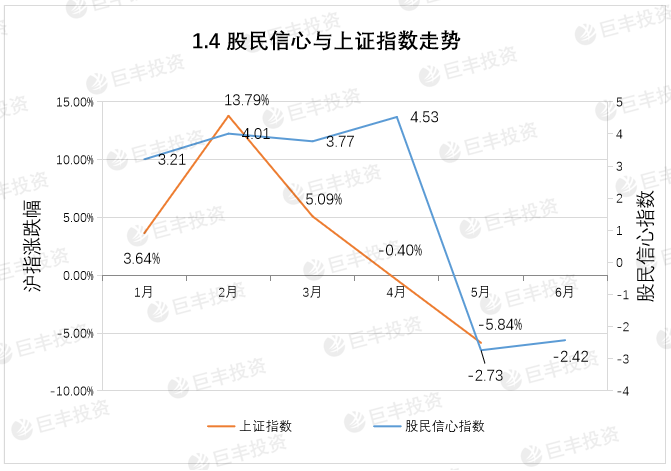 It can be seen that investors have maintained a relatively positive attitude towards the trend of A-shares from January to April, but their expectations for May-June have rapidly turned pessimistic, but their investment confidence in June Some recovery. Comparing with the Shanghai Composite Index, it can be found that the change in investor confidence in May was caused by the stock market’s change from rising to falling in April. As the Shanghai Composite Index fell in May, the adjustment was not very large. In June, the Shanghai Composite Index fluctuated sideways, and investor sentiment was gradually restored. , Or affected by multiple factors such as the "five poor and six must-have" curse and poor foreign trade environment, the current investor confidence remainsKeep slightly pessimistic (confidence index is -2.42).

2. What was the investor's return on investment in the first May of 2019?

Among the people surveyed, investments that lost more than 30% from January to May 2019 The number of investors is as high as 24.94%, the loss is between 30%-10% and 27.90%, and the number of loss-making investors is as high as 73.8%. Among the remaining 26.2% profitable people, those with a profit of less than 10% also account for the vast majority. It can be seen that the income situation of the A-share market is still not optimistic this year.

3. Investors' views on major events in the internationalization of A shares 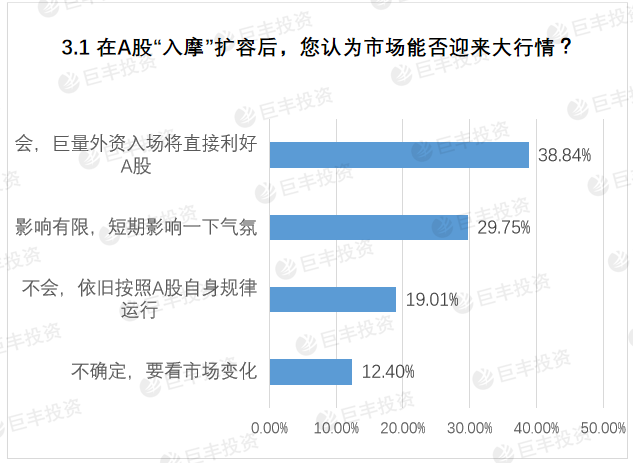 On May 14, the weight of A-shares included in MSCI doubled as planned. Investors think whether the market will usher in a big market?

According to a survey by Jufeng Investment Consultants, only 38.84% of investors believe that the expansion of the “Money” expansion will introduce a huge amount of capital, which is good for A shares. Jufeng Investment Advisor's analysis pointed out that after the expansion of the A-share "investment" ratio, the A-share window for foreign investment will open again, which will have a positive impact on the market. It not only helps stabilize market sentiment, but also helps boost market confidence. In the long run, more integration with international standards is also conducive to the gradual maturity of the market. 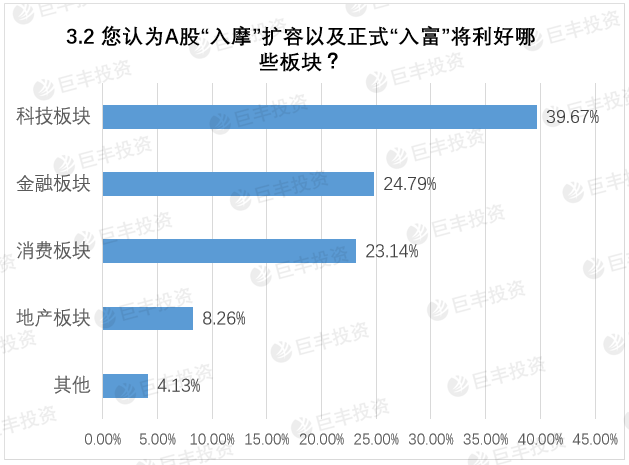 According to a survey by Jufeng Investment Consultants, 39.67% of investors believe that the technology sector is the first to be good, followed by the financial sector (24.79%), the consumer sector (23.14%), and the real estate sector (8.26%).

4. Investors' views on hot topics related to the Sci-tech Innovation Board 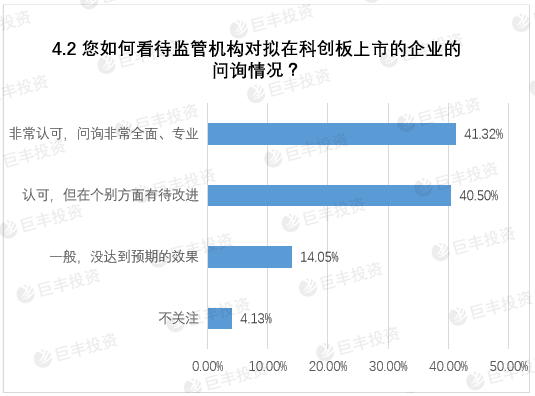 In accordance with the requirements of the sci-tech innovation board pilot registration system reform, the Shanghai Stock Exchange will inquire about companies applying for listed companies. How do investors view supervision? How about the institution's inquiries about companies that plan to list on the Science and Technology Innovation Board?

According to a survey by Jufeng Investment Consultants, 81.82% of investors indicated that they recognized the inquiries of regulatory agencies on companies that are to be listed on the Science and Technology Innovation Board. 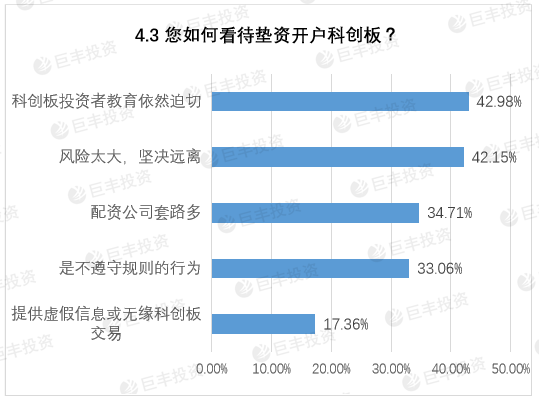 Because the sci-tech innovation board has set up a "threshold" for individual investors to enter the market, some investors who "do not meet the standard" take advance funds The way to open an account is to participate in the Sci-tech Innovation Board, what do investors think about it?

According to a survey by Jufeng Investment Consultants, 42.98% of investors indicated that they would strengthen investor education, and even 17.36% of investors believed that this was an act of providing false information and that they should not be allowed to participate in science and technology innovation. Board transactions. 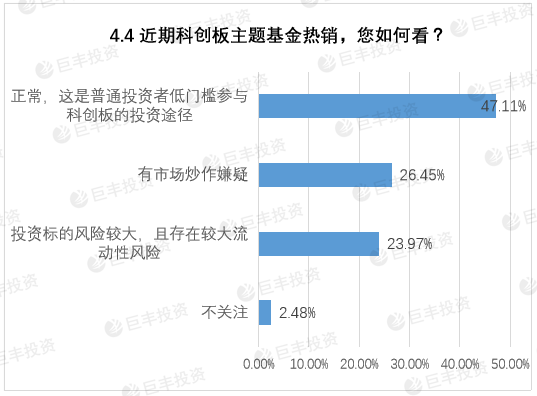 Recently, the science and technology innovation board theme fund is selling well. How do investors think?

According to a survey by Jufeng Investment Consultants, investor comments are generally more rational. 50.42% of investors have a strong sense of risk and participate cautiously; about 47% of investors say that the science and technology innovation board themed fund is It is normal for ordinary investors to participate in the Sci-tech Innovation Board with a low threshold, and it is normal for funds to sell well.

5. What is the ratio of male to female investors? 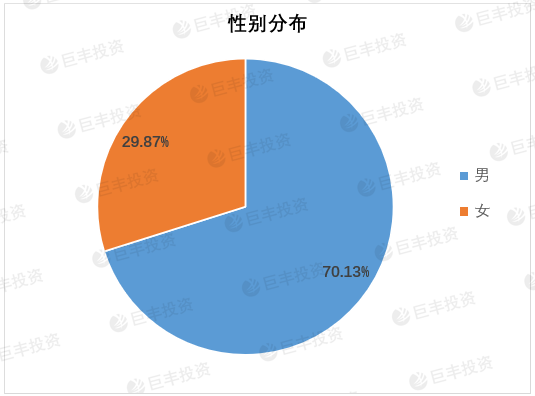 According to the investor survey data of Jufeng Investment Gu from January to May 2019: my country is committed to Investors in the A-share market are dominated by men, accounting for 70.13% of the total, while female investors have accounted for 29.87%.

6. Which occupations are investors mainly engaged in?

Occupation distribution: employees of enterprises (institutions), leaders of enterprises (institutions) and public officials are ranked first and second respectively , Four, the total proportion of the three investors is 69.4%; the number of freelance jobs ranks third, at 9.39%; other occupations with a large distribution of investors include education, medical, cultural and sports workers (6.54%) and workers (5.75%). In addition, the least number are laid-off personnel, military personnel and school students.

In general, stock market investors are people with stable and higher incomes.

7. What is the age distribution of investors?

8. What is the investor’s educational background?

According to the 2018 survey, the proportions of undergraduate and graduate students are 30.85% and 5.48%, respectively. From this comparison, it is found that the proportion of highly educated investors has increased significantly since 2019.

9. What is the investor’s household income?

According to the survey in 2018, compared with 19.79% of the number of people under 5000, the proportion of low-income investors has decreased significantly.

10. Are there many old investors or new investors?

Compared with last year’s survey results, the proportion of investors with 10 years of experience and above (39.27%) has decreased significantly, but there are still relatively few new market entrants, indicating that investors participating in the market are still Mainly old investors.

1 [Reprint] Interactive Brokers Account Management (Part 2) _ jerry _ vista _ Sina Blog
2 A prospective daughter-in-law fooled her father-in-law to buy millions in wealth management, and an employee of China Merchants Bank was banned for life
3 The latest Bank of China deposit Tiger Securities in 2020, the whole process of winning the lottery for the new ideal car
4 The central bank issued a huge fine for anti-money laundering! Shenwan Hongyuan and Huatai Securities repeatedly hit the red line _ identity
5 More than 500 fines were issued to the banking industry in 2017, so high-priced fines were issued to Minsheng Bank
6 Breakthrough, an important signal appears on the ChiNext! _ Index
7 coming! The GEM registration system has officially kicked off. Who will be the biggest winner? List of individual stocks
8 List of domestic chip concept stocks with a market value of less than 5 billion on the GEM (22 stocks)
9 The GEM registration system is here! Who is the biggest winner? List of individual stocks
10 Just now, the MSCI expansion list was announced! The inclusion of these GEM targets! _ Index