In order to review the changes in the A-share market in 2019 more comprehensively, based on the market data of the past year, Databao Jointly released with Flush Shun the "A Stock Market Value Growth Ranking List" shows that

Looking at the opposite direction, only PetroChina was the only stock whose value in the A stock market shrank by more than 100 billion during the year. The stock price fell by 17.04% during the year and its market value shrank by 223.452 billion yuan. . The stock market value of CRRC, *ST Xinwei, SAIC, ST Kangmei, and China Communications Construction has shrunk by more than 10 billion yuan.

Technology stocks are the most eye-catching

In the past 2019, which big bull stocks have been born in the A-share market? As of the latest close, the electronics sector, which performed the worst last year, has completed a counterattack this year. The industry index has risen by 73.77%, ranking first in the industry sector increase list! Followed by sectors such as food and beverage, household appliances, architectural decoration, and computers. Excluding the new stocks listed this year,

A-shares have experienced an average increase of 26.41% this year, and 206 shares have doubled during the year.

According to the data,

Wanji Technology, ArcherMind Technology, and China Diving are among the top three A-share annual gainers, and Wanji Technology has a cumulative increase of 4.86 For the first time, Times won the A-share annual increase list champion. Benefiting from the government’s continued active promotion of the procurement and construction of ETC, Wanji Technology has achieved explosive growth this year. In the first three quarters, it achieved a profit of 129 million yuan, a year-on-year increase of more than 9 times. The company's annual performance can expect high growth. Under the vigorous promotion of the policy, including Wanji Technology, companies related to the ETC concept, such as Jinyi Technology, Broadcom Integration, and Huaming Intelligent, have achieved significant benefits during the year.

In the list of declines during the year, the performance is worrying and the explosive stocks have gathered together. The data shows that the stock prices of 26 shares fell in the middle of the year. *ST Xinwei, *ST Qiulin, and Derivative Technology ranked the top three in the annual decline list of A-shares. Among them, *ST Xinwei had a cumulative decline of 79.03%, becoming the worst performing stock for the year. *ST Xinwei's net profit loss in the first three quarters was 15.858 billion yuan, becoming the A-share loss king during the same period.

2 The overall A-share turnover in 019 has increased significantly compared with last year, with an average daily turnover of 514.1 billion yuan, an increase of 40% over last year.

The average amplitude of individual stocks hit a four-year high

With the subject matter hype, relative to the broader market, the fluctuation of individual stocks is more obvious.

Data treasure statistics show that this year's Shanghai Stock Index has an amplitude of 33.98%, which is basically the same as last year, while the average amplitude of individual stocks reached 83.61%, a four-year high.

ArcherMind Technology, Meijin Energy, Edifier, Wanji Technology, and Shunhao are among the top five in the 2019 A-share amplitude list , ArcherMind’s amplitude this year is 593.88%, ranking first in the A-share amplitude list! ArcherMind Technology is also the subject of popular technology such as Huawei concept, Xiaomi concept, chip, operating system and so on. On December 19, the stock hit a record high in intraday trading, and its latest share price has already advanced to the ranks of 100-yuan stocks. 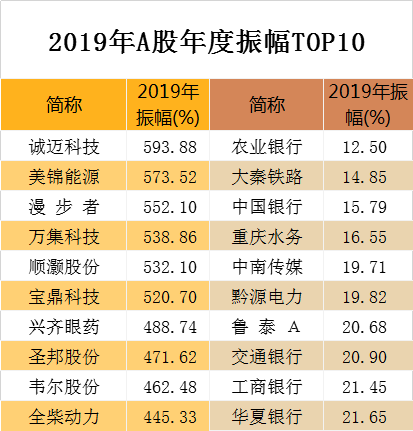 Institutions are determined to see more in 2020

Coming in 2020 On the occasion of the arrival, the new securities law was officially released recently. The strategy team of CITIC Construction Investment stated that this revision of the Securities Law has promoted the registration system and strengthened information disclosure and investor protection, which has laid a milestone for the progress of China's capital market. It is expected that the registration system for the GEM and the Main Board in 2020 will begin quickly after the Spring Festival. In addition, the reference benchmark for stock loan interest rates will be changed, which means that the LPR pegged to the MLF will play a role in pricing. From a long-term perspective, the LPR interest rate drop will further drop, pushing the financing cost of the whole society down, which is very conducive to economic recovery.

For the upcoming 2020, most institutions hold a relatively optimistic attitude. In terms of allocation, brokerages are generally optimistic about the technology and brokerage sectors. At the same time, the reform of the capital market has also injected more confidence into the market. Analysts expect that the GEM registration system, refinancing, shareholding reduction, information disclosure, opening up, listing/delisting and other systems will be matured and launched one by one in 2020. More intensive landing in half a year.

The time window of 5G construction and application and the wave of localization substitution under Sino-US friction, jointly driving the take-off of technology and innovation industries, The performance of the big innovation sector is expected to continue to be released, and we are optimistic about the subdivision of the import substitution and 5G-related industrial chain.

"technology + brokerage" is expected to become the leading industry in this round. The reason is that my country has entered the post-industrial era and entered the information era. The key development industry is the technology industry, and the securities firms that provide financing services for the technology industry. In the context of financial supply-side reforms, regulatory authorities encourage banks to increase theirThe support of financing, the issuance of financial bonds by securities firms, and the increase in short-term financing are all conducive to reducing capital costs and increasing leverage.

Soochow Securities stated that the new securities law will cause high-priced stocks and shell resource stocks to fluctuate in the short-term, and will guide funds to concentrate on high-quality targets with sound fundamentals in the long-term. At the same time, a large number of new stocks will enter the market and increase the stock price. The performance of securities firms, in addition, the full implementation of the registration system will promote the transformation of securities firms into "comprehensive financial services", and put forward higher requirements on the pricing and research capabilities of securities firms, and the leading advantages are relatively prominent.

The securities industry is in an era of very obvious changes, and the leading advantages of leading brokerage firms will become more obvious, and policy dividends will continue to be released, which will obviously catalyze the valuation of brokerage firms.