Release Time:2021-07-21 Topic:A share trading uniform Reading：7 Navigation：Stock Liao information > Comprehensive > Private equity tycoon Xu Xiang from the beginning: he entered the market at the age of 17 and traded for the gang at the age of 19 phone-reading 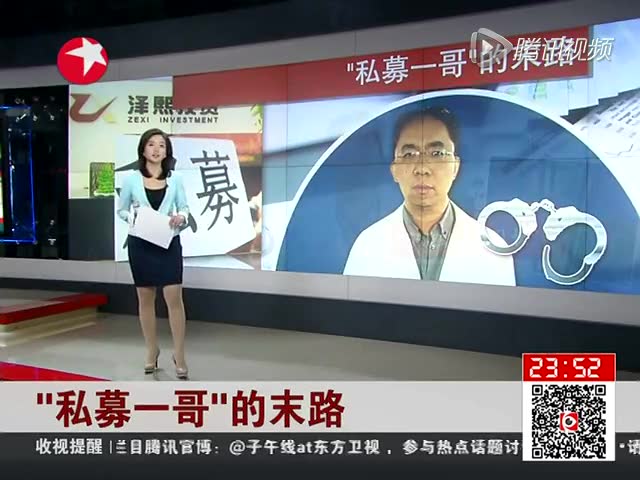 At 23:52:01 on November 1st, a 100-character news from Xinhua News Agency awakened the investment circle. The legal representative and general manager of Zexi Company Xu Xiang and others obtained insider information on the stock market through illegal means, engaged in insider trading, Manipulation of stock trading prices, his behavior is suspected of illegal crimes, recently by the public security organs to take criminal coercive measures according to law.

Xu Xiang, who is a master of the capital market, has always been mysterious and low-key, but he has been handcuffed when he first appeared in public view.

Yesterday afternoon, Beijing Youth A reporter from the newspaper came to the Zexi office on the 5th floor of Yinglan Building on Financial Street. The property staff was covering the glass door of the company office with shading stickers. Two security guards stood at the elevator entrance and asked one by one the purpose of the personnel approaching Zexi's office. The reporter found that the sign at the elevator entrance had removed the column "501-505, 531-532 Zexi Investment Management Co., Ltd. Beijing Branch".

An employee of a securities company on the same floor as Zexi said that Zexi had closed its doors since the morning, and several investors came to check in the morning and left immediately after finding that it had closed. He said that Zexi usually has fewer people, "I don't see people over there very often."

A cleaner revealed to reporters that three people wearing "secret service" uniforms are still in Zexi's company. She said that the door of Zexi Company is usually locked from the outside, but now the door is locked from the inside.

Just as the reporter of Beijing Youth Daily was talking with the cleaning staff, a courier went to Zexi’s office to deliver two couriers, and several voices replied, "Call them directly, I can’t accept them here." . The courier told reporters: "Usually people from the company go downstairs to pick them up. When they called today, they said they were not in the office and let them be at the front desk." A property staff member revealed that Xu Xiang usually I work here, in Beijing from Monday to Friday, and return to Shanghai on Friday night. It is understood that Zexi has more than 20 people in the Beijing branch. Xu Xiang started to work here in November last year.

On November 1, Xu Xiang, the legal representative and general manager of Zexi Investment Management Co., Ltd., was taken away by the police.

Regarding the details of Xu Xiang being taken away, one of the versions is: November 1 is the 100th birthday of Xu Xiang's grandma. Xu Xiang, who was supposed to attend the grandma's birthday banquet in Ningbo, has never appeared. According to sources, Xu Xiang was controlled by the police on the Hangzhou Bay Cross-sea Bridge that morning and taken away from the Andong exit of Hangzhou Bay Expressway of Shenhai Expressway. It is also understood that Zhou Jianming, Xu Xiang's long-time friend and partner, has also been taken away.

The news that Xu Xiang was taken away spread a few hours later. HaveThe media called several high-level people in Zexi Investment. Some people turned off their phones and some couldn't answer them. At the same time, people in the Shanghai area confirmed that at present, many senior executives of Zexi Investment in Shanghai have lost contact.

At 23:52:01 on November 1st, a 132-word news from Xinhua News Agency confirmed that the legal representative and general manager of Zexi Company Xu Xiang and others obtained insider information on the stock market through illegal means and engaged in insider trading. , Manipulating stock trading prices, his behavior is suspected of illegal crimes, recently by the public security organs to take criminal coercive measures in accordance with the law.

Yesterday, someone impersonating Xinhua News Agency and Xinhua News Agency reporters posted a message on the Internet saying: "Further investigation by the Ministry of Public Security, Xu Xiang criminal group was detained on suspicion of insider trading and other crimes. Wu Shuang, a member of his criminal group Attempting to resist and escape, was shot by the police on the spot." After verification, this news is purely a rumor. Xinhua News Agency has reported the relevant situation to the public security organs and requested that the fabricators of the rumors be held accountable in accordance with the law.

Although famous In the A-share market, Xu Xiang rarely accepts interviews and is not allowed to take pictures. Even his true age is unknown.

According to market rumors, Xu Xiang was born in 1976. At the age of 17, he brought 30,000 yuan to the market. At the age of 19, he was said to have been coerced by the Shanghai gang to act for the gang. In the late 1990s, he became the "general rudder of the Zhejiang Death Squad". the Lord". Xu Xiang did not want to reveal his true age, only that he had an ID card when he was trading stocks in Ningbo in 1993, and he claimed to be a native of Ningbo.

In 2005, Xu Xiang moved from Ningbo to Shanghai and established Shanghai Zexi Investment Management Co., Ltd. on December 7, 2009, with a paid-in capital of 30 million yuan.

The first phase of Zexi’s product, Zexi Ruijin No. 1, was established in March 2010 with an initial scale of 1 billion yuan. At the beginning of its establishment, the product caught up with the sharp decline in the A-share market, but the net value of the product bucked the market trend and outperformed the market by nearly 50% in two months. Zexi Investment became famous as a capitalist.

Zexi Investment currently manages more than 5 billion yuan in assets and is one of the largest sunshine private equity fund companies in China. The company has 3 investment research managers and more than 30 industry researchers. Xu Xiang has always been regarded as a god-level figure, and his personal assets are thought to have reached 4 billion yuan.

Never attend any public The forums and conferences in China rarely go to listed companies for research, but they have achieved impressive results. The market is full of curiosity about Xu Xiang.

Xu Xiang said that this is just a personal character. "I am not very good at speaking in public, so I try to avoid attending such occasions. At present, the company's investment decisions are mainly made by me. The daily work is very busy and there is basically no time to investigate. But we have a relatively mature research team , More than 30 researchers, covering a lot of industries. They are very hard, they have to fly around, my investment decision mainly depends on their research results."

Analysts said that Zexi Investment in recent years There are four main ways to play here: one is to find bargaining opportunities in the secondary market through events such as "black swan"; the other is to focus on restructuring or attaching hot topic concepts, such as betting on Wutong Communications and Dongfang Zirconium in advance. Third, actively participate in the fixed increase of listed companies. Last year, the high-profile subscription of Xinke Materials for the fixed increase is enough to show its determination to set foot in the primary and semi-market; fourth, it will increase its holdings of some small and medium-sized enterprises with a fragmented equity structure and mediocre qualifications. Market value companies, and then expressed shareholder appeals in a high-profile manner. The previously increased holdings of Huitian Thermal Power, Ningbo Thermal Power, Ningbo United and Qianyuan Power have all implemented high transmission transfer plans, and Gongda’s initiative is to allow them to enter the company's management.

Buying the bottom of Chongqing Beer is a classic case of Xu Xiang. At the end of 2011, Chongqing Beer’s key data on hepatitis B vaccine failed, and it is considered to be a long-term speculation of stocks based on the concept of developing hepatitis B vaccine. Since then, there have been 11 consecutive limits. Xu Xiang bargained for the first time at around RMB 24, and then Chongqing Beer continued to drop its limit. Xu Xiang once again bargained at around RMB 20 to buy 30 million shares. Since then, Chongqing Beer has risen all the way to 35Yuan, Xu Xiang made hundreds of millions of yuan in a month. "Others don't dare to bet as big as I do, because they don't have money." Xu Xiang downplayed this.

Xu Xiang's investment also revolves around private placement of concept stocks. The basic operation method is to buy before the announcement of private placement, and immediately throw it out when the news about the company's high-end issuance is released. An investment banker from a securities firm said that non-public offerings of listed companies will have policies to protect the interests of investors, and Gaosongzhuan is one of them. "These methods require negotiation, but none of them can be publicly put on the table."

Because of Xu Xiang and Zexi's "stable, accurate and ruthless" intervention timing and operation techniques, it is enviable, and all kinds of doubts follow. From 2011 to 2014, there have been at least 4 market rumors affecting Xu Xiang and Zexi Company, most of which were rumors that Zexi and even Xu Xiang were investigated by regulatory authorities.

At the end of May 2011, it was madly rumored that Xu Xiang was investigated by the regulatory authorities for manipulating the stock market. Affected by this, its heavy stocks all fell to varying degrees at that time. On June 2, 2011, Zexi Investment released a "Report to Investors" on its official website to clarify market rumors that were "investigated by regulatory authorities" and stated that everything is normal for the company.

In July 2012, Zhang Chao, the manager of the previous year’s private equity champion Zishi Phase I and chairman of Zishi Investment Company, was investigated for insider trading, and market rumors that the Zishi investigation also involved Xu Xiang. Zexi Investment subsequently denied it.

At the end of January 2014, some media said that the China Securities Regulatory Commission was investigating an unprecedented rat warehouse transaction involving people who are as famous as Wang Yawei, and the target was Zexi Investment and Xu Xiang. Later, the media learned from Zexi Investment that Xu Xiang went to work on the day, chatting with the researcher at noon, and asked the company's employees to refute rumors at night.

In the first week after the May 1st holiday in 2014, it is rumored that the regulatory authorities investigated Zexi Investment. The reason may be related to the trading of Zexi Phase 6 before the suspension of the Dongfang Zirconium assets reorganization. , But there is no follow up on this matter.

Since the beginning of this year, various rumors are still in hot pursuit. The most recent one appeared at the end of September. Zexi Investment publicly denied accusations that the company was short-selling, saying that it had never opened a stock index futures account. No stock index futures trading has been conducted. At the same time, the company's products do not have the function of margin financing and securities lending, and do not have any short-selling mechanism.

At the opening yesterday, the Kangqiang Electronics and the Huali Family Limits fell. Rheinland Sports and Daheng Technology, both of which are also "Xu Xiang concept stocks," closed down. Nanyang Technology fell 9.55% and Wenfeng shares fell 8.98%. In addition, Bunny and Pioneer New Materials, which have the concept of "Zexi" due to researcher Zexi's investigation, also saw their limits, while concept stocks such as Dongfang Jinyu, Dunan Environment, and Fuchun Communication fell to varying degrees.

Yesterday, many companies such as Tubao, Dunan Environment, Fuchun Communication, etc. clarified their relationship with Xu Xiang on the "Investor Relations Interactive Platform", saying that Xu Xiang and Zexi Investment did not hold Any shares in the company.