Chiang Kai-shek, who failed in stock trading: Lost to be cynical and sleepless at night _ Chen Guofu

In the next few days, Jiang Jieshi’s diary continued to record the Maoxin account, which shows that this matter has become Chiang’s The excitement center also shows his anxious and worrisome situation:

At that time, Jiang once stated that he was responsible for all the capital; but when the Maoxin Company was formed, the capital did not come from Jiang. According to Chen Guofu's recollection: Zhu Shoumei initially invested two thousand yuan in its establishment, and Chen Guofu borrowed one thousand taels of silver from Jin'an Bank. The total capital is no more than three thousand hundreds of dollars in cash.

After the opening of the new Maoxin, it was not smooth. It opened on the first day and lost more than 1,700 yuan. At the same time, Chiang Kai-shek commissioned Zhu Shoumei to purchase stocks, and the price suffered a lot. Zhu Yuan was a fellow of Chiang Kai-shek's Fenghua. He graduated from the Zhejiang Normal University and started business. His lack of experience caused him not to buy the stock when the price was low. When the price was high, he suddenly bought it. When Chiang Kai-shek learned of the news, he was extremely upset. The diary said: "Yiqing came to the house, and the handed-in stock rose to 42 yuan, which was very worrying. I went to Maoxin to visit Shoumei and learned that the stock was bought on behalf of the former, and the price was 42 yuan at the beginning. The unreliability of the business man is so sigh! Now Guofu approached, crying with tears, his love is pitiful, but he knows that his courage is very weak."

Chiang Kai-shek asked someone to buy it. He had already suffered a loss when he bought high-priced stocks. He did not expect that, a few days later, the price suddenly dropped. Chiang Kai-shek received a telegram from Chen Guofu in Fujian and learned the news. The diary said: "After receiving the call from Guofu, I learned that the stocks handed over fell horribly, and the loss reached more than 7,000 yuan. It is known that business is not easy to operate. However, most of the damage was caused by Guofu and Shoumei. The Xingxiang family said that I had no luck in May and June. Okay, it is very strange if it is true." Two days later, he remembered: "I received Guofu's letter, knowing that he was timid and suspicious, and could not preside over the business."

Chiang Kai-shek went to Fujian this time. This was originally the result of the persuasion of Sun Yat-sen, Liao Zhongkai, Hu Hanmin and others, with the purpose of assisting Chen Jiongming and Xu Chongzhi in handling military affairs. Chiang Kai-shek had an opinion on Chen Jiongming. After arriving in Fujian, he found that Chen and Xu were at odds, thinking that there was nothing to do, so he could leave Fujian and return to his hometown on August 5. In his hometown, he still misses the trading situation of the Shanghai Stock Exchange, thinks about countermeasures, and sends people to Shanghai to convey his opinions. After returning to Shanghai in the second half of the year, he visited the exchange in person. The dirty air and noisy voices made Chiang Kai-shek feel dizzy, and he couldn't help but sigh that the broker was uncomfortable. 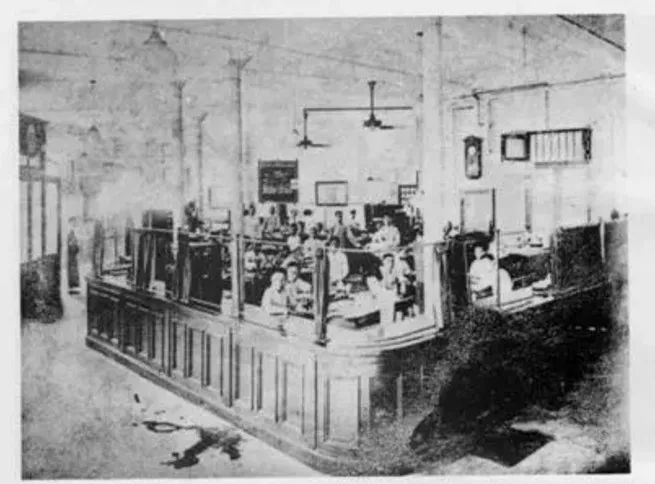 Maoxin’s business was unsatisfactory at the beginning, but it gradually thrived . Chen Guofu recalled: "Maoxin’s share capital increased from 10,000 yuan to 15,000 yuan, and slowly increased to 30,000 yuan. The daily expenditure is less than 30 yuan, and the daily business, at the worst time, commissions The total income is more than 30 yuan, preferably 2,000 yuan. The prosperity of the business can be imagined." It can be seen from this that Chen Guofu still has a set of methods in business. The portrait of Chen Guofu

The exchange has made a big profit, and Chiang Kai-shek’s joint venture Liyuanhao

As business conditions improve, Chiang Kai-shek once again "goes into the sea"

After the Shanghai Stock Exchange started business, it made a profit of more than 500,000 yuan within six months. As a result, various industries "like enthusiasm" and followed suit. The Shanghai Huashang Stock Exchange, the Flour Exchange, the Coarse Cereals, the Oil Cake Exchange, and the Huashang Cotton Exchange were established one after another. According to the investigation report of the "Shenzhen": "After the autumn of this year (1920), the exchange was at its peak.The glory. "By October 1921, there were more than 140 exchanges in Shanghai with a rated capital of 180 million yuan. 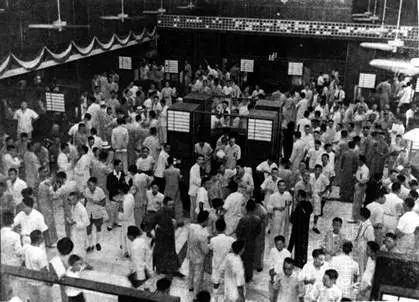 Shanghai Securities Trading scene on the opening day of the exchange

Zhang Jingjiang, Dai Jitao and others are naturally more excited at this time. On May 31, 1921, Zhang, Dai and Xu Ruilin and others signed a contract and decided to establish a joint venture to establish the Shanghai Stock Exchange Liyuanhao brokerage office. With Wu Meicen as the manager. The total capital of the firm is 30,000 yuan, 1,000 yuan per share, and a total of 30 shares, of which Zhang Jingjiang has one share and Dai Jitao has one share. Chiang Kai-shek has three shares, signed by Dai Jitao on his behalf. /p>

The Liyuan ship was set up, and it was similar to Maoxin’s initial fate. It was squeezed out by his peers, which made Chiang Kai-shek extremely indignant. On July 8, Chen Guofu wrote to Chiang Kai-shek to report on the weak business conditions, according to the letter. It reflects a mentality of doing nothing. However, the facts are just the opposite. On the 718th, Zhang Jingjiang and others decided to expand the business scope of Liyuanhao, "concurrently run the gold industry", and at the same time decided to increase the share capital by 200 yuan per share. It is calculated that Chiang Kai-shek added 600 yuan, Zhang Jingjiang and Dai Jitao each added 200 yuan, a total of 6,000 yuan. Since then, the business of Liyuanhao has grown.

So far, Chiang Kai-shek has invested in Maoxin and Hengtai successively. Five brokerage firms, including Liyuan, Xinfeng, and Dingxin, have done their best.

The business situation has plummeted, and Chiang Kai-shek has lost a lot of money

Although Shanghai’s exchange business was prosperous for a while, but at that time, the domestic business was in a downturn and the exchange developed abnormally. The turnover of each exchange would inevitably be greatly reduced, insufficient funds, followed by decline. From 1921 Since August, Shanghai’s exchange business began to decline. On September 28, Chen Guofu wrote to Chiang Kai-shek. In the letter, Chen Guofu told Chiang Kai-shek that he decided to stop Maoxin’s business from October 1st and resigned because of concerns about the danger of business conditions. Associate position of Dingxin, moved his family back to his hometown in Huzhou. Chen also said: "Mr. Jingjiang has been in contact with Maoxin to end the matter, and Mr. Jingjiang also agrees, and my uncle must also agree. "However, Maoxin did not "end" later, probably because of Chiang Kai-shek's opposition.

The situation reflected by Chen Han is actually a microcosm of the entire Shanghai Stock Exchange business. According to statistics, November 1921 , Shanghai has 38 exchanges closed. In December, there were almost every day. In February of the following year, the Shanghai French Concession Ministry of Industry issued the "Exchange Banning Rules", which stipulated strict management and punishment regulations. Until 1922, 3 In September, the exchanges exclaimed that "the air is violent, and social beliefs have plummeted." They closed their businesses for liquidation. There were many brokers who committed suicide due to bankruptcy. Chiang Kai-shek’s fellow township and comrade Zhou Junyan (who owed 200,000 yuan in debt due to arbitrage, twice Suicide by jumping on the Huangpu River) also committed suicide once. 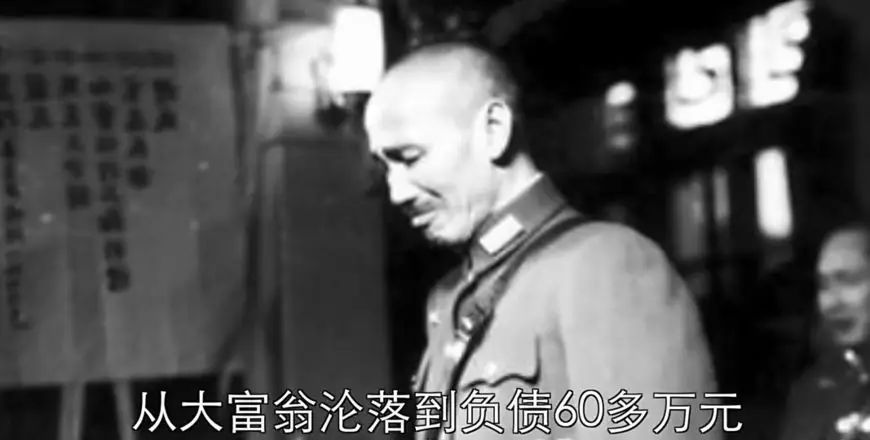 Chiang Kai-shek's reflection afterwards, first, he believed that Zhang Jingjiang was too much. May 1922 The diary on May 23 said: "I entrusted Jingjiang with 200,000 gold, granting full powers, but I can't ask myself, although I believe people must be expert, I am too divided. "The first is that Chen Guofu has a problem. On June 6th of the same year, Chiang Kai-shek's diary said: "Guofu is a man, self-interested and self-interested, too bad. Condemned it. ”

The impact of life on the exchange on Chiang Kai-shek

After bankruptcy, Chiang Kai-shek "escaped" the exchange in a difficult life.

After the business failed, Chiang Kai-shek's situation was very difficult-on June 14, 1921, Jiang's mother died of illness and medical funerals, which naturally cost a lot. After the bankruptcy of the exchange, Chiang Ching-kuo needed only 15 yuan for clothes. However, Maoxin refused to pay, which shows its extremely difficult situation. During this period, Chiang Kai-shek was in poor health and was in a bad mood. The exchange had seriously affected his mood. Jiang once complained in his diary: "Last night, The exchange is not over, my dream is upside down. The world is so difficult, it is impossible to work with others. Until three o'clock in the evening, the matter had to be resolved. "On 16th, 1921, Chiang Kai-shek was appointed by Sun Yat-sen to lead a delegation of Dr. Sun Yat-sen to visit the Soviet Union. After that, Chiang Kai-shek no longer involved in the affairs of the exchange.

During the first National Congress of the Kuomintang in 1924, Sun Yat-sen decided to establish The Army Military Academy, with Chiang Kai-shek as the chairman of the school preparatory committee. The Maoxin and Dingxin brokerage firms in Shanghai have closed down one after another. The colleagues went south to the Whampoa Military Academy to find a new way out. Only Chen Guofu stayed in Shanghai to clean up the leftovers. /p>

The impact of exchange activities on Chiang Kai-shek’s thoughts

The activities of the exchange also enabled Chiang Kai-shek to understand the plight of the Chinese national bourgeoisie. In June 1920, Chiang Kai-shek had just decided to put out 5,000 silver dollars and co-founded Youai Company with Chen Guofu, and he caught up with the international financial trend and the price of silver fell sharply. This incident inspired Chiang Kai-shek's nationalist sentiments. The diary said: "Silver prices fell sharply for three days, and it was six cents. Financial institutions, in the hands of outsiders, and the people of the country were squeezed from time to time. It is regrettable."

The failure of operating the exchange strengthened Chiang Kai-shek’s Social transformation thoughts. In December 1920, he consciously "is arrogant and irritable, and hates society even more". The diary said: "I am extremely disgusted with Chinese society, and I vowed to reform it." This idea was not only written in the diary, but also promoted to Shao Yuanchong and others, claiming that "China should undergo major reforms and should undergo thorough reforms." . During this period, it was when he repeatedly lost money on the trading floor.

Of course, the activities of the exchange also strengthened the connection between Chiang Kai-shek and the Jiangsu and Zhejiang financial bourgeoisie. In 1924, Chiang Kai-shek asked Chen Guofu to purchase uniforms, belts, gun belts, scabbards and other items for the Whampoa Military Academy in Shanghai and detain them for the Shanghai Customs. Ye Zhuotang, Wang Yiting, Shen Tianxin, Yu Qiaqing and others came forward to mediate. In 1927, the Northern Expedition advanced to the middle and lower reaches of the Yangtze River. The financial bourgeoisie of Jiangsu and Zhejiang placed their hopes on Jiang and invested one after another to support him against the left-leaning Wuhan Nationalist Government. This was not without reason.