Stock market analysis: A brief analysis of the power of the direct sales model of Hailan House! _ Sales

The unique direct sales model realizes the separation of ownership and management rights.

On the sales side, the company forms a community of interests with franchisees. Franchisees are established by franchisees who raise funds and go through industrial and commercial tax registration procedures in their own names. Franchisees own the ownership of the franchisees. . The company is fully responsible for the internal management of the stores, ensuring the unity of the national operating system and brand image. Franchisees do not need to participate in the specific operations of the franchise stores, but only need to pay related fees. The company and the franchisee adopt a commissioned agency sales model and have the ownership of the goods. The franchisee does not bear the risk of unsalable store inventory. After the goods are sold, they will share the proportion according to the agreement. The power of the similar direct sales model lies in the following points:

1) The company has the management power of the stores, and actually controls the sales channels, "one thousand stores." The recruitment, training, hiring, dismissal and management of franchise store management personnel and sales personnel, the remuneration standards of management personnel and sales personnel, and specific business activities such as distribution, replenishment and seasonal replacement during the agreement period are all carried out by the company on behalf of the company. The franchisees are specifically managed, and the company actually controls the sales channels. The franchise stores are planned by the company's unified image (including unified trademarks, unified storefront and hall images, unified employee clothing, unified advertising), unified supply, unified guidance prices, unified business models, unified service specifications, which is conducive to unified branding Image.

2) The franchisee owns the store ownership, but does not participate in the specific operation, and degenerates into a financial investor, which reduces the threshold for franchising and facilitates rapid expansion. Under the company's franchise model, the company does not require franchisees to have experience in the clothing industry. Franchisees actually only need to bear franchise rent or depreciation and related expenses (currently, franchisees no longer charge a deposit of 1 million, but only need to bear the rent at the beginning of the store. You can open a store, decoration costs, clerk fees, etc. can be paid after the store is sold), which greatly reduces the threshold for joining, maximizes the use of social funds, and accelerates the layout of the marketing network.

3) The ownership of the goods belongs to the company, which helps the company maximize its income. Franchisees do not need to worry about inventory risks. The company can use the terminal information system to allocate goods between different stores in a timely manner based on the actual sales situation, reduce the slow sales of stores, and increase the company's overall sales scale. The number of stores is expanding rapidly, verifying the strong advantages of the direct sales model. The main brand of Hailan House opened its first store on Zhongshan North Road, Nanjing in September 2002, and has grown to 419 stores in 2007. From 2008 to 2018, there was a net increase of at least 200 stores each year (excluding the net increase of 169 in 2015). The third quarterly report of 2018 showed that the number of stores had reached 4891. The rapid expansion of the number of Hailan Homes stores has proved the powerful advantages of the similar direct sales model. At present, the number of Hailan’s home stores has ranked first among major listed men’s clothing companies. Compared with the rising trend of the number of Hailan’s home stores, the remaining men’s clothing companies have entered a period of adjustment in their channels after experiencing the peak period of the number of stores. stop moving forward. 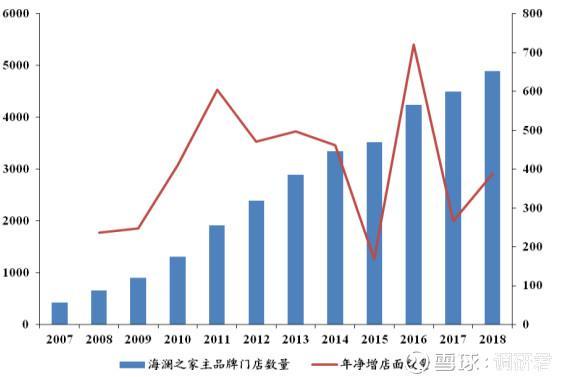 Hailan’s online channels still have a lot of room, and online growth is expected to drive the increase in gross profit margin. The online sales of Hailan House are in charge of the company’s wholly-owned subsidiaries. In addition to some mainstream e-commerce platforms, there are also the company’s official website and mobile APP wireless platform. The online sales of the “Hailan House” brand adopts online sales. Under the same model and price sales model at the same time. Due to its greater emphasis on offline channels, Hailan House has been late in deploying online channels, with a small proportion of online channels, only 5.9% in 2017, and online sales revenue reached 1.054 billion yuan. The first three quarters of 2018 still maintained a rapid growth rate of nearly 30%, and there is still a lot to do online. In response to customers’ personalized consumer needs, the company has accelerated its O2O store layout, and introduced a policy that online purchases of "Hai Lan Zhi Jia" brand clothing can be exchanged in "Hai Lan Zhi Jia" brand stores across the country; Hai Lan in 2018 The home of the Meituan takeaway, online and offline linkage, continuously improve the shopping experience and time-sensitive experience of consumers, and effectively protect the rights and interests of consumers. Online gross profit margin was significantly higher than offline. It remained at 57%-60% in 2014-2017, and offline gross profit margin was basically maintained at around 40%. The rapid online growth is expected to drive overall gross profit margin increase.

Conformity With new changes in retail channels, shopping mall channels have huge room for growth. Shopping malls are the product of the retail terminal development to a certain stage, integrating culture, entertainment, leisure, sports and other consumer behaviors, meeting the people's growing material and spiritual needs, and being a place where traffic gathers. From 2010 to 2016, the number of domestic shopping malls increased from 2,563 to about 4,700, with rapid development. In the third quarterly report of 2018, the number of Hailan’s home shopping malls plus shopping malls accounted for about 17%. The main brand of Hailan’s home opened new stores to increase the proportion of shopping centers, and the old stores were converted. Women's clothing brand Aijutu was mostly in Shopping malls open stores, new brands AEX/OVV/Hailan Optimal are also suitable for opening stores in shopping malls, the company's shopping malls will continue to increase the proportion of shopping malls, and single-store revenue will increase accordingly. (Author: Jun Jun)