Potential coin recommendation, what is the BAT (Attention coin) coin for gray holdings? ? What are the applications? ?

Hello everyone, I am a handsome guy in the currency circle

Speaking of BAT is not a small partner in the currency circle, you may think of the three major domestic companies (Baidu, Ali, Tencent), but what we are talking about here BAT is a cryptocurrency BasisAttentionToken that has been continuously increased by Grayscale recently! So what is BAT, handsome guys will show you all about it.

a new type of advertising that accurately quantifies user attention and rewards Platform, the project is based on the decentralized digital advertising business of the Brave browser, through the use of zero-knowledge proof, to protect user privacy, and at the same time, the user's attention can be rewarded by BAT.

onWhen we talk about Web3.0, BAT is a token developed based on Web3.0. (If you don't know what Web3.0 is, please see my previous article

What is Web3.0 in the blockchain). In a centralized world, users’ personal data is not verified. When we open certain webpages, watch movies, or watch football games, some advertisements will automatically pop up, allowing you to receive passively. Discuss with you,

Will anyone give you money when you watch the ad? Of course not! Advertisers will only contact the platform side, and the interests only have a relationship between the two, and they have nothing to do with you. This is a manifestation of the lack of real rights and interests of centralized users.

Obviously, you have wasted your attention when you read the advertisement, but the platform party gets the benefits.

How about another way? When you browse the web, the platform will push advertisements to you.

Ask for your opinion, you can customize to watch or not to watch. You will get corresponding rewards (BAT Token) for watching the advertisements. And the pushed advertisements are also According to your preferences, are you willing to watch ads in this case? This is the application scenario of BAT (Basic Attention Token) described in the vernacular, which turns your attention into a token to realize.

BAT is the native token of the browser named Brave, Brave is an autonomous browser, just like Google or Safari, advertisers pay potential customers to watch their ads cost.

Brave uses the ANONIZE algorithm to count user behavior, such as which links are clicked the most , Or which website has the longest stay, etc. These behaviors can be quantified using the unit of "attention". The specific method is to embed the blockchain ledger system in the browser, and the token circulating in this system is BAT (note Licoin).

It will allow businesses, website owners and users to maintain a good positive feedback relationship.

The mining method of BAT tokens is quite special-allowing users to watch advertisements. Simply put, when you use the Brave browser to watch advertisements, you spend your attention, and the system will send BAT tokens to users as rewards. This harmonizes the relationship between users and advertisers and creates a win-win-win situation. The advertising viewing rate of advertisers has been increased, costs have been reduced, and high-quality content has received a higher reading rate. In order to obtain BAT token rewards, users have reduced their resistance to advertising. The website owner has successfully attracted the attention of users with advertisements and high-quality content, and the system will also reward them.

On January 23, 2021, Grayscale launched BAT as a new encrypted trust. Greatly promote the cityThe enthusiasm for BAT in the field has also made BAT soar by 10 times in a short period of time. As a newcomer in the cryptocurrency field, Grayscale is optimistic about its development potential to be able to choose BAT. As of the press date (July 14, 2021), Grayscale BAT holds 5.299 million BAT, valued at US$2.7841 million. 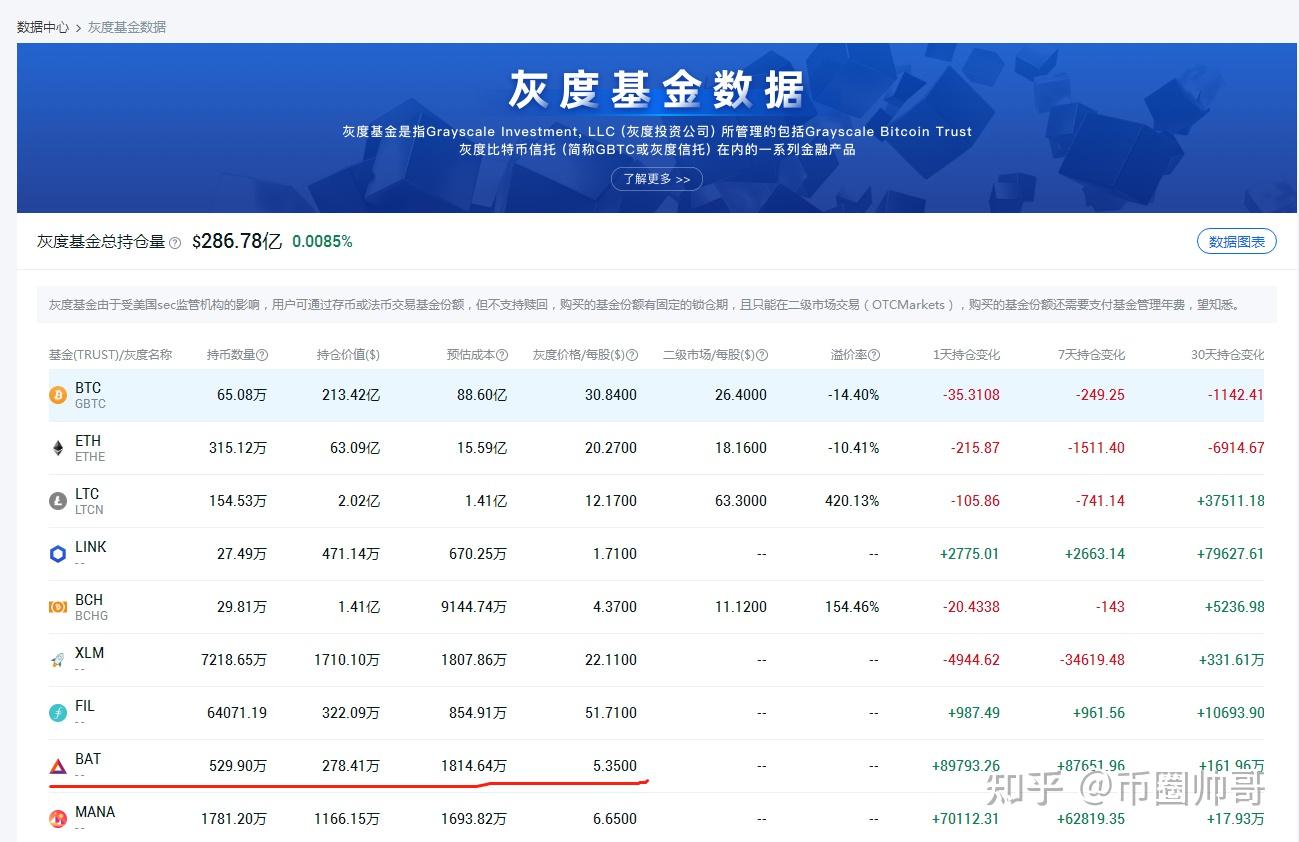 BAT’s positioning is clear, and there is no lack of technical support in the team, but it is challenging It is the cake of large Internet platforms such as Google and Facebook. At the stage where the browser market is basically finalized, it is difficult for new browsers to gain a large-scale market share. With the gradual development of Web3.0 applications, this situation will gradually open up, and the future development potential should not be underestimated!