Chinese concept stocks line up to return to China? Don’t panic, the SEC’s routine operations have been shouting for ten years.

Recently, Chinese concept stocks have been "short-selled by speech" and have to "queue to return to China". The speeches in the "darkest moment" are rampant, which stems from the statement by the chairman of the US Securities Regulatory Commission in the media "Don't invest funds in China, which is listed in the United States." Company stock".

Many articles attribute this incident to Ruixing’s financial fraud, and the decline in some Chinese concept stocks on the day of the announcement shows that the remarks have hit China concept stocks hard and predict that more Chinese concept stocks will be investigated . In fact, U.S. stocks generally closed down on Thursday. The three major stock indexes of Dow Jones, Nasdaq, and S&P 500 closed down. The next day, the three major stock indexes closed up. Popular Chinese stocks such as Baidu, Pinduoduo, and JD.com all closed. rise.

Let’s go back to the source and see when the chairman of the US Securities Regulatory Commission was based, on what scene, in what media, and what he said.

April 23 (the morning of April 22, local time in the US), Jay Clayton, Chairman of the SEC (US Securities and Exchange Commission, can be understood as the US Securities Regulatory Commission) In the morning news program

Mornings with Maria under the Fox Business Network (FOX Business Network), I accepted a telephone interview with the host Maria, answering questions about the CSRC’s response measures during the epidemic. Two questions, the middle two questions are related to Chinese investment.

The host’s question is based on a public statement issued by Clayton a few days ago. On April 21, the SEC official website released a public statement entitled "Emerging Market Investment Involves Major Information Disclosure, Financial Reports, and Other Risks, Limited Remedial Measures". It was signed by five people, including the chairman of the SEC and the chairman of PCAOB. Representative, China was mentioned 21 times in the statement. 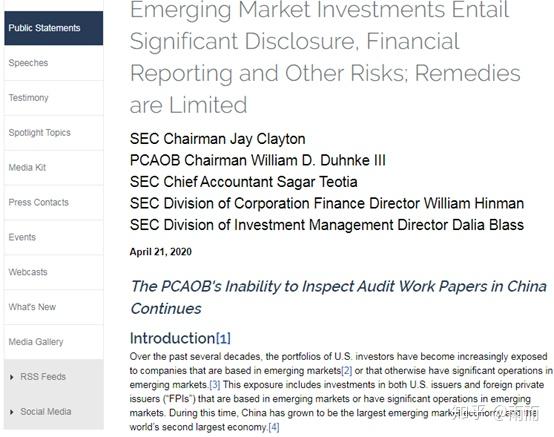 "We have struggled for a long time with the Public Company Oversight Board (PCOB) getting access to audit work papers. The Board still does not have access. It's a source of frustration for us because we don't have the same oversight with respect to operations in China from a financial reporting point of view that you do in most of the rest of the world ."

"For a long time, we and PCOBC have been working hard to obtain audit papers, but we still cannot obtain them. This makes us very frustrated, because from the perspective of financial reporting, our supervision of China and the world Most other places are different."

In fact, the SEC chairman’s core appeal in this statement is only one:

The Chinese authorities are required to open up the audit supervision of Chinese companies listed in the United States to the SEC and PCAOB. It is to obtain the audit manuscripts of China Concept Stocks. The first subtitle in the April 21 statement was "PCAOB still cannot obtain audit papers from Chinese companies."

First, let’s popularize the PCAOB, the Chinese name of the American Public Company Accounting Oversight Board. It is after the Enron fraud scandal that occurred in the United States Congress in 2001, according to the Sarbanes-Oxley Act of 2002 》Established to monitor the amount of information compiled by auditors of public companiesLarge, fair and independent audit reports to protect the interests of investors and promote the interests of the public. The SEC supervises the PCAOB, including the determination of the rules, standards and budgets it has formulated. China Concept Stocks were not subject to any restrictions by PCAOB at the beginning.

The SEC has been arguing about this for many years. The fuse is not Luckin's financial fraud, but the ancestor of China Concept Stock's fraud-the financial fraud of Southeast Rongtong nearly a decade ago.

In 2011, Southeast Rongtong's financial fraud incident triggered the China Concept Stock fraud crisis for the first time. In May 2012, the SEC sued Deloitte Shanghai Certified Public Accountants, accusing it of failing to cooperate with the SEC to provide relevant audit work papers in the case of financial fraud in Southeast Rongtong. Deloitte said at the time that it had submitted the documents to the China Securities Regulatory Commission, but Chinese law does not allow Deloitte to directly submit these documents to the SEC. This is the first case of the SEC overseas accounting firm.

Immediately in December of that year, the SEC initiated a lawsuit against five Chinese accounting firms, including the "Big Four", accusing the defendant of rejecting nine cases of financial fraud in Chinese concept stocks investigated by the SEC. Providing relevant audit work papers for Chinese companies suspected of fraud, in violation of the relevant provisions of US securities laws.

For more than three years, US regulators have been constantly exerting pressure on China through two channels: diplomatic negotiations and litigation. In 2013, Sino-US negotiations made initial progress, and the China Securities Regulatory Commission, the Ministry of Finance and PCAOB signed a memorandum of law enforcement cooperation. According to the agreement, PCAOB will request the China Securities Regulatory Commission and the Ministry of Finance to allow PCAOB to obtain relevant audit papers from the Chinese side for the case under investigation after the Chinese side has reviewed and agreed.

In the following years, the SEC has been struggling and tossing about this issue.

For example, at the time when sweaters were being hit, on December 7, 2018, the SEC issued a public statement on its official website, entitled "On the important role of audit quality and international audit and other information Statement on Regulatory Access-Discussing the current challenges in obtaining information for U.S. listed companies with important businesses in China. The signed author also includes the chairman of the SEC and the chairman of the PCAOB.

Recently, Luckin, iQiyi, Good Future, GSX, etc. The stock finance was accused of fraud, and the SEC took the opportunity to put pressure on it to reiterate its request to obtain the audit papers of China's concept stocks. This is a matter at the zf level.

Return to the source, think independently, and encourage each other.