As a highly monopolistic industry such as automotive chips, the supply side should be responsible for protecting supply security. This supply-side accident will bring a major opportunity for the rise of China's supply chain.

From a global perspective, Asian groups represented by Toyota (TM.US) and Hyundai-Kia have relatively strong performance, and Chinese car companies have the most prominent rebound effect. From January to April, the world share of Chinese cars was 32%. This is also China's strong response to the world's new crown epidemic, rapid economic and social recovery, and showing the characteristics of good development.

1. World car sales over the years

The car sales of the world’s major countries from January to April 28.25 million Taiwan, an increase of 33% year-on-year, has recovered superb performance after the epidemic. However, the sales volume in January-April 2021 is still lower than that in 2019, and there is a large gap between the high level in recent years. 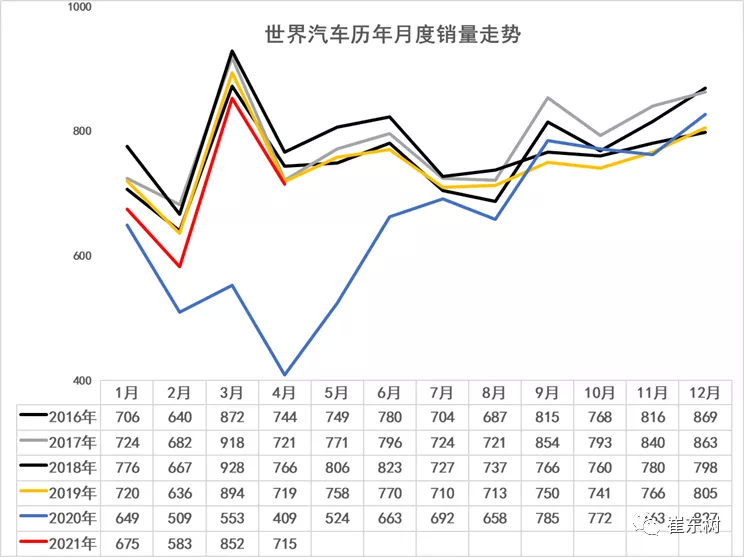 The trend of January-April this year is still lower than the previous year's sales level, only better than the level of 2020, so it is still in the recovery period.

World car sales over the years 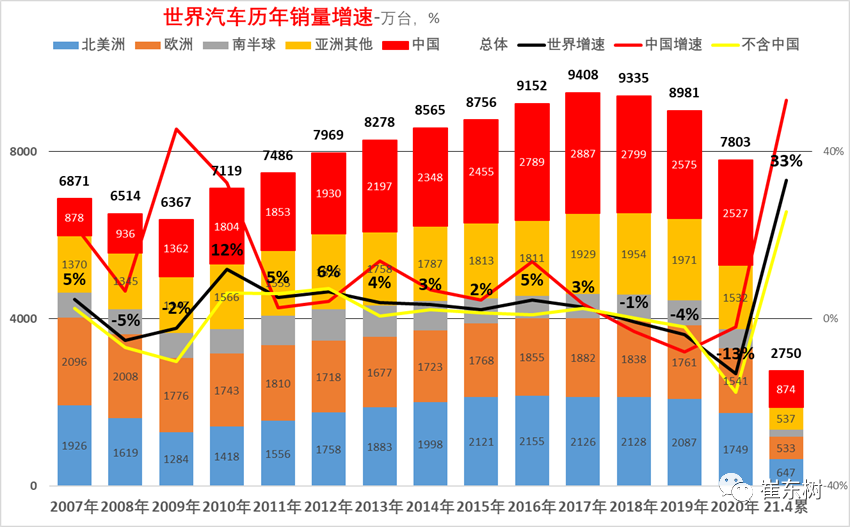 The world car sales in the above table are mainly sales in 70 countries , These 70 core countries have about 90 million units in 2019, which is basically able to track monthly sales.

There are 100 other countries that can only track annual sales, a total of about 3 million units in 2019. Relative to the core countries with 90 million units, the total amount of these smaller countries is about 3%, which has little effect.

From the perspective of world sales represented by major countries, world car sales in 2018 fell by 1%. For the first time since 2010, it has fallen into annual negative growth. Vehicle sales in 2019 were 89.81 million units, a year-on-year decrease of 4%. Slightly worse than the decline in 2008. From January to December 2020, sales fell by 13%. 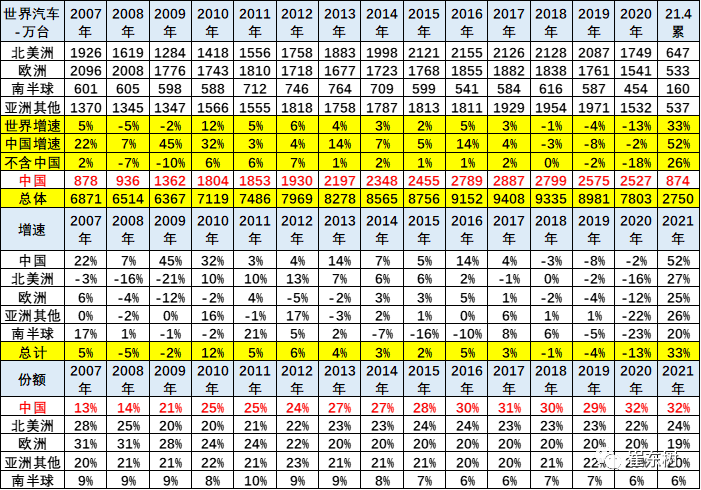 China’s auto market has a positive impact on the world’s auto market The influence is extremely huge. In 2018, Chinese automobiles accounted for 30% of the world, and in 2019 it dropped to 29%, but it still has an absolute advantage. However, in 2020, it will rebound to 32%. In the first quarter, China's share was surpassed by Europe. In January 2021, China's share rebounded sharply and reached a new high. 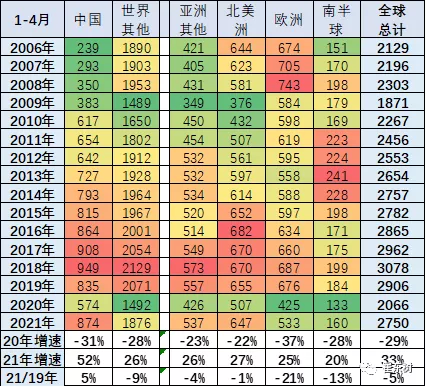 The world’s growth rate of 33% from January to April 2021 , Of which China grew by 52%, while other majorThe market is overall slower than China's growth rate. Therefore, the recovery rate of the world auto market is still relatively good in China.

However, the sales volume in China from January to April is still lower than the historical high level.

The control of the US epidemic has been greatly improved since Trump stepped down, so the US auto market has continued to pick up. The US auto market from January to April was significantly stronger than the European auto market.

4. Markets in developing countries are generally not strong 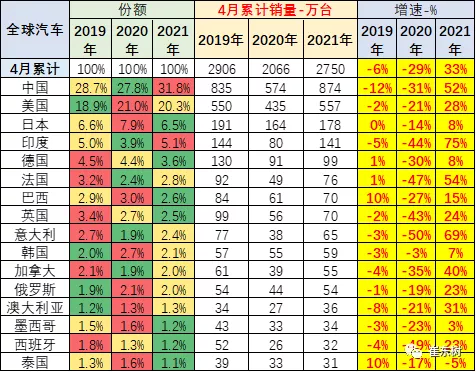 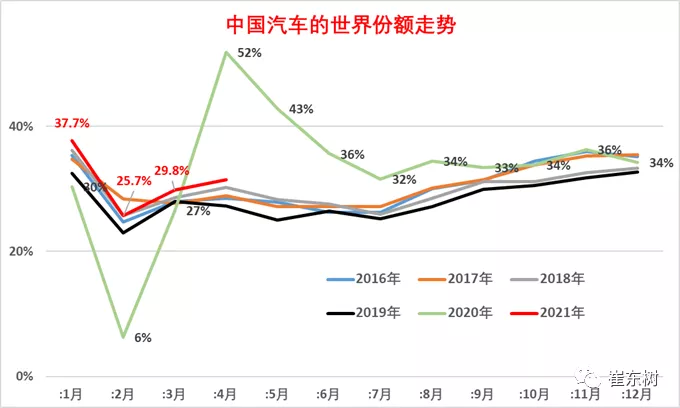 The main market decline in January 2021 It is the United States, and China's share is at a high level. From January to April in 2021, the Chinese New Year factors have led to a low world share, but China still reached 30% of the world share in April. This year, under the epidemic, the Chinese auto market is generally strong among the weak in the world.

6. The characteristics of monthly car sales in various countries In 2020, after a sharp decline in the Chinese auto market in April, there will be a rapid reversal in April 2020, which will continue to be strong from April to December. 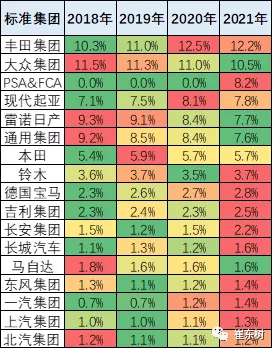 The Honda Group also reached a slightly lower share of 5.4% this year, but it still surpassed Ford. Germany's Mercedes-Benz and BMW Group performed very well. Hyundai Kia has continued to be strong in the past two years.

8. The performance of international groups in the proportion of each country 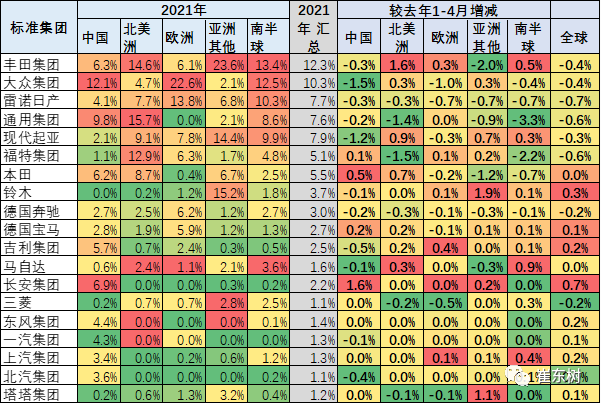 Companies such as Toyota perform well in China, but are weaker than other countries. which performed. Hyundai Kia has the smallest decline, but China's performance is weak.