According to the statistics of the US Department of Homeland Security, from 1980 to 1990, the number of Chinese (including Hong Kong residents) who obtained US green cards was 283,029.

If you get a US green card, if you do not become a US citizen, you will still be a Chinese citizen. Therefore, the number of Chinese who have immigrated to the United States has become American citizenship is another indicator for observing the Chinese immigrating to the United States.

According to the statistics of the US Immigration Service, as of 2000, a total of 71,599 Chinese citizens (including those born in Hong Kong) had obtained US green cards and became American citizens.

According to statistics from the US Department of Homeland Security, from 2001 to 2010, a total of 328,981 million Chinese citizens became American citizens, an average of more than 30,000 per year.

Why do Chinese choose to immigrate to the United States

As the main trend of Chinese immigrants, the "quality of education" is still high net worth The main reason for population migration is "environmental pollution". "Food safety" has emerged this year and has become the third main reason for overseas migration of high-net-worth individuals. Exceeds the "medical level" and "social welfare" that were more concerned in the past. In addition, unlike previous years, "asset security" has also become a factor that cannot be ignored for high-net-worth immigrants. Although there are variables in US policy, the world's best educational resources and extremely favorable entrepreneurial platforms are all attractive to the world.

The Chinese global asset allocation continues to increase their holdings

Since 2018, more and more high-net-worth individuals have expressed "overseas "Deposits", "overseas real estate", and "overseas trusts" will be the most important means of overseas financial investment. The United States is still the country where the respondents have invested the most in financial products overseas. 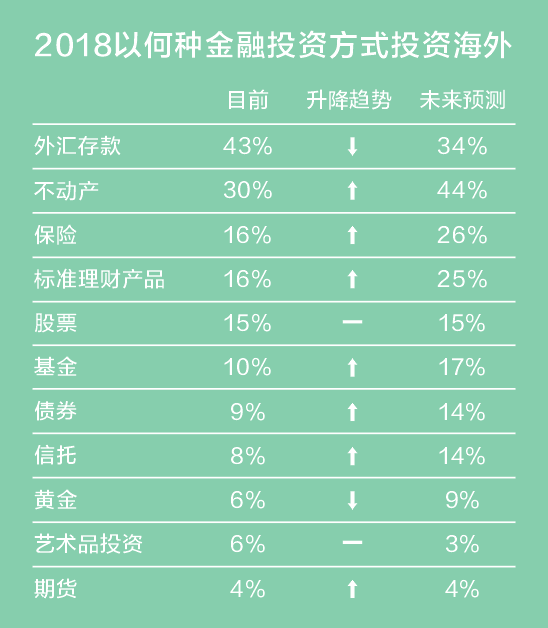 Chinese have the most employment in the three major fields

In the United States, what occupations are Chinese immigrants from mainland China engaged in? What is their economic status? These are all interesting topics.

If subdivided, the industries that Chinese are engaged in in the United States are mainly concentrated in four areas, and the employees in these four areas account for 60.9% of the Chinese labor force.

The arts, entertainment, tourism services, hotels and catering industries ranked second, with 15% of employees. Among them, the catering industry is still one of the pillar industries for the survival of Chinese immigrants in the United States. Chinese restaurants in major metropolitan cities in the United States have become a symbol of Chinese culture.

Ranked third is the manufacturing industry, with 13.5% of employees.

Ranked fourth are more professional occupations, science and management industries, with 13.3% of employees.

In addition, the industries with more Chinese employees include: wholesale and retail, with 12.7% of employees; financial and real estate, with 8.6% of employees; and the communications industry, with 3.2% of employees.

From the perspective of occupational categories, 52.2% of Chinese people are engaged in professional fields, management and related fields, and the proportion of the population is more than half. This is consistent with the statistics that the Chinese population is mostly highly educated. The average proportion of professionals and managers in the United States is 31.6%, which is less than one-third of the total population.

What occupations do mainland immigrants do in the United States?

So, what occupations do mainland Chinese immigrants do in the United States?