India, Brazil, and Russia are all economic powers. Why are there so few Fortune 500 companies? _ Global

Original title: India, Brazil, and Russia are all economic powers. Why are there so few Fortune 500 companies? There is also Russia, whose GDP in 2018 reached US$1.658 trillion, ranking 11th in the world. It can be said that India, Brazil, and Russia are all global economic powers, and their growth potential is not low, and they have a pivotal position in the international arena.

However, Nansheng noticed that in the Fortune Global 500 list released by Fortune in 2019, 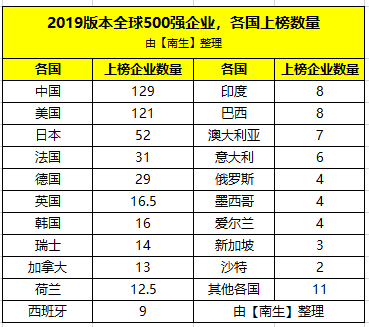 India, Brazil, and Russia are all economic powers. Why are there so few Fortune 500 companies?

Nan Sheng believes that there are mainly the following reasons.

First of all, India, Brazil, and Russia, although they are also global economic powers, are based on larger populations or richer resources. It is an economic power, not an economic power. Winning by quantity, not by "quality", so there are not many Fortune 500 companies.

Take India as an example, with a population of more than 1.3 billion. Although the total GDP is as high as US$2.726 trillion, the per capita GDP is only more than US$2,000. The breadth of its national economy is large enough, but the depth of sub-industry is not enough to create more Fortune 500 companies.

Look at Russia again. Of the four companies on the list, three are in the oil and gas fields. This is based on its powerful oil and natural gas resources. In other industries such as technology, finance, and consumer markets, Russia does not have particularly strong companies.

South Korea, Switzerland, Canada, the Netherlands and other countries, although the population of the country is small, the overall market size is not Big, but it has a leading advantage in sub-sectors. For example, South Korea is one of the best in the world in the field of semiconductor chips and shipbuilding; the Netherlands is a global leader in the top lithography machine...

Other reasons: new technology, emerging In the economic field, China and the United States are leading the way, while India, Brazil, Russia and other countries are poorly realized. We can see that Apple, Weiwei, Facebook, Amazon, Tencent, Alibaba, JD, Xiaomi, Huawei and other companies are not companies in traditional fields.

In the fields of new technology and emerging economy, such as the Internet, e-commerce, big data, artificial intelligence, 5G, etc., the market scale is constantly increasing, and it is at the level of hundreds of billions of dollars. Very large enterprises are mainly distributed in China and the United States. This article was originally written by [Nan Sheng], please do not reprint or plagiarize without authorization.