Demystifying the boss behind Arsenal: the richest man in Russia worth 17.6 billion and 100 million shares in Apple 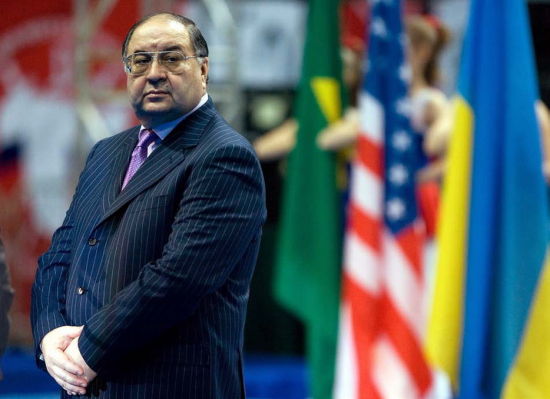 It is not easy to understand Alisher Usmanov. There are few in-depth reports of him on the Internet, and other news about him is like fragments. However, this slurred Russian name frequently appeared in major newspapers around the world in May this year. The reason was that in early May, Usmanov spent $100 million to purchase a large number of Apple stocks. The rich man's move at no cost has made it hard to take a closer look at Apple's performance and prospects in the loss of the "post-Jobs era".

After the launch of iPhone5, Apple's market value has evaporated by nearly $100 billion, and its stock price has fallen by 40% compared to last year's high. However, Alisher Usmanov still said that he is optimistic about the development of Apple, and believes that this capital injection will bring benefits to him. "In the next three years, Apple will still be a stock that is very worth investing in, especially They have already announced dividend and stock repurchase plans."

According to the 2013 Forbes Global Rich List, the 60-year-old Alisher Usmanov became the richest man in Russia for the second time with a worth of $17.6 billion, ranking 34th in the global rich list. This obviously blessed, round-headed boss told the public how he successfully lost 15 kilograms in a year on Russian TV channels a few years ago. But now he still looks like a "Russian" tall man, and his fashionable suit does not cover his fat waist.

The wealthy circles in Russia always seem a little bizarre, just like the country's territories. Many people think that Usmanov can be regarded as one of Russia's "oligarchs", and he has an unusual connection with the Moscow Kremlin. In the early 1990s, in Yeltsin's era, Usmanov was not famous at the time, but now he has become the richest man in Russia.

His business empire covers a wide range. The group controls Metalloinvest, a metal and mining company, and Megafon, Russia's second largest mobile phone network company, and bought the influential Russian Kommersant for $100 million. In addition, he injected capital into the British football club Arsenal [Weibo] and bought shares in Internet companies such as Facebook through digital technology companies.

In 1953, Usmanov was born in the city of Kyust in the Namangan region of Uzbekistan. His father is the Deputy Attorney General of Uzbekistan. He grew up in an environment with a strong political atmosphere. After obtaining a degree in international law from the Moscow Institute of International Relations, he returned to Nashkent to work in the Peace Commission, ready to make a big splash in politics.

However, things are impermanent, and he was sentenced to 8 years in prison for fraud and blackmail. According to his own explanation, the disaster originated from political repression, and he himself was the victim. Twenty years later, the Supreme Court of Uzbekistan ruled that the charges against him were unfair. The former Soviet court also rejected the charges against him and erased this record.

The road to politics no longer exists, so he turned to the business world. In the late 1980s, he made his first pot of gold by producing cheap plastic packaging bags. Later, in the transition of Russia's system, he gave full play to his financial talents and skillfully borrowed huge loans from banks to profit from the capital market. After completing the original accumulation of funds and signing a single contract, Usmanov turned to become a leader in the oil, gas, and steel industries.

Many old friends from his younger days entered the Kremlin one after another as Putin came to power, so he has always been regarded by the outside world as a "connected person" who has a close connection with politics. Usmanov received the President's Special Contribution Honor Award in 2004 in recognition of his contributions to business and philanthropy. However, he once explained to the "New York Times": "I am not an oligarch. I am single-minded in business and never get involved in politics."

But Usmanov is against Putin’s regimeThe support is obvious. In December 2011, Maxim Kovalisky, the editor-in-chief of the Russian "Regime" magazine, which belongs to the Businessmen Press Group, was fired. Usmanov made it clear to the outside world that the editor-in-chief was fired because the political cartoons published in the magazine contained indecent comments on Putin. He believes that the content is almost "slight hooliganism."

In 2007, Usmanov and his partner Fahd Mosheri formed the Red & White Holdings Group (Red & White Holdings), which purchased from Arsenal’s former Vice Chairman David Dane Get 14.65% of the shares, thus smoothly entering the Premier League veteran club. This football club’s investment activity has caused a surge in searches for the rich man on the Internet, which is quite similar to the path of the former Russian richest man Roman Abramovich. The latter’s acquisition of Chelsea [Weibo][Weibo] clubs gave European football the possibility of a re-explosion, became the new "overlord" in the English Premier League, and entered the mainstream of the British society through football.

However, Usmanov did not appear to be as radical as Abu. He slowly increased his holdings until he finally launched a full-scale acquisition of this club worth 600 million pounds, which caused a lot of internal controversy. As of June 2011, his Arsenal stake has increased to 29%, just one step away from a special value of 30%. By 2012, according to online media tracking, the shares of Red and White Holdings Group may have reached 29.9%.

There is an even more incompatible trend between him and the current largest shareholder Stan Kroenke. The two parties are competing for acquisitions, and the various disputes during the process seem to be inadequate for outsiders. In fact, 30% is not as important as outsiders think, and it does not guarantee a seat on the board of directors, but it can allow Usmanov to get in touch with the club’s financial situation and prevent Kroenke from owning 75%. The company reorganized the company's shareholding and excluded itself from the door of benefit-sharing. Kroenke, a 64-year-old "sports tycoon", currently holds 63% of the shares and has no intention of selling it.

Last July, Usmanov sent a strongly worded letter to the board of directors criticizing the operation of the club and accusing them of lack of investment. This happened after the star player Robin Van Persie announced that he would not renew his contract and switched to Manchester United [Weibo]. "We are facing the loss of a true iconic player because we are not confident that we can win the trophy." He wrote, "At the very least, as a top club, if we can't beat the offers of other clubs, we should also give a match. Offer a quotation and paint a more attractive future picture.” However, the BBC subsequently confirmed from the Arsenal board of directors that the original development direction will not change as a result.

Whether Usmanov uses Arsenal as a long-term investment is the source of many disputes. Although, he clearly stated in the letter, "Willing to buy more shares, but also willing to hold shares for a long time, so that the next generation of family members can take over in the future." It seems that these trusts cannot be established overnight.

Previously, the "Sunday Times" published the latest list of the British rich. For the first time, Usmanov became the richest person living in the UK with a net worth of 13.3 billion pounds.

Get involved in Silicon Valley

In recent years, the most noticeable move of this tycoon is to knock on the door of Silicon Valley and enter the virtual Internet technology world from the traditional oligarchic business community. In 2008, Yuri Milner, the first Russian student who graduated from the Wharton School of Business, came to Usmanov, hoping to obtain financing to tide over the financial crisis.

With the help of Milner's Digital Sky Technology (DST), Usmanov became the first individual investor other than the founder of Facebook, with shares but no voting rights. Not only that, but Google, the search engine boss, suffered a lot of setbacks because of his intervention, which caused the investment plan to vanish. As a result, he was put on the title of "spoiler" again.

Milner meets Usmanov several times a year. He admired Usmanov's research-driven investment style. "Every time I see him, there is always a stack of related documents neatly placed on his desk. He often reads, and often does several things at the same time." Milner said.

DST, an Internet company that has aggressively entered the Silicon Valley in recent years, has successively invested in popular companies "darling", which has attracted a lot of media reports and attention. The investment style of this company appears decisive, decisive and does not hesitate to high valuations. It was ridiculed by some established venture capital as "St.upid Money".

However, Usmanov doesn't care about these outside comments. He believes that the Internet is the core of the 21st century.

Therefore, DST bought the shares of Facebook game developer Zynga for the first time, and also owned 135 million US dollars of equity on the shopping network GROUPON.

After Silicon Valley, Chinese e-commerce has become Usmanov's new target. He hopes to get another pot of gold from the wave of future IPOs of Chinese technology companies. In March 2011, he stated that he had invested US$500 million in JD.com through investment in DST and obtained a 5% stake in the latter. This may be his last direct Internet investment at this stage.

Subsequently, the so-called "last stroke of this stage" argument quickly became invalid. According to Tiger Sniff.com, in the summer and autumn of 2011, DST joined forces with Silver Lake and other institutions to buy Alibaba shares for $1.6 billion.

1 It is because you are not up for it, this time the monthly gap filling operation has been cancelled.
2 [Tiger Sniff Morning Post] U.S. stocks plummeted, and Apple’s market value evaporated over US$150 billion overnight; Premier League announced the termination of contract with Chinese broadca
3 Tongdaxin volume and price resonance and low-purchase stock selection or early warning formula
4 Tongdaxin Volume and Price Spatio-temporal Attached Drawing Indicators Textured Source Code
5 How do you think that the incomplete leeks of Zhihu [email protected] and @Investor shares Hamming Lantern have become public?
6 The first stock of cloud computing, Youkerde, is listed on the Science and Technology Innovation Board, with innovations in hard technology strength and implementation of the CBA strategy
7 The shooting arrow of the demon stock taking off There are many indicators and signals. Tongdaxin vice map/stock selection indicators Source code Stickers (graphics)
8 Tongda Xinwen Lun on stock selection source code with photos
9 Winding theory stock selection formula, source code submap index formula
10 Leading Password Zhongyang Crossing the Bottom Picture/Stock Selection Index Tongdaxin Sticker Original No Future No Encryption