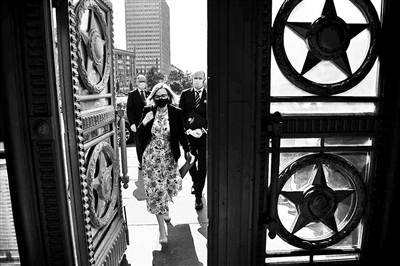 Recently, Russia and the United Kingdom A new round of diplomatic "war of words" was launched around the Black Sea fire warning incident. According to the Russian side, at noon on June 23, the destroyer "Defender" of the British Navy crossed the Russian border while operating in the northwestern Black Sea. The Russian Black Sea Fleet and the Russian Federal Security Agency were forced to fire and warn him to stop violations of the border. Drive away. The British Ministry of Defense issued a statement on the same day, denying that the British warship was fired and expelled by Russia in the Black Sea, and stated that the ship was "passing through Ukrainian territorial waters harmlessly in accordance with international law."

Has the Russian military opened fire? The BBC official website announced an audio report from the ship’s reporter Jonathan from the scene: “The destroyer'Guardian' continues to travel in the territorial waters near the Crimean Peninsula, about 12 nautical miles away. When approaching the southernmost tip of the Crimean Peninsula. The personnel on the warship are already in combat positions, and the shipboard weapon system is also ready. This is intentional, and it is intended to show our position to Russia." The Russians used radio to warn British warships several times. At that time, nearly 20 Russian fighter planes flew over the warship, and he heard the sound of shooting.

The Russian side’s statement is more specific: "The Russian border frigate fired at 12:06 and 12:08, and the Su-24 aircraft issued a warning to the Defender. The destroyer threw bombs in the direction it was sailing." After that, the "Guardian" sailed out of the Russian border.

Experts pointed out that no heavy weapons have been used in this situation in the past. The Russian Ministry of Foreign Affairs specially summoned the British ambassador to Russia, Deborah Bronnet, to strongly protest the violation of the Russian border by the British destroyer "Guardian" in the Black Sea and warned that if similar provocations occur again, everything is possible. The consequences will be borne by the British side.

The British side, who took the initiative to pick things up and suffered a dumb loss, deliberately downplayed the treatment, some of which meant that "there is no silver or three hundred taels". The British Ministry of Defence issued a statement saying: "This Royal Navy ship passed through Ukrainian territorial waters harmlessly in accordance with international law." "We believe that the Russians are conducting artillery drills in the Black Sea and have issued an early warning to the maritime community regarding their activities." p>

The live ammunition fire warning incident shows that Russia-UK relations are in a bad post-Cold War trough. Looking back at history, as the two powerhouses on the geopolitical map of Europe, the turbulent relationship between the British Empire and Russia is a main line of European diplomatic relations. Throughout the diplomatic strategy of the British Empire, the philosophy has always been the belief that "there are no eternal friends or enemies." In practice, it is impossible to tolerate the emergence of a power threatening itself on the European continent.

Therefore, we will see the United Kingdom teaming up with Russia and Prussia to besiege Napoleon in France, and we will also see the United Kingdom trying to unite France and Russia in World War I and World War II. Strike the rising Germany. During the Cold War, it was an old topic that Britain and the Western camp joined hands against the Soviet-led Eastern Soviet camp. After the end of the Cold War, Europe still felt like a threat from Russia, and the strategic intention of the West to contain and suppress Russia was well known to passers-by. Moreover, compared with major European countries such as France and Germany, the United Kingdom is more active in suppressing Russia and is more in line with the United States.

Not to mention, since the new century, the relationship between the previous owner of No. 10 Downing Street and the Russian helm Putin has never been “close”. Moreover, Britain is quite a little deliberately proactively provoking and making trouble. The "Spy Poisoning" incident a few years agoIs typical. On March 4, 2018, the two former Russian intelligence agents Skripal and his daughter, known as "double spies," were in a coma in Salisbury, a city in southern England, who were suspected of being poisoned and discharged after treatment. According to the British side, they were hit by the "Novichok" nerve agent developed during the Soviet era.

The then British Prime Minister Theresa May decided to take a series of measures including the expulsion of 23 diplomats. Other retaliatory measures include the suspension of all planned high-level bilateral activities between Britain and Russia, including the cancellation of the meeting between the British and Russian Foreign Minister Lavrov in the UK. Under the agitation of the United Kingdom, the United States and many other Western countries and their allies "stand in line" to expel Russian diplomats. Russia has repeatedly accused the British side of "planting" and expelling diplomats from Britain and the United States and other countries with equal numbers. So far, Russian-British relations have fallen to their lowest point after the Cold War.

After the British Prime Minister Boris Johnson took office, he once said that the relationship between Britain and Russia might be "restarted", but then he declared that he "changed his mind again." In the past two years, the Russian-British relations have not improved much, and there have been constant bumps and bumps. The fire warning incident is one of the silhouettes.

The root cause is that the United Kingdom and Washington are advancing and retreating together. Compared with Western European countries such as France and Germany, Britain is determined to follow the United States. Recently, after U.S. President Biden visited Europe, France and Germany's strategic idea of ​​confronting Russia was nothing but a fake. Recently, they have called for a high-level summit with Russia. On the other hand, Britain sent warships to the Black Sea to pick things up.

Second, it is strategically determined that Russia is in decline. Richard Moore, the director of the "MI6", a British intelligence agency, once publicly declared that "Russia is an objectively declining power in terms of economy and population." This view has quite a market in the United Kingdom and the West. Downing Street may think that it can be a tentative test to see whether Russia is a "soft persimmon."

Third, the last dream of a naval power is still haunting it. The British Empire once became the "empire that never sets in the sun" dominating the world, one of which relies on the naval power that prides itself on the world. Today, Britain’s naval power is still at the forefront of the world. Going to some sensitive waters to show muscles can have the addiction of "looking back".

The New York Times website of the United States reported that the United Kingdom is reporting to the Pacific The deployment of the naval fleet is the largest deployment since the Falklands War. Britain hopes to return to this area once belonged to the British Empire. At present, Britain is suffering from the double blow of "Brexit" and the epidemic, but it is really enough to go to other people's door to pick things out.