The real Russian economy: things are beyond your imagination? !

"I went to the supermarket to buy things, and met a neat and clean old grandma more than once, and said apologetically, can the girl buy me a'Da Liba', I'm very hungry...Da Lie It’s more than ten or twenty lures, and it’s a renminbi or two."

"The old grandmother, who has been walking on many roads on the roadside, is pushing a cart to sell her own potatoes or pickles. Good and cheap, they will say a bunch of nice things to thank you after I bought it."

"But I also met a pale-faced uncle who asked for the fare at the bus stop, so I saved enough. Money turned around and went to the supermarket to buy wine and drink..."

"At the end of the month, roommates often send messages pitifully, can you buy me a chocolate, I'm so hungry... Don't get me wrong, people It’s not a gluttonous snack. Chocolate and black tea is a meal..."

The above is the daily life of many Russians. Isn’t it different from what you think?

According to data from Russia's state-owned research organization, the All-Russian Public Opinion Research Center (VTSIOM), in December 2015, 85% of Russians said that their living standards had declined. Among them, 37% said that rising prices of goods have restricted their purchases of food.

How bad is the food rising? The picture below is the data of the Russian price website tsenomer. The arrows represent the 1-month and 3-month increase of food products (as of February 23, 2015):

The price of wine has risen by 25.3% in 3 months, and Russians can’t even afford to drink.

Even in Moscow, the most developed economy, most of the citizens’ wages are used for daily expenses. The following quoted data from the Russian weekly "Arguments and Facts": 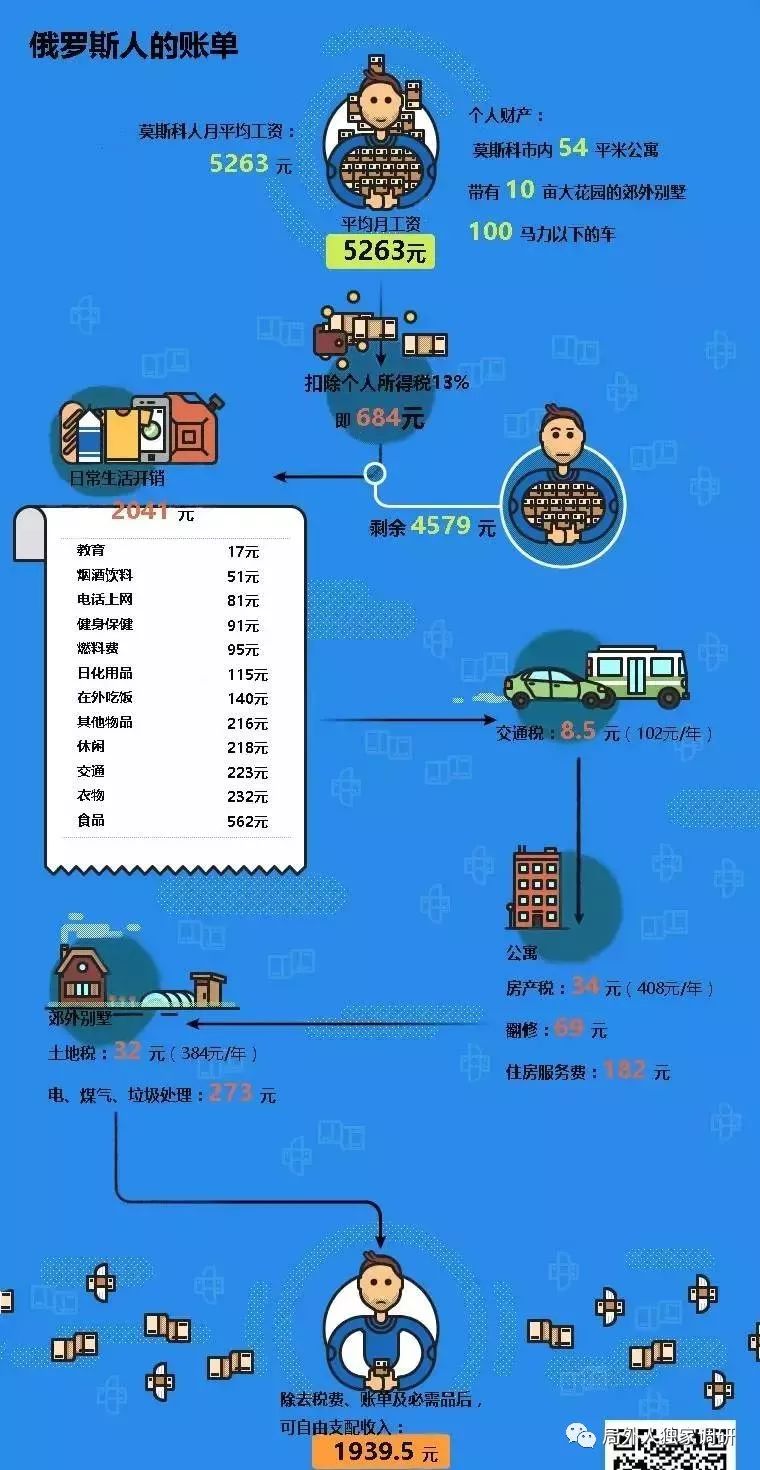 Outside the capital, the situation may be even less optimistic.

But this is not the whole story.

On the streets of Moscow, there are not only grannies who cannot afford bread, but also countless luxury cars and magnificent high-end clubs. In the famous Yeliseyevsky Supermarket, a huge golden chandelier hangs from the high dome. On the walnut shelves nearly two meters high, the red caviar made by salmon roe is displayed, which is world-renowned. Vodka, lettuce from the Netherlands, tomatoes from Spain, grapes from the Caucasus... 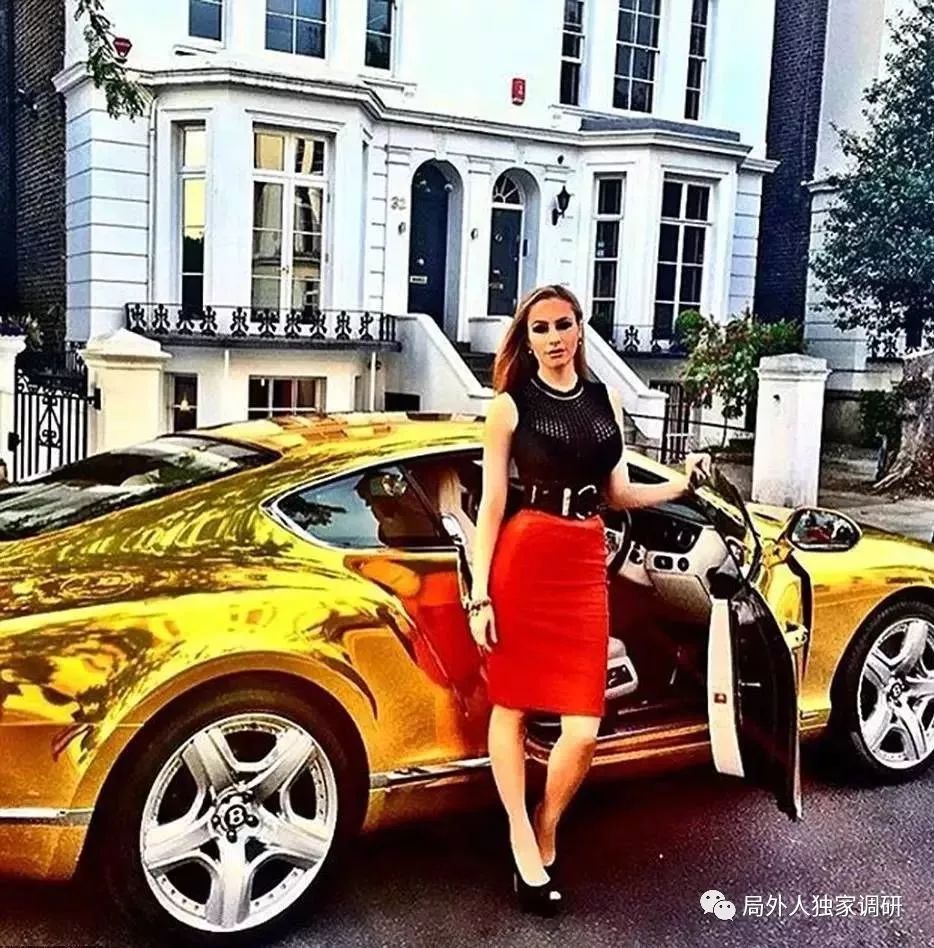 The rich second generation of Russia

Yes, this is also Russia.

After the disintegration of the Soviet Union, in just a few years, state-owned assets were captured by oligarchs and Russian upstarts, and the gap between the rich and the poor rapidly widened. According to the "Global Wealth Report" released by Credit Suisse in October 2013,

Russia is the country with the largest gap between rich and poor in the world. The country has a population of 143 million, but 110 rich people hold 35% of the country’s wealth. In contrast, 93.7% of adults have all household belongings of less than US$10,000.

In 2016, the "2016 Global Wealth Report" released by the Credit Suisse Institute stated that Russia was

The picture is from Huitong. The data is from Credit Suisse.

There was a news not long ago. A 54-year-old Russian man made hundreds of millions of dollars in oil business. Although he has children but no wife, he signed up for a reality show.

FromAmong the 2000 candidates who signed up, choose a wife, and the judge is his biological daughter. The women who participated in the selection had to be looked at from head to toe by the three daughters, including appearance evaluation, age, and fashion taste. Many people were eliminated at this level, and there was no chance to meet the rich.

This is another portrayal of the big gap between the rich and the poor in Russia. The rich are rich, and the poor are also obvious.

In recent years, oil prices have plummeted and Western sanctions have made the lives of ordinary people in Russia more and more It's not easy. The economy has been growing negatively for many years, and the devaluation of the ruble has emptied their wallets. At the same time, the rich are busy transferring assets abroad.

According to the Capital Amnesty Law, in 2015, foreign property, bank accounts, securities, and stocks of foreign companies or foreign companies holding companies can be declared on a voluntary basis in Russia. If violations of laws and regulations occur before the deadline, they will not be held accountable.

"Give me 20 years and return you a miraculous Russia."In 2000, Putin was in the general election. The scene is full of pride and tears are on the Red Square.

[Extension] Russia is so short of money, why spend 14 billion US dollars to host the World Cup?

The various upsets of the 2018 World Cup in Russia made the rooftops of China bursting.

In recent years, Russia’s GDP has only been over US$1 trillion, which is a bit less than South Korea. It is said to be

"The poorest modern country". Russia is really short of money in recent years. Because of the Western blockade, the price of oil has not been high. For Russia, which relies on selling resources, it is difficult to change its economic situation. In addition, during the Syrian war, Russia spent billions of dollars with money and troops. The domestic people's livelihood has not been improved for a long time. Rare demonstrations broke out at the beginning of this year, and the domestic conflicts are also great.

Under this circumstance, why does Russia have to pay for the World Cup?

There is media analysis, and there are three real reasons:

First, the relationship breaks through.

If you want to develop the economy, you must ease your relationship with the West. As a world-class sports feast, the World Cup is comparable to the Olympic Games. It is a good sports diplomacy. It is very important to open up communication channels and improve relations.

In the past 10 years or so, Russia has experienced a sluggish economy and domestic depression, while domestic reforms are struggling. Therefore, it urgently needs a big stimulus to stimulate employment, domestic demand and external investment. The World Cup can solve this problem very well. Although Russia spent 14 billion US dollars on hosting the World Cup, this money has not only turned into the precipitation of Russia's infrastructure, but also brought hundreds of thousands of jobs.

It can also bring economic benefits of at least 30 billion U.S. dollars, which can drive tourism and consumption. The most typical example is that the number of Chinese tourists to Russia during the World Cup alone exceeds 100,000.

Third, the icing on the cake.

Russia is very strong militarily, and politically, but it still has a great lack of soft power such as culture, and the World Cup is a symbol of national strength and status. , It is the icing on the cake for the rise of Russia.