Air pollution in Shanghai and Shenzhen surpasses Beijing or affects the value of A stock market by tens of billions?

National University of Singapore Business School Professors and students discussed the impact of air pollution on investor behavior for the first time during a brainstorming session in a literature discussion class. At first glance, the two seem to be unrelated. However, studies on the capital market have shown that changes in the environment may affect investor behavior through the effect on emotions and have an impact on the stock market. For details, please see below:

At the end of 2013, domestic and foreign media continuously reported the air pollution situation in China, and photos and stories of smog on social networking platforms such as Weibo were also quickly reposted. In a brainstorming session in a literature discussion class, we discussed this question for the first time: Does China’s air pollution affect the behavior of investors? At first glance, the two seem to be unrelated. However, studies on capital markets have shown that changes in the environment (such as weather (Saunders, 1993, Hirshleifer and Shumway, 2005), sunshine duration (Kamstra, Kramer and Levi, 2003) , Temperature (Cao and Wei, 2005), etc.), may affect investor behavior through the effect on emotions and have an impact on the stock market.

Investigations and experimental studies have shown that air pollution not only affects physical health, but also affects mood. Air pollution can cause anxiety, annoyance, and even affect people's stock price of works of art (Evans et al., 1988, Jones, 1978, Stone et al., 1979, Rotton, 1983). So, will the impact of air pollution on people's mood be transmitted to China's stock market? In order to study this issue, we used the historical air quality data provided by the Ministry of Environmental Protection of China to conduct a quantitative statistical regression analysis.

Currently, the Ministry of Environmental Protection website provides real-time and historical air quality data for major cities across the country. Before 2013, air quality was measured by API (Air Pollution Index); since 2013, cities have successively adopted the new air quality standard AQI (Air Quality Index). Although the measurement standards of the two indexes are different, the classification standards of the two indexes are similar. The range of 0-50 indicates good air quality, the range 51-100 indicates good air quality, and the above 100 indicates that the air is polluted. The higher the pollution index, the higher the pollution. The more serious the index exceeds 300, it means the air is heavily polluted, and the upper limit of the index is 500. Table 1 lists the scope and time period of air quality data currently available directly from the Ministry of Environmental Protection website.

Table 1: The air quality data range of the data center announced by the Ministry of Environmental Protection

Since the implementation time of the new air quality index is relatively short, we mainly analyzed the air quality data under the old standard. We manually downloaded all the air quality data from 2000.6.5 to 2013.12.31 from the website, a total of 381050 observations. Our research is based on January 1, 2001As the sample period from January to December 31, 2012, in addition to testing the relationship between air pollution and the capital market, we also used these data to analyze and test China’s air pollution from 2001 to 2012 (see appendix).

First of all, referring to previous studies on the relationship between air quality and capital markets, we will compare the A shares of the Shanghai and Shenzhen stock markets The daily return rate regressed the air pollution index of the two places on the same day. It was found that after controlling for the impact of the year, month and week, there was no significant correlation between the daily return rate of the stock market and the air quality. At the same time, the air quality When the pollution index is on both sides of the pollution threshold (100), there is no significant difference in the return rate of the stock market.

The above results seem to indicate that the haze has not had a significant impact on investors' investment behavior. But this may also be related to the failure of the Air Pollution Index to measure how people perceive air quality. On the one hand, existing studies have pointed out that air quality reports may be manipulated. For example, our data also shows that there are frequency breakpoints in air quality reports (see appendix), which may affect people’s confidence in the air quality index; on the other hand, Research on the impact of air quality on people’s psychological effects points out that sometimes what people “perceived” the degree of air pollution will play a role (Zeidner and Shechter, 1988). According to the "relative happiness theory" in sociology, people's perception of their own happiness comes from comparison, including comparison with historical stages and comparison with others. Do people compare the local air pollution index with other cities to get a judgment on the degree of pollution? Starting from this idea, we subtracted the air quality of the capital Beijing from the local air quality to calculate the "relative air pollution" indicator. This approach may seem arbitrary, but it is not without its merits. First, this is a very simple method of comparison. Beijing’s air pollution index is often listed at the top of the report, so people can easily compare it. On the other hand, the media is very concerned about Beijing’s air quality. It is also in the area with the most serious air pollution in my country. If the local air pollution index is higher than Beijing, it is easy to give people the impression of "very serious air pollution". 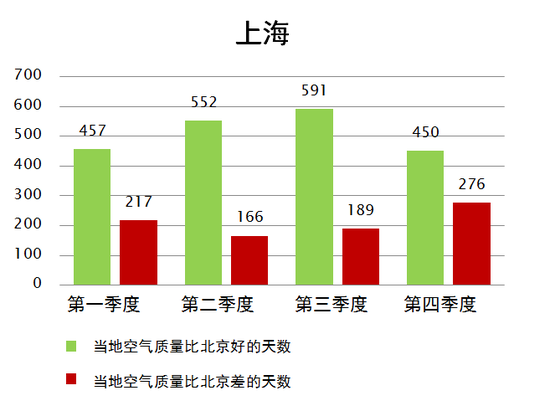 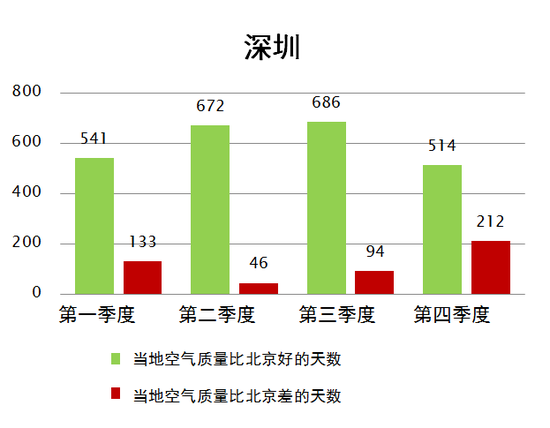 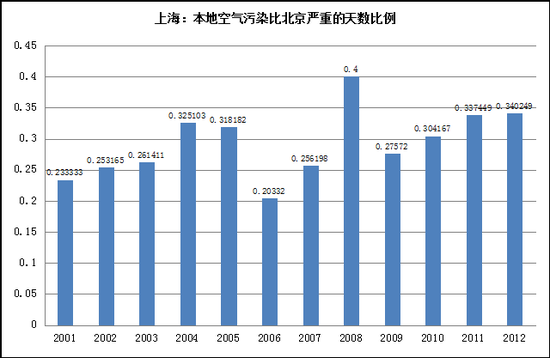 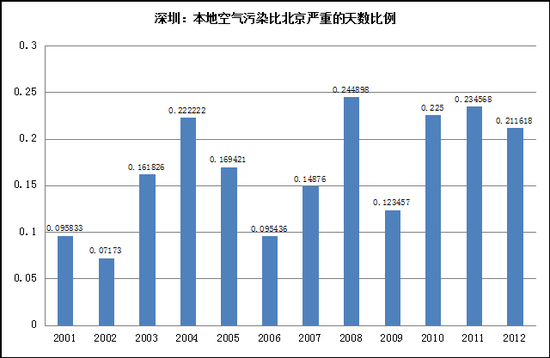 The impact of relative air pollution on stock market returns 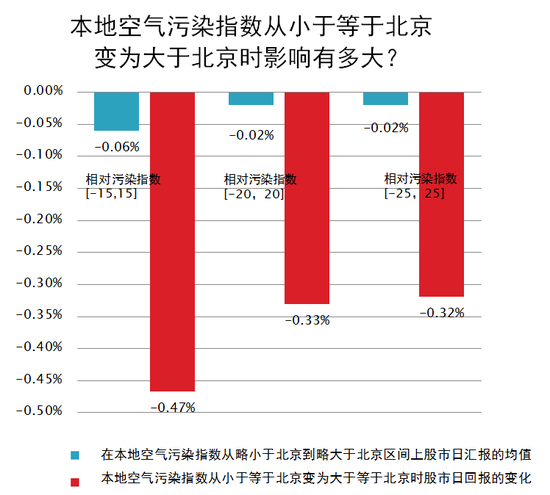 In addition, we also found that when relative air pollution rises, the trading volume of A shares in the Shanghai and Shenzhen stock markets will also drop significantly.

The closer the distance, the more relevant the air quality Regional distribution of air pollution: the north is more serious, the south air is better 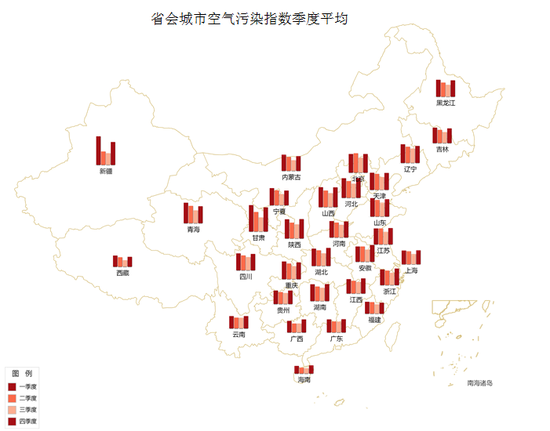 Seasonality of air pollution: the most serious in the first and fourth quarters, and the lightest in the third quarter 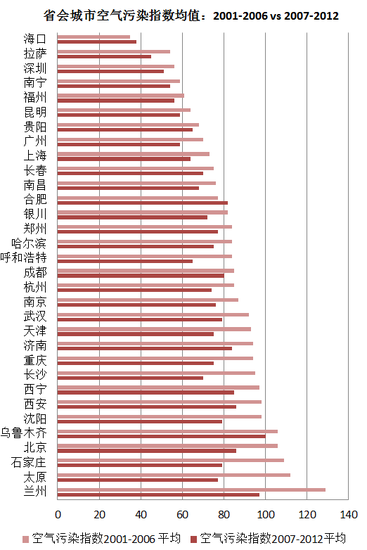 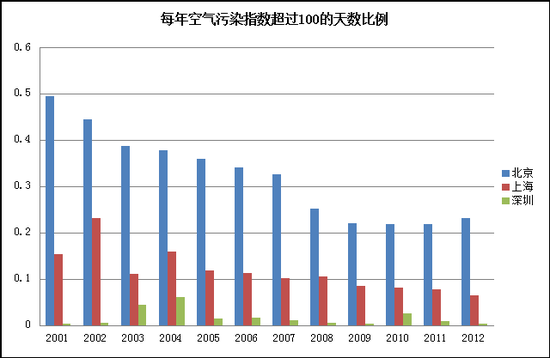 Some studies have pointed out that my country’s air quality report may have a downward trend at the critical value of pollution. Manipulation (Andrews, 2008, Chen, Jin, Kunar and Shi, 2012, Ghanem and Zhang, 2014). Our sample period was longer than the above-mentioned study, and similar evidence was also found. For example,

We drew a frequency chart of Beijing’s daily air pollution index from 2001 to mid-2012: 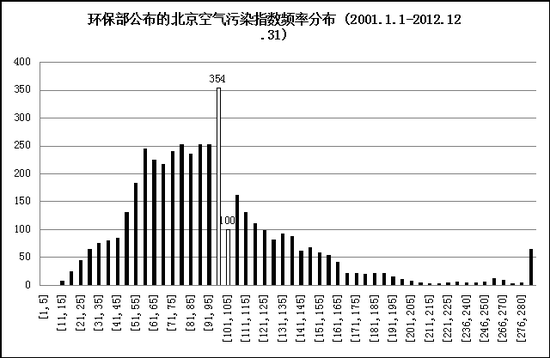 For the original text, please refer to: Particles, Pollutions and Prices, Hu, Li and Lin,