Last year, the normal rate of Daxing Airport's clearance reached 94.38%, ranking first among the major airports in the country

Original title: Daxing Airport's "friend circle" is bigger on the first anniversary of the operation | Looking back at the 13th Five-Year Plan Source: The Beijing News

In June of this year, Daxing Airport launched the “Discover the World” tourism project. Tourists can visit the “first line, one city,” “dandelion,” and “Jianjia” in the terminal building. There are more than 10 public landscape facilities such as "Huajianji-Peach Blossom".

In the long holiday of "October" just past, Daxing Airport completed a total of 741,700 passenger throughput and guaranteed 5,313 flights.

From 2016 to October 2020, a total of more than 3000 Daxing registered labors have achieved employment at Daxing International Airport.

On October 25, Beijing Daxing International Airport ushered in a new winter and spring flight season, which is the fourth large-scale transfer so far.

Since it was officially put into operation on September 25 last year, this steel phoenix has ushered in a number of bright moments: becoming a "net celebrity check-in place" and passenger throughput The national flag raised in Tiananmen Square, which exceeded 10 million for the first time, is permanently displayed here...

For passengers, a more direct experience is to take a flight here Getting in and out of Beijing is more convenient. 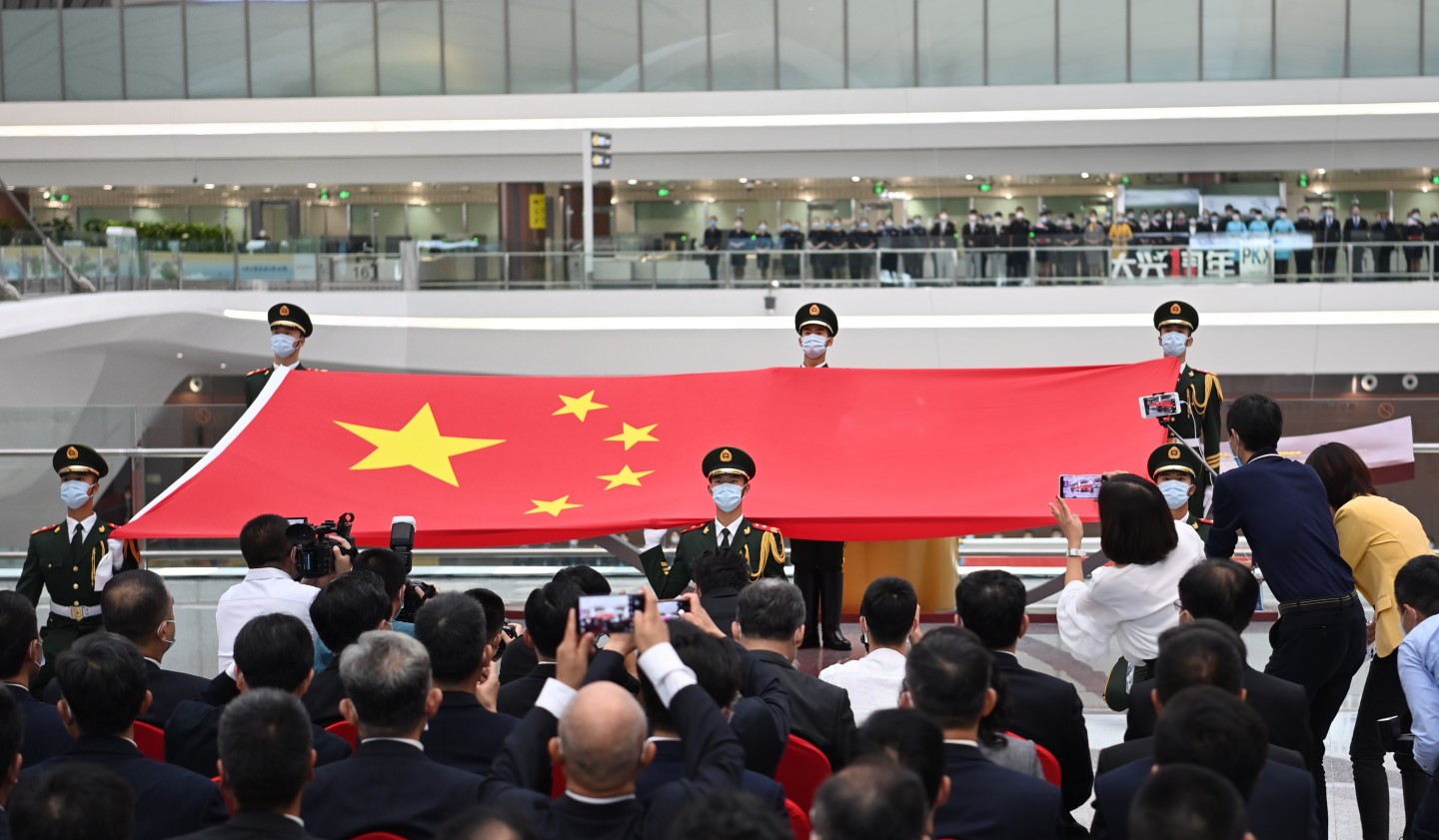 Coming into operation Since then, Daxing Airport has become an Internet celebrity check-in place with high-tech connotation and stylish appearance. Especially during the National Day holiday of last year, when the ratio of tourists to tourists reached 23:1 at the peak, the airport had to temporarily increase staff to maintain tourist sightseeing order.

Nowadays, the landscape of Daxing Airport is more abundant, and it also has the "temperament" of scenic spots. A total of 38 landscape and public art facilities have been set up in the terminal building, and various cultural performances such as "Window of National Treasures", "Cultural Art Corridor" and "New Year's Concert" have been carried out to create a new experience of waiting for the flight one step at a time.

In June of this year, Daxing Airport also launched the "Discover the World" tourism project. Tourists can book tours through mini programs and visit the terminal under the leadership of professional guides. The "net celebrity" attractions in the public area of ​​the building include more than 10 public landscape facilities such as "first-line, one-city", "dandelion", "Jianjia", "Huajianji-Peach Blossom", "Chinese Character Xingxiang", and "Guomen Impression".

The tour guide of "Discover the World" tourism project Chen Yani told reporters that the project was temporarily suspended due to the epidemic, but as the epidemic was brought under control, the number of tourists gradually increased. "In the past few days, many units have made reservations for group tours, and some units have come in batches two or three times." Chen Yani said, in addition to the group tours booked in advance, tour guides often encounter tourists who come in temporary groups. It will temporarily arrange time to provide explanation services.

Now, when tourists arrive at Daxing Airport by plane, they have the opportunity to appreciate a special national flag, which was raised in Tiananmen Square on September 25 last year. . 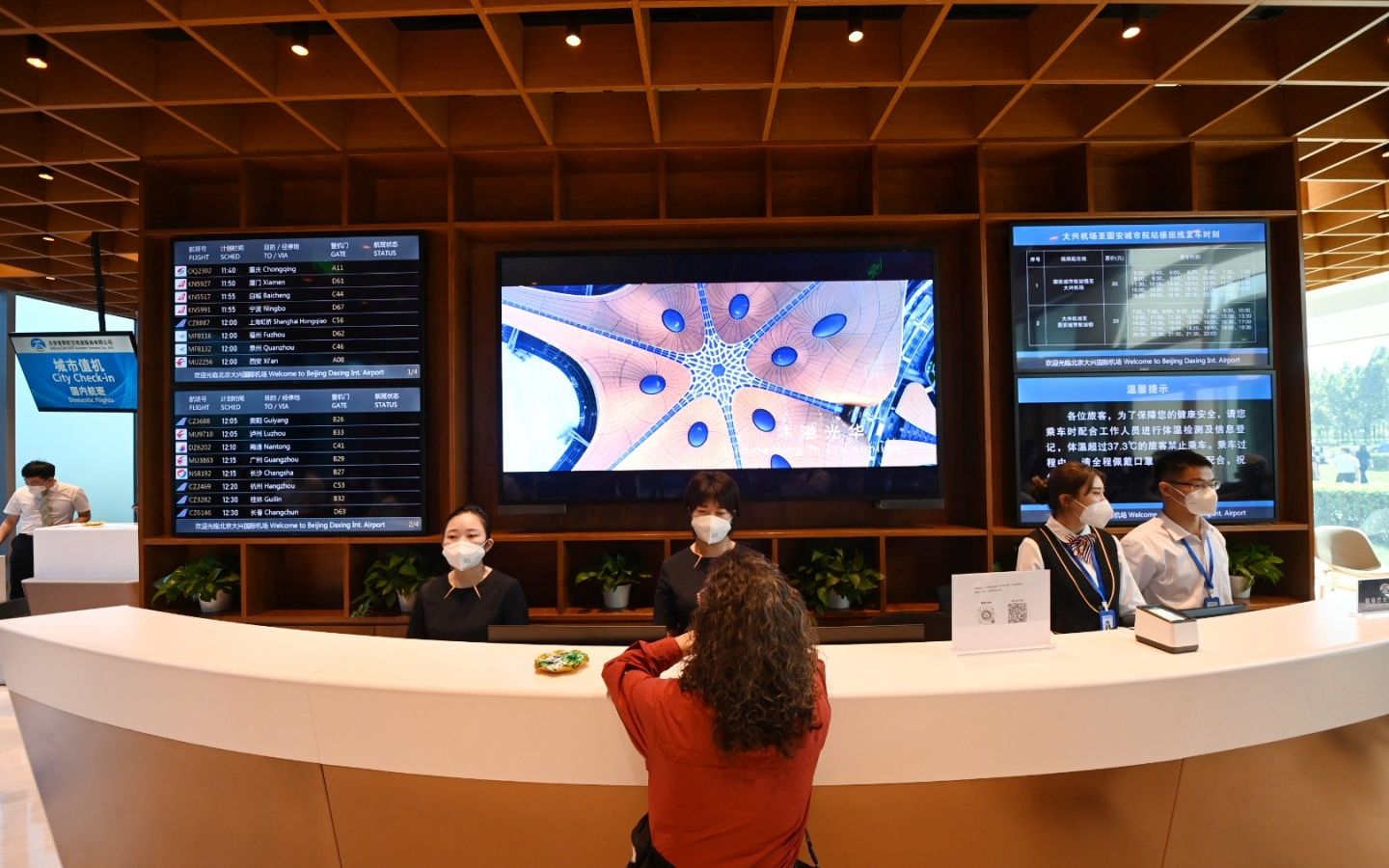 are going through the formalities. Photograph/Beijing News reporter Tao Ran

Smart travel and convenient travel have always been one of the labels of Daxing Airport. At present, Daxing Airport has fully realized face recognition, and passengers can swipe their faces through security check and board the plane.

It is estimated that before the end of this year, Daxing Airport will usher in version 2.0 of face-swiping boarding, that is, the "One ID full-process face-swiping clearance" function. "The biggest advantage of this feature is that in the future, passengers can complete their face identification verification at home. After arriving at Daxing Airport, even if they forget to bring their ID card and do not have a check-in voucher, they can scan their faces to complete all boarding procedures. Kong Yue, deputy general manager of Daxing Airport, introduced.

In addition to smart travel, it is also more convenient for passengers to depart from Daxing Airport. At present, Daxing Airport has two city terminals, namely Beijing Caoqiao City Terminal and Hebei Gu'an City Terminal. Passengers can go through the check-in and baggage check-in procedures at the city terminal, and then take the airport express train or airport bus empty-handed to arrive at the airport, eliminating the need for dragging luggage up and down stairs, security checks and many other links. The jobs of Zhang Da and Xie Songyan are related to Daxing Airport. Zhang Da works as a HR specialist for a human resources company that recruits staff for Daxing Airport, and Xie Songyan is Beijing Eastern Airlines Food courier. Before Daxing Airport was put into operation, they, like many young people, wanted to leave Daxing and venture into Beijing city. After working hard and coming back, I found homeThe airport at the door has been established, and many positions are "exclusively" recruited for villagers in the surrounding 7 towns: Yufa, Panggezhuang, Weishanzhuang, Anding, Changziying, Caiyu, and Lixian.

In fact, when Daxing International Airport was completed and opened to air traffic, Beijing and Daxing District introduced many employment policies, using airport posts to feed back losses due to airport construction. Farmers arable land.

Zhang Da and Xie Songyan seized the opportunity, successfully passed the interview, and found their favorite job at home.

Now, Zhang Da stays at home with his parents, sleeps until he wakes up naturally, eats early, and then goes to work easily, no longer the same as before Share rent with others, squeeze the bus to go to work early in the morning. Xie Songyan no longer has to "cross" from the South Sixth Ring Road to the North Fifth Ring Road in order to commute. The cost of going to work is greatly reduced.

The Beijing News reporter learned from Daxing District that from 2016 to October 2020, the district has promoted 84,917 labor employment, and there are more than 3,000 Daxing registered laborers in Daxing. Employment at international airports. 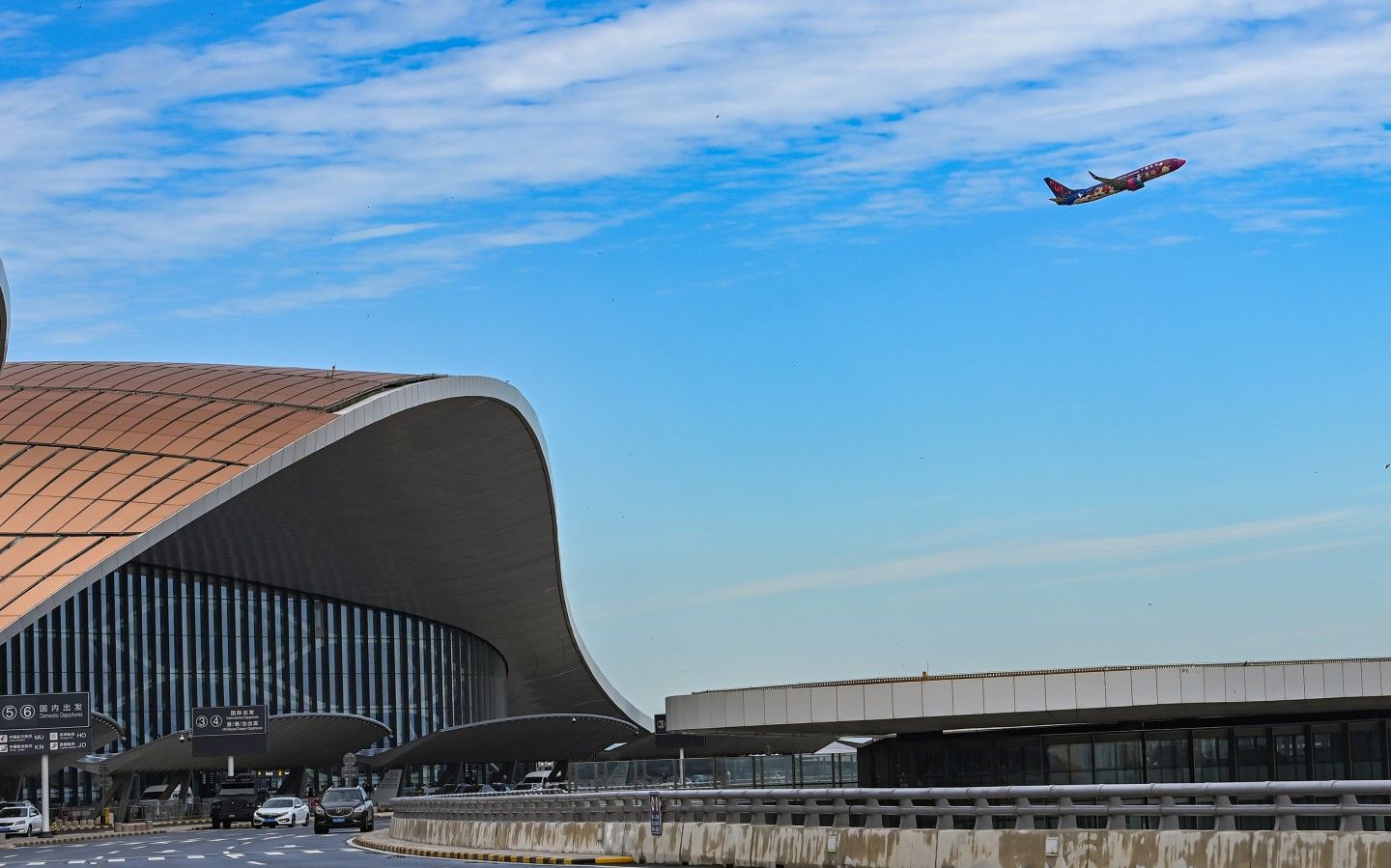 On August 24, a passenger plane took off from the west runway of Daxing Airport. Photograph/Beijing News reporter Tao Ran

The taxi time of Daxing Airport flights is shortened by 1-3 minutes, and passengers will feel better when traveling

The Beijing News: Daxing Airport has been in operation for a year. What do you think is the biggest change?

Yan Xiaodong: In the preliminary preparations for the construction and commissioning of Daxing Airport, airspace optimization is a prerequisite that must be met, which has also driven other areas in North China and even the whole country. The regional airspace is optimized, which has played a very important role in the guarantee of national air transportation and the improvement of transportation capacity.

The Beijing News: From the perspective of passengers, what changes will the airspace optimization of Daxing Airport bring to travel?

Yan Xiaodong: After Daxing Airport was put into operation, the number of destinations has increased, which means that passengers can choose more travel destinations. At the same time, the operation of Daxing Airport has improved the overall flight protection capabilities, and passengers have received more benefits, and airlines will also benefit from it.

The current operating status of Daxing Airport has certain advantages compared with Capital Airport, and passengers may have some obvious feelings. For example, in the first year of operation, the flight normality of Daxing Airport is significantly higher than that of other airports in the Beijing-Tianjin-Hebei region, and the taxiing time of outbound flights is 1-3 minutes shorter than that of airports of the same construction scale. This time is very remarkable. If each flight can be shortened by about 3 minutes, then there will be 600 or 700 flights a day, which can save a lot of time, and passengers will have a better travel experience.

This achievement is mainly due to the fact that Daxing Airport is an airport that was planned at one time and constructed in batches. During the planning process, how to shorten various processes was considered. For example, the “selling point” of the terminal building is that it only takes 8 minutes to walk from the central point to the farthest boarding gate. So in terms of taxiways, reducing crossings, reducing runway incursions, and reducing the risk of crossing the runway are also reflected in the flight zone planning process. Therefore, with an increased safety margin, Daxing Airport can operate a larger number of aircraft.

Beijing News: On the first anniversary of the operation, the cumulative flight departure normal rate of Daxing Airport reached 93.66%, the normal clearance rate 94.38%, and the normal takeoff rate 91.34%, of which The normal rate of clearance ranks first among the major airports in the country. What is the reason for this achievement?

Yan Xiaodong: On the one hand, it is because the scale of construction of Daxing Airport can serve more flights, but it is still in a transitional stage, and the number of flights is much lower than the scale of airport construction. , So there is plenty of room for Daxing Airport to serve these flights at this stage. On the other hand, because Daxing Airport is an airport that has just started, it needs differentTherefore, the civil aviation management system has given more cooperation and support in flight operations.

Before Daxing Airport was put into operation, the capacity of Capital Airport had already exceeded the design scale, and it had been operating under the “ceiling”, so the normality of flights was not satisfactory. . Daxing Airport is just the opposite. The construction scale is much larger than the current actual operation scale, so it has performed well in the past year.

Beijing News: The east and west towers of Daxing Airport have been officially put into operation. What are the advantages of the twin tower operation for flight operation and passenger travel?

On the other hand, in the near future, the operation of the twin towers means that during the peak period of flight operations, the two towers can open more controller seats and take better care of them. The immediate or nearby runway plays a great role in ensuring the safety of flights; in the long run, the twin towers operate at the same time to ensure a greater number of flights at the airport. For example, when there are more than 1,200 flights per day, the twin towers Will play its significant role.