In February 2020, according to related reports, due to pressure from the Trump administration, the Ukrainian government may suspend the acquisition of Ukrainian Madasi by Chinese investors, and the U.S. Oriole Capital Group will take over.

On June 18, 2020, the National Anti-Monopoly Commission of Ukraine issued a new round of feedback.

On August 4, 2020, in view of the changes in the basis of business cooperation between Beijing Tianjiao and its subsidiaries and Ukrainian defense industry state-owned Konzern Company,

Beijing Tianjiao and Ukraine DCH The group and its affiliated companies signed a cooperation agreement on the Madasiqi project, hoping to promote overseas anti-monopoly approval work through the change of partners.

On August 4, 2020, Beijing Tianjiao withdrew to the Anti-Monopoly Commission the antitrust application that it had previously filed with the Ukrainian defense industry state-owned Konzern Company; on the same day, Beijing Tianjiao and Ukraine DCH Group and its affiliated companies jointly submitted a new antitrust application to the Ukrainian Anti-Monopoly Commission.

On August 31, 2020, the Ukrainian Anti-Monopoly Commission officially rejected Chinese investors’ Acquisition. The President of Ukraine Vladimir Zelensky instructed Prime Minister Denis Shmigar to take measures to protect Ukraine’s economic interests and to assess the impact on the sale of strategic enterprises, especially the shares of Madasić. 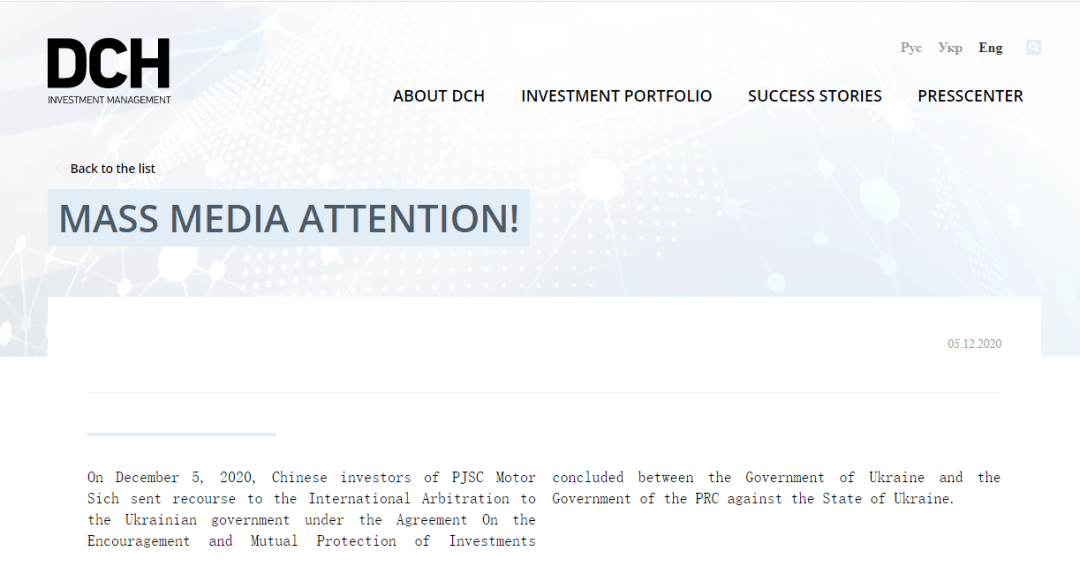 September 23, 2020, Beijing Tianjiao and DCH Group and their affiliates The company once again submitted an anti-monopoly application to the Ukrainian Anti-Monopoly Commission; on October 23, 2020, after fully considering the opinions of the Ukrainian Anti-Monopoly Commission, the two parties submitted another anti-monopoly application.

On November 19, 2020, Beijing Tianjiao refused to accept the review of anti-monopoly applications on the alleged misapplication of legal basis and legal procedures by the Ukrainian Anti-Monopoly Commission Matter, file a lawsuit in the Ukrainian District Court.

The "China-Ukraine Bilateral Investment Agreement" entered into force on May 29, 1993, which stipulates that investors canAny disputes over the amount of compensation for expropriation" shall be submitted to the ad hoc arbitration tribunal.

Any disputes over the amount of compensation collected

can be submitted to the arbitration tribunal.

2. The arbitration tribunal shall be established on a case-by-case basis in the following manner: each party to the dispute shall appoint an arbitrator, and the two arbitrators shall elect a third country national who has diplomatic relations with both contracting parties as chief Arbitrators. The first two arbitrators shall be appointed within two months from the date the dispute is submitted to arbitration in writing, and the chief arbitrator shall be elected within four months. If the arbitration tribunal has not yet been formed within the prescribed time limit, any dispute One party asks the chairman of the Arbitration Court of the Stockholm Chamber of Commerce to make the necessary appointments.

3. The arbitration tribunal shall formulate its own procedural rules, and arbitration in this case The tribunal can refer to the rules of the Arbitration Institute of the Stockholm Chamber of Commerce when formulating procedures.

4. The arbitral tribunal’s award shall be made by a majority of votes. The award is final. It is binding on both parties to the dispute. Each contracting party shall be obligated to enforce the award of the arbitration tribunal in accordance with its own laws.

5. The arbitration tribunal shall be based on this The provisions of the agreement, the laws and regulations of the contracting party that invests in its territory (including its conflict norms) and the generally recognized principles of international law make a ruling.

1. Investors of one contracting party Investment in the territory of one party shall not be nationalized, expropriated, or other measures similar to nationalization and expropriation (hereinafter referred to as “expropriation”) shall be adopted on it, unless it is necessary for the public interest to comply with the procedures established by law in a non-discriminatory manner. Such measures can only be taken on the basis of sex and compensation.

2. The compensation specified in the first paragraph of this article shall be calculated on the basis of the actual value of the investment on the day of expropriation. The payment of compensation shall not be unreasonably delayed. It shall be convertible and freely transferable from the territory of one contracting party to the territory of the other contracting party.

3. Investors of one contracting party make investments in the territory of the other contracting party if it is due to war, emergency, domestic riots and other similar circumstances In the event of losses, if one of the contracting parties investing in its territory adopts compensation for losses or other relevant measures, the treatment it accords to the investor shall not be less than that accorded to any third-country investor.

According to DCH Group’s statement, Chinese investors will be composed of WilmerHale, DLA Piper and Bird&Bird. The representative of an international law firm, Ukrainian law firm Arzinger, will act as Ukrainian legal counsel.

Editor of this article / Huang Keer