This article is from the WeChat public account "Ping An Research". The views in the article do not represent the views of Zhitong Finance.

HUD is an important function of the smart cockpit. HUD is a Heads Up Display, which displays important driving information on the front windshield in real time to avoid potential safety hazards caused by the driver’s head down and the diversion of sight. HUD can be divided into C-HUD, W-HUD and AR-HUD. W-HUD directly uses the windshield of the car as a display device, and the display effect is more integrated. At present, W-HUD is the most widely used. AR-HUD is the future direction of development. From a functional perspective, when the HUD matures in the future, it may replace the existing LCD instrument. In the short to medium term, the LCD instrument and the HUD will coexist for a period of time. For the entire vehicle, the value of the bicycle will increase.

It is estimated that the installation penetration rate will reach 25% by 2025, and the market space will be nearly 10 billion. According to the data of the Gaogong Intelligent Automobile Research Institute, from January to April 2020, the number of new cars equipped with HUD is 127,600 units, an increase of 41.94% year-on-year. The loading rate rose to 2.86%. We predict that by 2025, the installation penetration rate will reach 25%, with a market space of nearly 10 billion.

The windshield is one of the important upstream components of HUD. The windshield and the projection unit composed of light source module, reflector, projection mirror, adjusting motor and control unit are the core components of HUD. The HUD control unit obtains vehicle speed, navigation and other information from the vehicle data bus. And output the image on the projector. HUD windshield is different from ordinary windshield, mainly because the PVB film inside the interlayer is wedge-shaped, that is, the glass has a thick top and a thin bottom to prevent image ghosting.

Investment advice. HUD is an important manifestation of intelligence. HUD can help the driver keep his eyes straight ahead, avoiding the potential dangers that may be caused by frequently looking down at the instrument. In addition, HUD can focus on displaying more traffic information and human-computer interaction More abundant. At present, HUD has entered a stage of rapid application. We estimate that the domestic penetration rate is expected to reach 25% in 2025, and the market size is close to 10 billion yuan. HUD has high technical barriers. Tier1 companies need to have better system integration capabilities, and upstream companies need to have single product technical advantages. It is recommended to deepen the automotive glass industry and lead the automotive glass industry in the field of intelligent and multifunctional glass-Fu Yao Glass (03606), pays attention to the outstanding domestic HUD enterprises, and has successively obtained new orders and is about to mass-produce the industry leader-Huayang Group.

HUD is an important function of the smart cockpit.

HUD is a Heads Up Display, which displays important driving information on the front windshield in real time to avoid potential safety hazards caused by the driver's head down and diversion.

C-HUD is also called combined HUD. Its display screen is a piece of transparent resin glass placed on the top of the instrument. The glass can be adjusted according to the imaging conditions.Carry out special treatment. In the past few years, the main form of after-mounted HUD was C-HUD.

W-HUD directly uses the windshield of the car as the display device, and the display effect is more integrated. W-HUD has higher requirements on the software technology and hardware equipment of the projection unit. The windshield The manufacturing difficulty is also higher. In recent years, the cost of W-HUD has been reduced, and it has been installed on mid-end models, and will further sink to mid- and low-end models in the future. W-HUD is currently the most widely used.

AR-HUD is an extended application of AR technology, such as real-time display of navigation information on the HUD, and virtual display of actual road conditions, which is more vivid, but it is expensive and difficult to popularize. AR-HUD is the future direction of development.

From the perspective of function, when the HUD matures in the future, it may replace the existing LCD instrument. However, in the short to medium term, LCD instruments and HUD will coexist for a period of time, and the value of bicycles will increase for vehicle companies.

The HUD front-loading rate has increased significantly, and the market space is large.

We predict that by 2025, the penetration rate of installations will reach 25%, and the market space will be nearly 10 billion yuan. According to the data of the Gaogong Intelligent Automobile Research Institute, from January to April 2020, the number of new cars equipped with HUDs is 127,600 units, an increase of 41.94% year-on-year. The number of front-mounted vehicles and the growth rate are further enlarged. The rate rose to 2.86%. Gaogong Intelligent Automobile Research Institute predicts that as more HUD models are launched in the second half of this year, the pre-installation rate will continue to rise rapidly, and it is expected that the installation rate will exceed 10% by 2022. We predict that by 2025, the domestic penetration rate of pre-installation will reach 25%, with a market space of nearly 10 billion yuan. 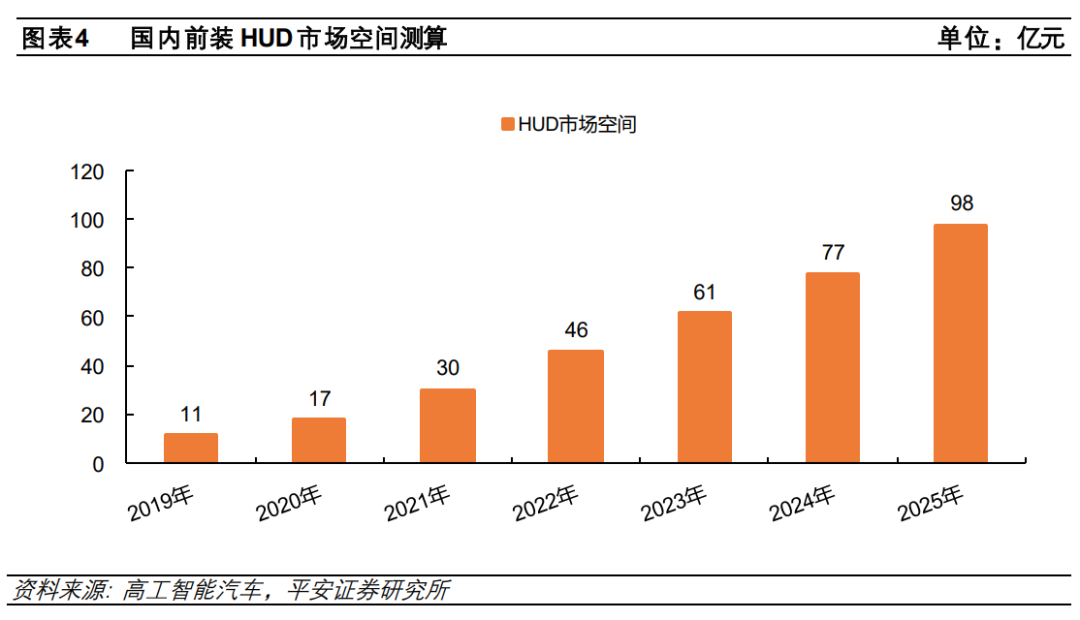 Japan leads the development of HUD.

Japanese brands have the highest amount of HUD. According to the data of Gaogong Intelligent, among the top 20 models with HUD on-risk vehicles from January to April 2020, Toyota Camry has a clear lead, and Hongqi HS5 ranks second in W-HUD on-risk vehicles. Some brands (especially BBA) only offer optional equipment, with prices ranging from several thousand yuan to ten thousand yuan. 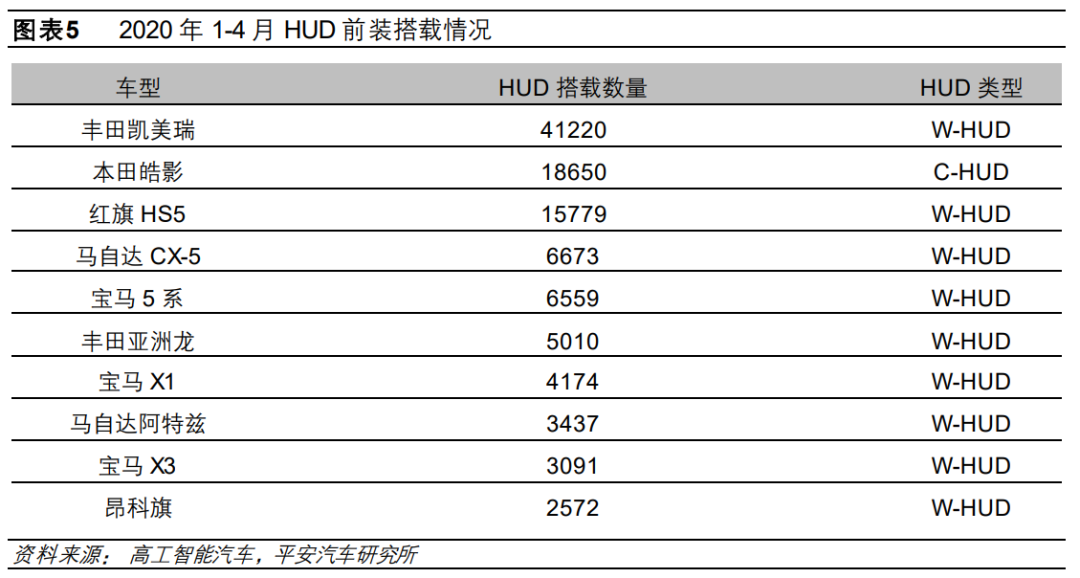 OEMs have a strong willingness to carry HUD as a product highlight to enhance the competitiveness of models. HUD was initially used in luxury cars such as Mercedes-Benz and BMW. In recent years, with the gradual reduction in cost, HUD has been used in mainstream models of about 200,000 yuan. In addition, Volkswagen ID 3 plans to be equipped with AR-HUD function, Great Wall Motors and Geely Automobiles Other domestic brands will also install W-HUD in new models. We expect that in 2021, the number of HUDs of independent brands will increase rapidly.

The consumer acceptance is good, and it is greatly affected by the HUD display content and display effect. According to our offline research, the contents displayed by the HUD of different models are quite different. Some only display vehicle speed information, and some can display road, navigation, assisted driving and other information. In addition, some HUDs currently have a potential problem of dizzying consumers. Therefore, consumer acceptance of different products varies.

2. HUD will drive the upstream development of the industry chain

The technical principle of HUD is mainly optical reflection.

The principle of HUD is: the light information is emitted by the light source module, through the reflector, lens and windshield, the human eye can see the virtual image located 2-2.5 meters in front of the eye, suspended in the front On the road, or combined with the road as a whole, to provide users with a better visual experience.

Windshield and projection unit are the core components in the upstream industry chain.

The upstream of HUD is divided into hardware and software services. The hardware includes windshields, light source modules, displays, lenses and image processing chips, and the software includes maps, navigation and optical software. 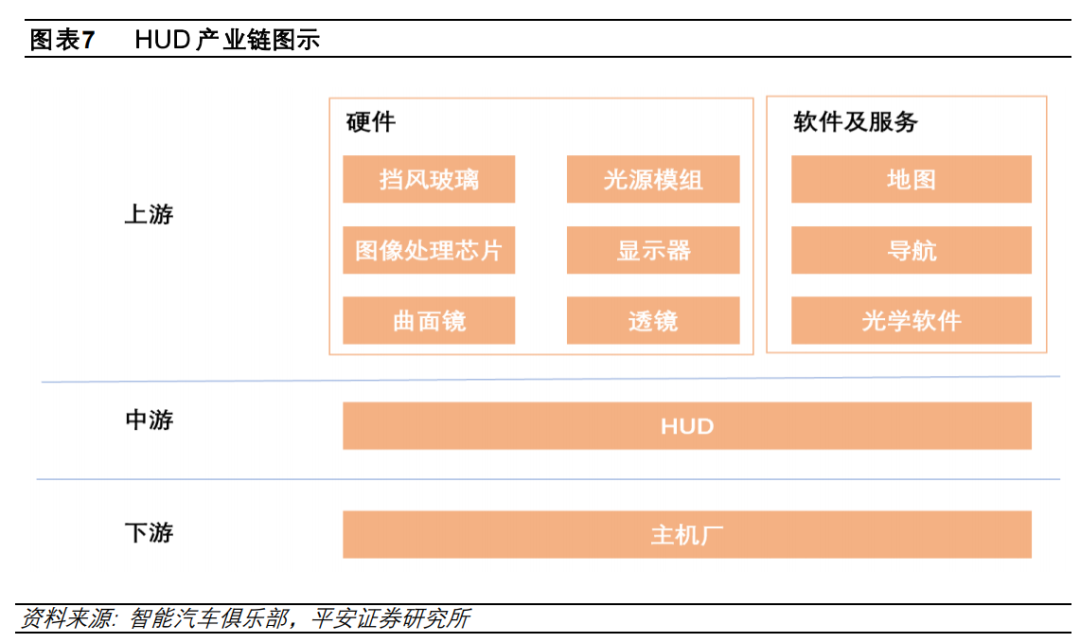 Mainland Germany: The company began producing full-color HUDs in 2003. In 2010, the second-generation HUD was dedicated to supplying an important part of the human-machine interface of Audi A6/A7/A8, BMW3, and Benz C-class luxury cars. In 2014, the HUD upgraded version of the AR HUD human-vehicle dialogue interface was launched. In December 2016, it invested and strategically formed an alliance with Digilens of the United States and committed to launching a lighter, thinner, larger image size, and lower cost HUD.

Huayang Group: Huayang is a private enterprise established in 1993. The company’s products are divided into four categories: automotive electronics, precision die-casting, precision electronic components, and LED lighting components. Among them, automotive electronics includes smart cockpits and ADAS , HUD products belong to the smart cockpit business segment. The company established a HUD team in 2012. According to the prospectus information, the first utility model patent was obtained in 2013. Up to now, it has a number of HUD related patents.

The company’s W-HUD product has been launched on the market with a model of Dongfeng Nissan for mass production, and has obtained a number of designated projects from domestic and overseas car companies; DLP AR-HUD is expected to begin mass production by the end of 2021 Models are available.

Fuyao Glass: The company is the leader in automotive glass, with a relatively high R&D expense rate for many years, and its new technology Deep accumulation: 1) Intelligent glass represented by HUD, dimming glass, glass antenna, etc.; 2) Personalized glass represented by heat insulation, water repellency, heating, solar energy, etc.; 3) Panoramic sunroof and sky curtain . The company recently strengthened cooperation with BOE and Beidou Intelligent in smart car windows to empower glass. The company's R&D expense ratio is relatively high and it has long-term technology accumulation. With the accelerated deployment of HUD in the short term and the medium and long-term 5G Internet of Vehicles application background, the company, as an industry leader, will benefit from the increase in the value of bicycles brought about by industry changes. 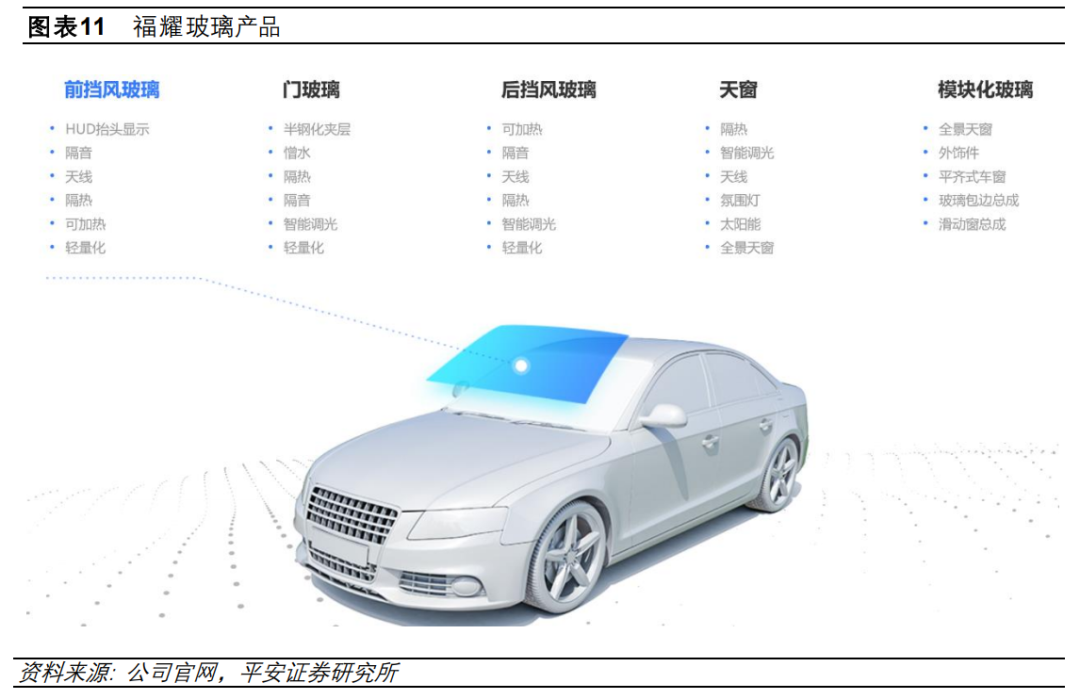 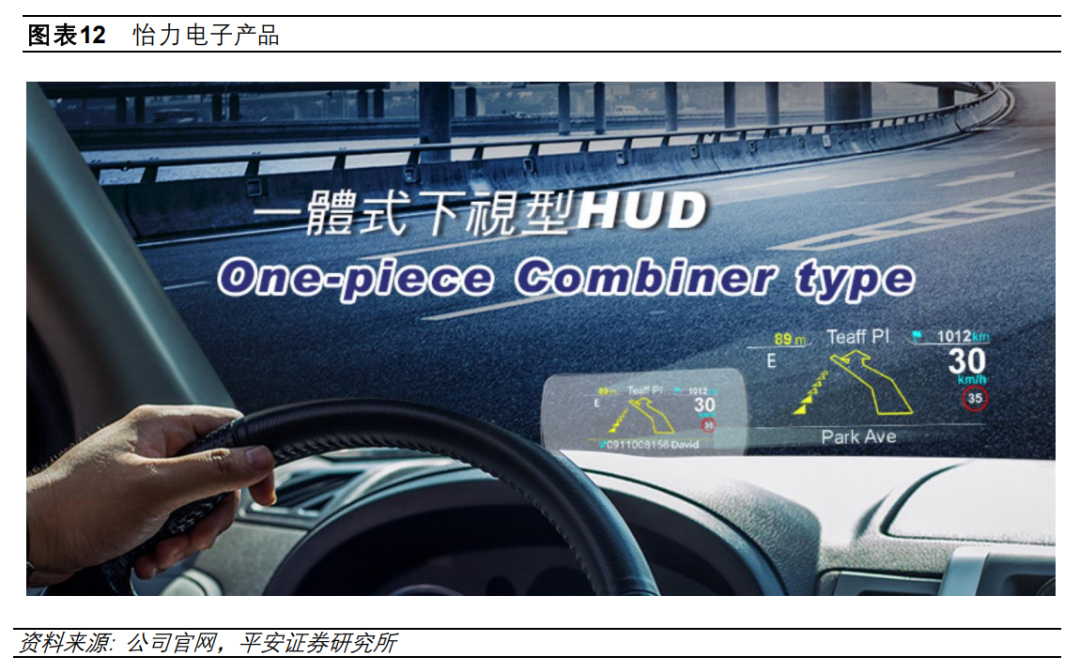 HUD is an important embodiment of intelligence , HUD can help the driver to keep his eyes straight ahead and avoid potential hazards that may be caused by frequently looking down at the instrument. In addition, the HUD can focus on displaying more traffic information and richer human-computer interaction.

At present, HUD has entered the rapid responseAt the stage of application, we estimate that the domestic penetration rate is expected to reach 25% in 2025, and the market size is close to 10 billion yuan.

HUD has high technical barriers, tier1 companies need to have better system integration capabilities, upstream companies need to have single product technology advantages, it is recommended to deepen the automotive glass industry and lead in the field of intelligent and multifunctional glass Fuyao Glass, the leading automotive glass company in China, pays attention to the outstanding domestic HUD enterprises, and has successively obtained new orders and is about to mass-produce the industry leader-Huayang Group.

1) HUD penetration rate is not as good as expected;

2) The auto industry is not recovering as expected;

3) The health incident has continued to affect the economy, and consumer confidence is suppressed;

4) The cost of HUD has fallen less than expected.