After a turbulent year, the core assets of A-shares, led by Kweichow Moutai, Ping An of China, and China Merchants Bank, have performed extremely well, with a market value of over 100 billion shares reaching 60%. The market value of core assets held by Beijing Funds accounted for Half of the country, performance contribution is also increasing year by year. Under the influence of many positive factors, such as the economy's high-quality development stage and the gradual increase of foreign voices in A-shares, the value of investment has become more prominent.

In 2019, Databao passed the market value performance scale, industry status, and corporate governance of listed companies in 2019 The level and other indicators selected 50 stocks with strong investment value as the core asset portfolio. After a year of volatile market conditions, the core asset stocks have withstood many tests and performed smoothly in terms of performance, market value, and foreign holdings.

On the first day of 2020, DataBall and Fong Shun jointly released the 2020

"Top 50 A-Share Core Assets". This list excludes the original from the perspectives of comprehensive market value, annual performance, and performance. 5 companies in the constituent stocks, and according to this condition include 5 high-quality stocks.

and Zhejiang Dingli, the adjustment will be officially effective on January 2, 2020. The performance of the "Top 50 Core Assets" in 2019 was very strong, with steady growth in performance and a very stable return on net assets.

The cumulative increase of core assets in 2019 exceeds 60%

From the perspective of market performance,

The "Core Assets 50 Index" has a cumulative increase of 62.07 in 2019. %, outperformed the same periodShanghai Composite Index

38.35 percentage points. Not only is it outperforming the Shanghai Stock Exchange Index, the latter is still slightly inferior compared with the world-leading SZSE Component Index. The "Core Asset 50 Index" outperformed the Shenzhen Component Index by 18% over the same period.

From the perspective of constituent stocks, only Yonghui Supermarket, China Railway Construction and Baosteel shares fell slightly. Luxshare Precision, Muyuan, and Wuliangye dominated the top three gains in 2019, all exceeding 150%. The newly included constituent stocks Kangtai Biotechnology and Shennan Circuit all increased by more than 100% in 2019, while Lianmei Holdings, Zhejiang Dingli and Kouzijiao all increased by more than 60% in 2019. 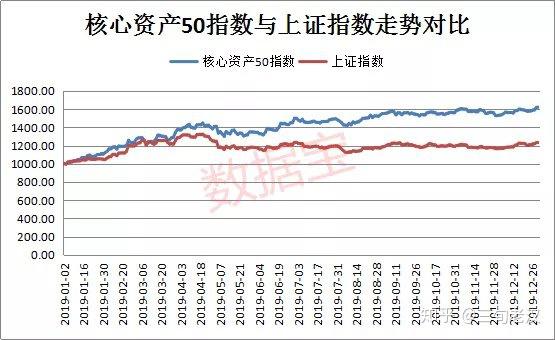 Since Beishang Funds entered the A-share market, they have invested Preference is very stable, insisting on making investment value, and the core assets are more consistent with the interest of Beijing Capital. Data treasure statistics show that since 2019, the total market value of the "Top 50 Core Assets" held by Beijing Capital has steadily increased from 450 billion to more than 740 billion.

Judging from the ratio of the market value of the core asset stocks held by Beijing Capital Funds to the total A stock market value, it has stabilized at more than 50% in 2019, which means that

Judging from the latest shareholding ratio, Beijing Capital Capital holds Shanghai Airport, MideaThe proportion of 9 shares such as the Group and Gree Electric Appliances exceeds 10%. Compared with the end of last year,

80% of core asset stocks have been increased by funds from the north,Opai Home Furnishing

and other 5 stocks have increased their shareholding ratios. More than 5 percentage points.

New advances are included in the five stocks. Kouzijiao, Zhejiang Dingli and Shennan Circuit have acquired Beijing Capital’s holdings with a market value of over 1 billion. Kouzijiao and Zhejiang Dingli, which hold a larger share, are both More than 4.5%.

Not only is the influence of core assets in A-shares reflected In terms of market value, its performance influence is gradually increasing. As of the first three quarters of 2019, the total operating income of the "Top 50 Core Assets" reached 5.11 trillion yuan, accounting for 14.18% of all A-share revenues. The first three shares of China Construction, China Ping An and China Railway Construction Both exceed 500 billion.

The net profit of core assets has steadily increased in recent years.

Outlook: the strong will remain strong, the core assets are still attractive

In the past 2019, The A-share market has attracted many foreign investors with extremely low valuations. "Investment", "Investment", "S&P Dow Jones" followed one after another, and the market of technology stocks continued throughout the year. Looking forward to 2020, although the A-share market is free of gunpowder and there are many investment opportunities, it is also full of many unknowns.

With the advancement of the deep reform of the capital market, the delisting system has become more complete and the supervision has become more stringent. The strong are always strong, and the competitive landscape is already obvious. The “Top 50 Core Assets” have performed extremely well regardless of whether they are in a slump or a volatile market.

In the environment of science and technology, innovation and reform will become the key to the progress of the capital market and even the country.

From an internal point of view, core assets lead the A-share market in terms of profitability, innovation, and return on investment. Nearly half of core asset stocks are valued at less than 20 times; externally, market share and foreign investment allocation are all Continue to improve.

In the future, as the A-shares further move towards a high-quality development stage, the endogenous growth capabilities of enterprises will become increasingly important to the company’s growth, and most of their core assets will be leaders in the sub-industry and have The moat effect has greater potential to grow and lead the development of the industry in the context of high-quality development.

Click on the avatar private message to communicate with me and also send a set of indicator system.