A sign of the decline of the German military? ——F-125 frigate returned to factory _ system

Original title: A sign of the decline of the German military industry? ——F-125 frigate returned to factory

In 2017, the German Defense Procurement Agency announced that the F-125 frigate’s first ship "Baden-Württemberg" would be returned to the Bross Forth Shipyard to solve the serious problems in the test. From 2018 Long-term docking began on January 19th. This is a rare record in the German navy and even in the world navy. After the sea trial, the ship cannot be handed over to the army and must be returned to the shipyard for rework. Many defense experts in Germany pointed out that the "Baden-Württemberg" class design has many thorny problems, highlighting the decline in the level of German military industry.

The F125 frigate belongs to the type of Littoral Combat Ship. The weaponry is not very strong, but it still has quality problems and returns to the factory

Since the second decade of the 21st century, based on changes in the international situation, the navies of various countries have created new demands for coastal operations, and Western navies have launched related warships. The “leader” of the traditional European military shipbuilding industry—Germany, the solution proposed for littoral operations is the F-125 frigate, which is also given the weird name “special frigate”. The biggest difference between the F-125 and the aforementioned ships suitable for littoral combat missions is that it abandons the concept of modular design and incorporates a number of special designs to meet the needs of long-term offshore deployment in littoral areas and maritime peacekeeping missions.

In June 2007, Thyssen Krupp Maritime Group, the leading German shipbuilding industry, announced that it had signed a contract with the Federal Office of Defense Technology and Procurement to build four F-125 frigates with a value of 2.6 billion euros. The first ship, "Baden-Württemberg", started construction on November 2, 2011 at the Buloss Fors Shipyard, named on December 12, 2013, and delivered in 2017.

The hull shape of the F-125 frigate is in line with the trend and adopts an invisible design that can reduce radar reflected signals, infrared radiation and noise. The ship puts special emphasis on endurance. The frigate has a full load displacement of up to 7,100 tons, which is already at the same level as the destroyer and can be described as the largest frigate in the world today. Each frigate is equipped with two groups of 105-120 crew members, which are rotated every 4 months and can be handed over within 24 hours in the overseas mission area. Compared with the F-122 frigate that needs to be replaced, the number of personnel on the F-125 frigate has been reduced by about half, mainly through a high degree of automation. In addition, a group of 50 special forces is also arranged with the ship, which can use two carrier helicopters or four hard-shell inflatable assault boats at any time. There is additional space on the ship to carry 70 more personnel.

The F-125 frigate specially selects the composite diesel-electric and gas turbine power system (CODLAG). There are 4 MTU diesel generators on board, each of which can provide 2.9 MW of electricity, and another set of output power is 20 MW. The US General Electric LM2500 gas turbine provides energy to make the speed reach 26 knots. The complete host system is integrated and provided by the German MTU company to provide related control systems. 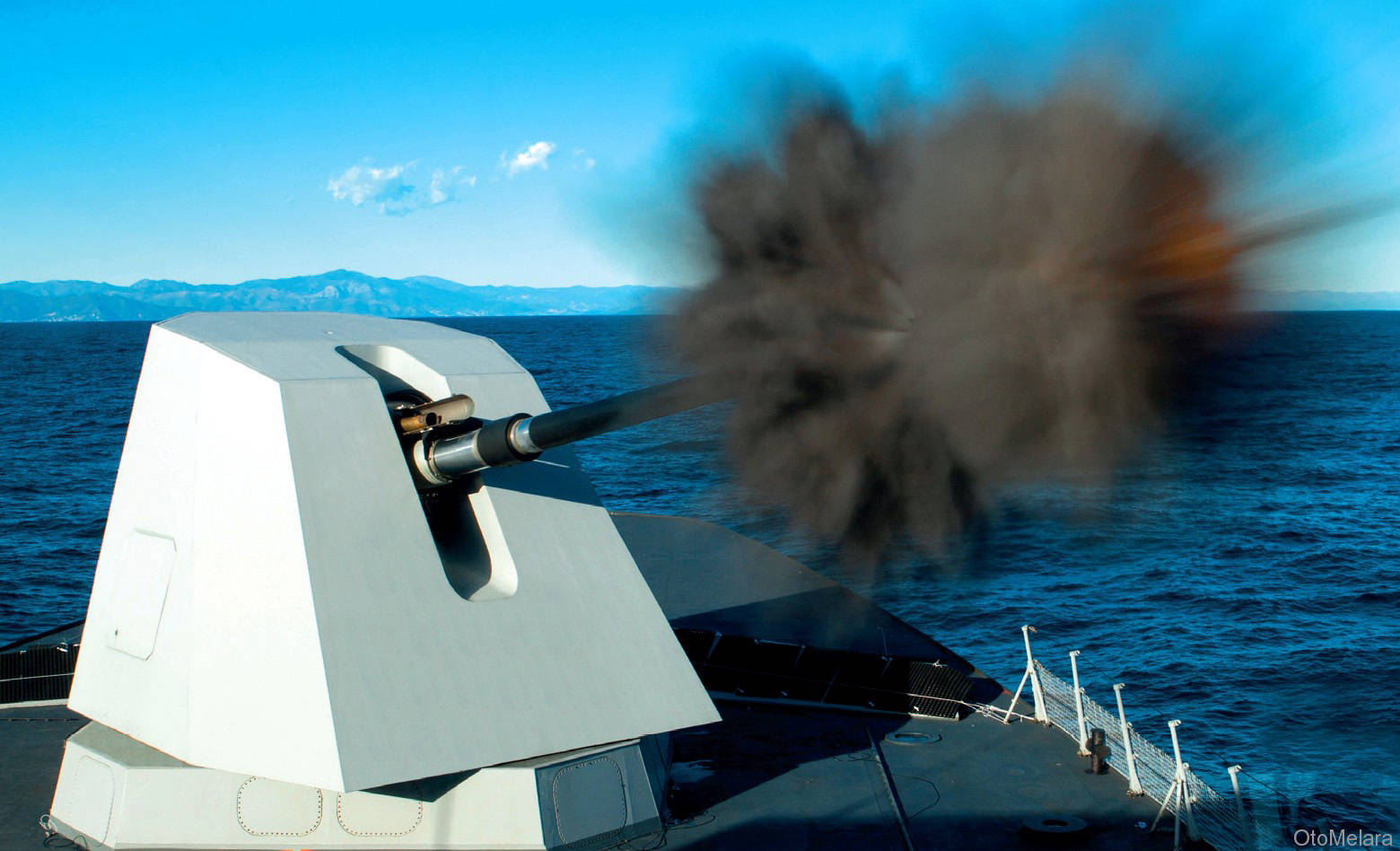 The bow of the ship has an Otto Melera 127 mm/64 caliber naval gun provided by the Italian Leonardo Group.

Thanks to the late development time, the F-125 frigate can keep up with the use of a large number of newly developed weapon systems. The bow of the ship has an Otto Melera 127mm/64-caliber naval gun provided by the Italian Leonardo Group, which can fire Vulcano projectiles with satellite guidance capabilities, with an effective range of 100 kilometers ( 54 nautical miles). The ship’s maritime combat system (ATLAS) can be equipped with advanced land-based tactical imagery and artillery weapon control systems to implement effective shore bombing operations. For inland or surface long-range strike missions, at this stage the ship is first equipped with 8 US-made "harpoons""Type II anti-ship missiles will be replaced by RBS-15 MK4 missiles of the Swedish Saber company in the future. In terms of self-defense, since the F-125 is not a professional air defense ship, the air defense firepower mainly depends on the two German-US cooperation MK44 "sea" missiles. The Ram" short-range ship-to-air missile system meets the needs. In order to deal with short-range surface targets, the ship is equipped with 5 27mm MLG remote-controlled machine guns provided by Mauser and 5 Italian-made "Strike-NT" remote-controlled weapons Station (integrated with 12.7 mm machine guns), there are also two manually operated 12.7 mm machine guns on the ship, acting as the last line of defense. In addition, the manufacturer is now considering adding some non-lethal weapons (such as water cannons, ultra-high intensity spotlights or directional sound waves) Weapons).

The F-125 frigate is equipped with the TRS-4D naval radar developed by Cassidian (part of the Airbus Group), and uses a four-sided fixed antenna instead of a rotating antenna. In addition to the radar detection system, there is the MSP 600 modular sensor platform of Rheinmetall, Germany, which is a lightweight four-axis stabilized photoelectric system that integrates a thermal imager, a daytime lens, a laser rangefinder and a dual mode Trackers are basically operated in a passive manner.

In addition, the ship is equipped with a special "Ship Infrared Monitoring, Observation and Navigation System" (SIMONE). This passive system is used for early warning and detection of small boat attacks by pirates or terrorists, mainly in ports and coasts. It works when navigating slowly in the nearby waters, and makes up for the limitation of the detection range of traditional radar due to environmental restrictions. For the electronic warfare part, the ship is equipped with the MASS decoy launch system developed by Rheinmetall, the Gedis KORA-18 integrated electronic suppression system and laser alarms. In terms of underwater detection, since the F-125 ship has no anti-submarine mission plan, it is equipped with STN Atlas Electronics’ Cerberus Mod2 close-range high-precision sonar, which is mainly used to detect obstacles or frogmen in nearby waters. It is not a high-power sonar for anti-submarine use.

Side rear of F125 frigate

Despite its beautiful paper performance, the German society was shocked after the return of the "Baden-Württemberg" to the factory. "German Association for Foreign Relations" defense industry expert Morin pointed out that Germany's military procurement has "completely become a disaster." Maureen said that the prolonged defense procurement cycle has caused many German engineers of a whole generation to have never encountered such a major defense procurement plan. They did not lose their skills, but did not learn it at all; engineering graduates do not Willing to enter the arms manufacturing industry, but prefer larger private companies with higher salaries and room for promotion.