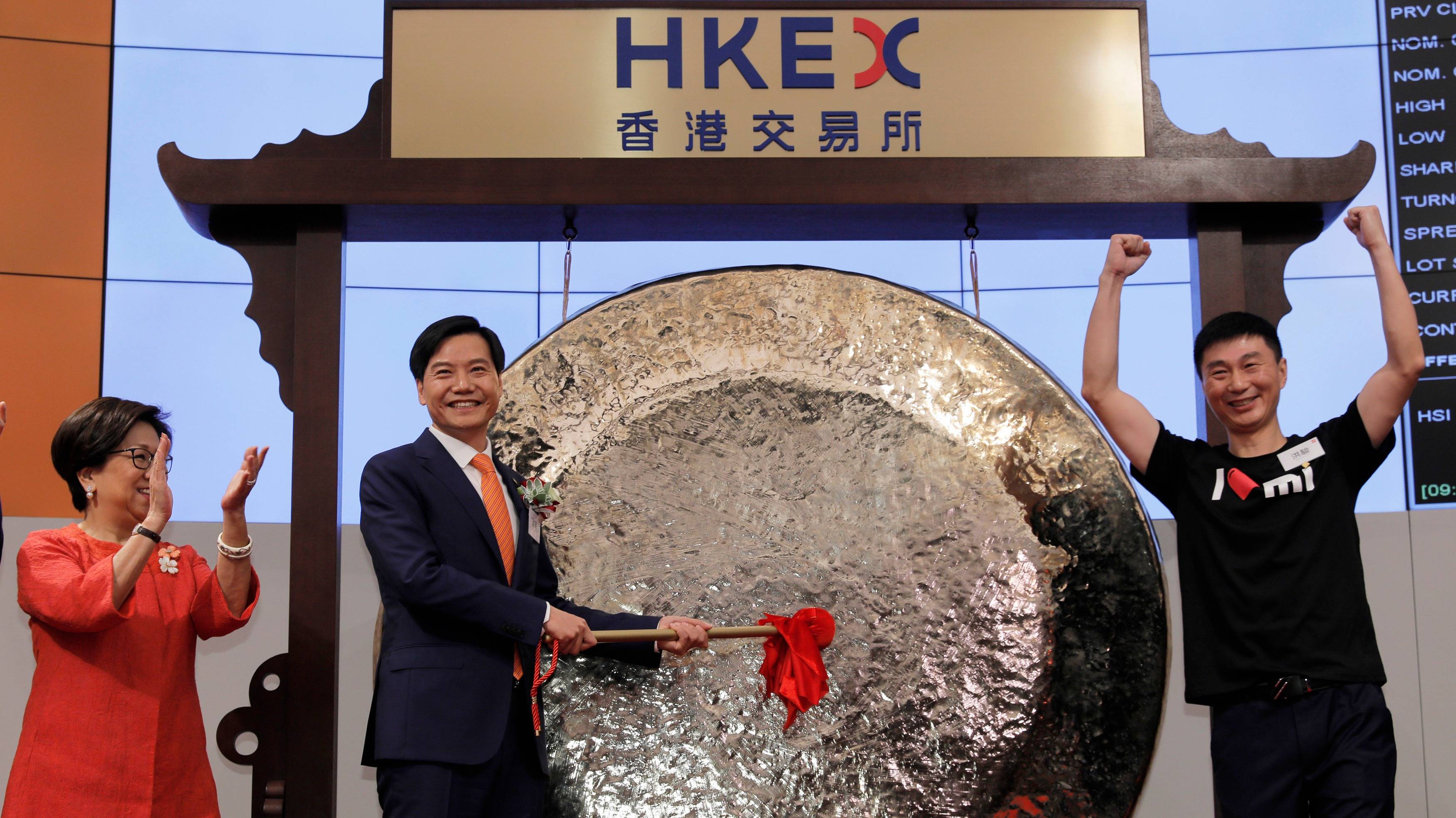 The IPO of Xiaomi and Meituan, the return of Ali, JD.com, and NetEase, the dream of "Oriental Nasdaq" on the Hong Kong Stock Exchange has revived.

This time, the scheming British may be short-sighted. 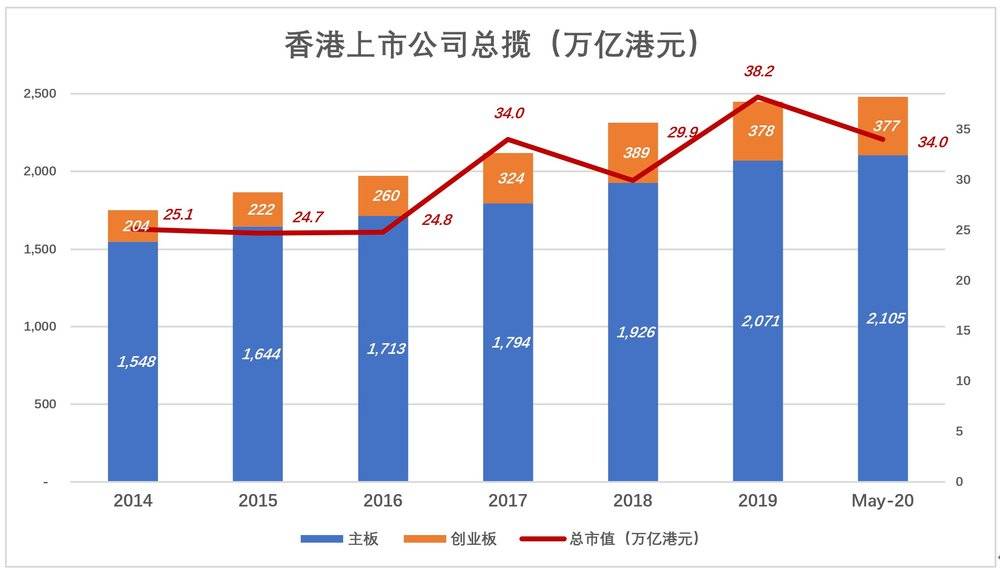 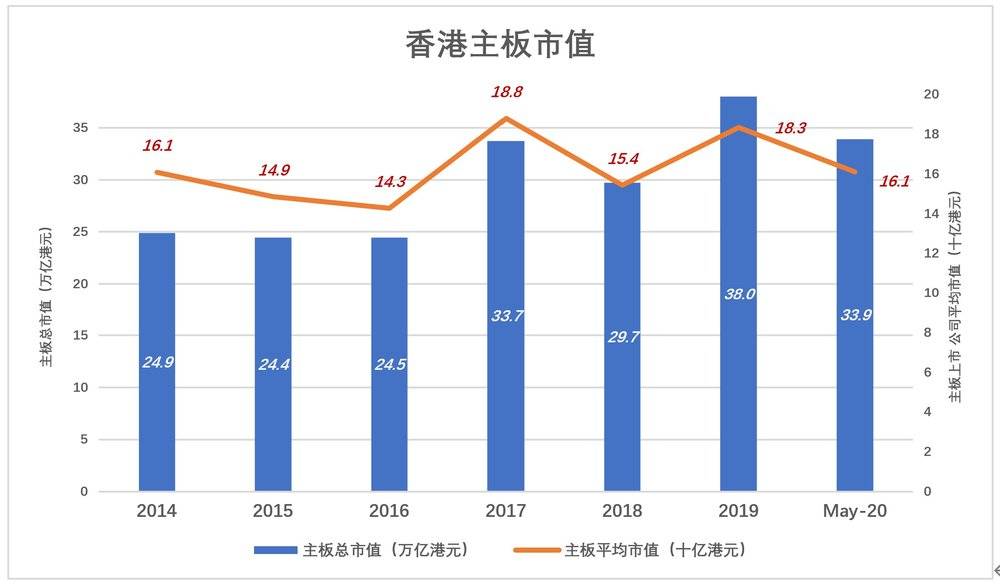 In the bleak 2012, there were only 64 company IPOs on the Hong Kong Stock Exchange, 52 on the Main Board and 12 on the ChiNext.

In 2017, the total number of IPOs rebounded to 174, but GEM companies with small financing scales accounted for 80 seats. This year, refinancing accounted for 78% of the total funds raised on the Hong Kong Stock Exchange, while IPO funds only accounted for 22%.

In 2018, when the “same share with different rights” was opened, the number of IPOs on the Hong Kong Stock Exchange reached 218, with 143 on the Main Board and 75 on the ChiNext.

In 2019, the number of IPOs reached 183, with 168 on the Main Board and 15 on the Growth Enterprise Market respectively. Main Board IPOs accounted for more than 90%. The 15 GEM IPOs raised a total of 97 million Hong Kong dollars, accounting for 0.2% of the total funds raised by all companies on the Hong Kong Stock Exchange, which can be ignored. 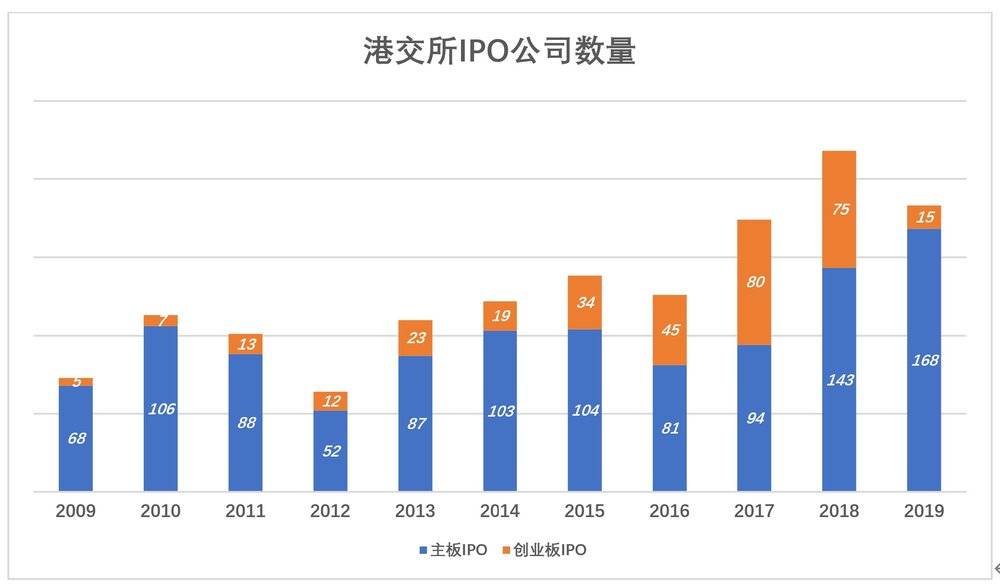 In 2018, the number of IPOs reached 218, and the funds raised were 288 billion. Since 2011, the amount raised by the Hong Kong Stock Exchange IPO exceeded the refinancing for the first time.

This cannot but be said to be the credit of Li Xiaojia's move away from the "same share with the same power" mountain. The three companies with the most IPO financing in 2018 A total of HK$134.6 billion was raised, equivalent to US$17.2 billion (accounting for 47% of the annual IPO proceeds), which is US$3.7 billion more than the total IPO proceeds of the Shanghai Stock Exchange. Among the three companies, Xiaomi and Meituan have adopted "AB shares." Structure.

In 2019, the funds raised by the Hong Kong Stock Exchange fell again. IPO raised and refinancing were 313.3 billion and 140 billion respectively. 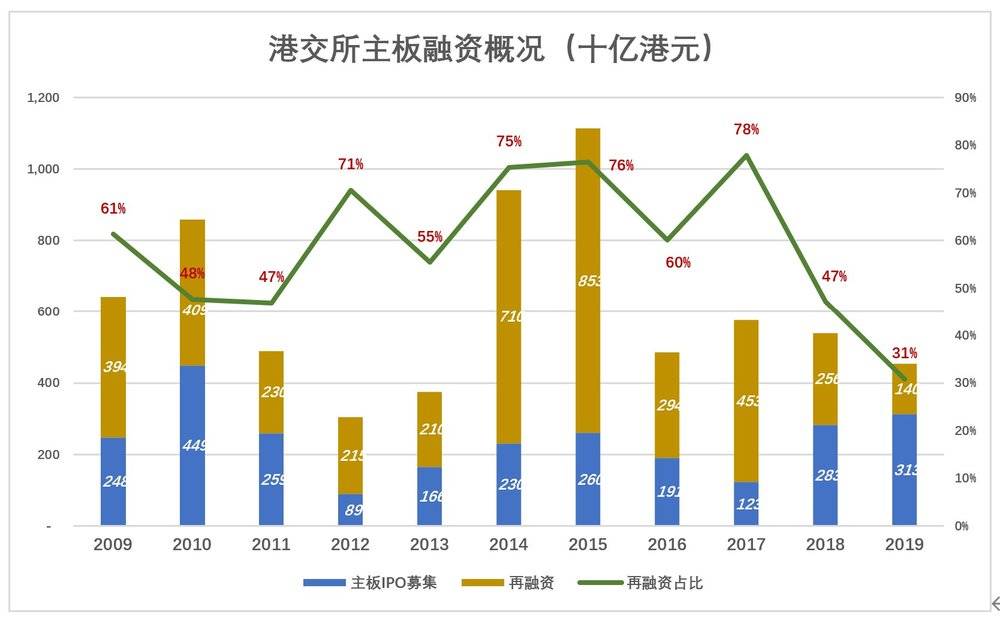 As of the end of 2019, There are 1241 mainland companies listed on the Hong Kong Stock Exchange, of which 1144 are on the Main Board and 97 on the Growth Enterprise Market. 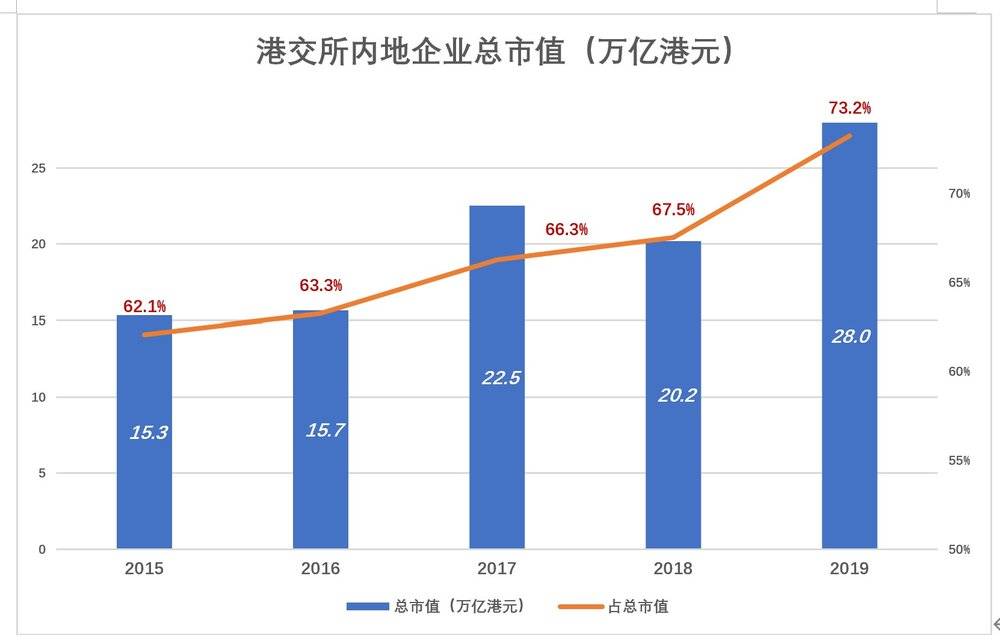 As of the end of May 2020, the total market value and total transaction volume of mainland enterprises were respectively It accounts for 76.9% and 81.9% of the total market of the Hong Kong Stock Exchange.

Mainland companies are also the protagonists of IPOs, firmly occupying the top ten in annual IPO financing. Since 1986, nine of the top ten IPOs are from mainland China, and the number one is Hong Kong-based AIA. The second to fifth places are ICBC, Ali, Agricultural Bank and Bank of China.

The overall data of the Hong Kong Stock Exchange is still plausible, and some indicators can even rank first in the global exchanges, but this is a high degree of differentiation. Market. The main board companies have eliminated dozens of dominant companies, and the rest are "junk"; the GEM is all rubbish.

On November 25, 1999, Hong Kong’s GEM started trading, and the first seven companies "starred", the limelight far exceeded that of the main board IPO at that time Upstart. In 2000, the listing of heavyweight companies such as TOM triggered a subscription frenzy. 47 newly listed companies raised a total of 14.8 billion funds, an average of nearly 300 million each.

In 2018, 75 companies IPO, the average raised amount fell to 68 million, equivalent to 8.7 million U.S. dollars, lower than the A round of financing of many startups.

I was wasted for nearly two decades, and Hong Kong’s Growth Enterprise Market did nothing. It did not have the slightest appeal to higher-quality technology companies.

After joining the WTO in 2001, China has assumed the obligation to gradually open its financial market. By April 1, 2020, China’s financial market has been fully opened to foreign investors-foreign financial companies such as brokers and insurance companies. , Futures companies, and rating agencies can all come to China to open wholly-owned subsidiaries, but banks are not included.

It should be noted that my country’s opening up is the financial market, not the capital market.

Some experts advocate faster and more thorough opening of China’s capital market for no more than “accelerating the internationalization of the renminbi”, “reducing international trade frictions”, “forcing domestic economic reforms”, etc., which are listed beautifully in textbooks. However, the real world is full of painful lessons that have rashly opened up capital markets and were bloodbathed by international capital. There are as far as Latin America, Japan, Russia, and Thailand.

After the Asian financial crisis in 1997, scholars with conscience have begun to weigh the pros and cons of fully opening up capital markets in developing countries.

In the 2008 financial crisis that originated in the United States, if China had implemented the free flow of capital, the wealth created by the reform and opening up in the first three decades would be looted.

The opening of China’s capital market still has a long way to go. For a long period of time, there will still be a “wall” to protect our financial security. #Maybe it has to wait until China becomes the world's largest economy, and the rules of the game are set by China#

Hong Kong is China's "window" to the world. After the "wall" is demolished, the "window" no longer exists; if you don't plan to "demolish the wall", you must keep the "window".

Shanghai and Shenzhen "inside the wall" cannot allow capital from all over the world to flow freely. In all aspects of listing rules and regulatory systems, it is impossible to carry out overly radical reforms to maintain policy continuity, let alone copy Nasdaq.

Capital cannot flow freely, supervision is different from Nasdaq, and it is incompatible with companies from all over the world. How can it become "Oriental Nasdaq"? Hong Kong, "outside the wall", once again has a historic opportunity.

Why does the Hong Kong Stock Exchange?

The glory and loneliness of the Hong Kong Stock Exchange will eventually become the past. Its future depends on three factors:

First, high-quality enterprises. The best and most innovative companies in the world’s second largest economy flock to the United States. Now Ali, NetEase, JD.com, and Ctrip have made two IPOs in Hong Kong, plus the listed Tencent, Meituan, and Xiaomi. The camp of high-quality new economy companies on the Hong Kong Stock Exchange is spectacular. There will be more in the future, perhaps Ant Financial, ByteDance.

The second is funding. Capital is profit-seeking. Many high-quality targets are publicly traded on the Hong Kong Stock Exchange. Funds from the United States, Europe, Japan, and South Korea will not want to participate. State-owned financial institutions with huge amounts of capital are absolutely impossible to invest in Nasdaq with hundreds of billions of dollars. Going south to Hong Kong is the platform for Chinese high-tech enterprises, and they can also share the "wealth feast", killing two birds with one stone. In addition, there are private capital seeking high-quality investment targets.

With many high-quality companies, sufficient funds, and world-leading financial infrastructure, but also "outside the wall", The Hong Kong Stock Exchange is the promised land of NASDAQ in China.